Anyone following comics blogging/reviewing/criticism will know that David Mazzuchelli’s long awaited Asterios Polyp was not only predicted as one of the best comics of the year before it came out but also highly praised all over the place (on and offline) when it came out. I’ve been following a lot of the reviews and articles and have so far avoided posting on it. I tend to not post on the really big comics: sometimes because I haven’t read them, but often because I don’t think I have anything worth adding to the conversation.

But, having read a bunch of reviews on Asterios Polyp, I found one aspect missing from the commentary. No one mentions the ending (actually, since I started this Matthias Wivel does reference it in his post). I understand that in a straight-up review context endings are often considered off-limits spoilers, but surely for such a widely praised book, there’s room to assume many have already read the book by now.

The ending was one of the semantic aspects of the book (that is, not the formal elements like style, color, layouts, and all the other things Mazzuchelli has been highly praised for) that really struck me on reading and rereading.

(Stop here if you haven’t read the book and care about knowing the ending ahead of time.)

To summarize the story: Asterios Polyp loses his apartment in a fire caused by a lightning strike and abandons his life. He takes a job at the first place he comes to, working as a mechanic and living in a room in his boss’s house. He learns a little something about himself (in a rather oblique way). Through this time are interspersed flashbacks to earlier in his life, focusing on his relationship with his ex-wife Hana, their meeting and their time together. Back in the present, Asterios gets in a car and drives to see Hana. They talk, they reconcile. An asteroid is shown about to crash into the house where they are peacefully sitting. The End.

Yes, the book pretty much (except for a scene where the son of Asterios’ new boss thinks the asteroid is a shooting star (perhaps a commentary back to earlier parts of the book about individual’s perception)) ends with a meteor about to kill the protagonist and his love. I have no doubts that we are to infer that the meteor will strike the house and kill Asterios and Hana. In a two page spread the meteor is much larger then house and on a clear trajectory towards it.

This book is filled with dualities and commentary on dualities, so it is no surprise that this natural disaster which ends the book is bookended by a natural disaster that starts the book: a lightning strike causing the fire in Asterios’ apartment. The image of the lightning strike shows it nearly striking Asterios as he sits in his bed watching a video tape of what we (later) assume is he and Hana making love. [Edit: See comments below for Travis’ correction on what the video is actually showing.] The present of the book’s narrative becomes a slight reprieve for Asterios.

I specifically use the term “asteroid” for the object at the end of the book, because earlier in the book, that term is used. A character, Steven, from a previous Mazzuchelli story (“Near Miss” in Rubber Blanket #1) makes an appearance in a diner and talks about asteroids crashing into the earth and how they could cause the extinction of humanity. That “asteroid” is so close to “asterios” can be no coincidence, considering the very pointed names Mazzuchelli uses throughout the book. The asteroid causes not the end of humanity but the end of Asterios and the story.

Early on, when we are first introduced to the idea of Asterios’ twin, Ignazio, the two are shown as babies, in two separate panels, yet shown in a very clear black/white, up/down, ying-yang way. This sense of completeness and halving haunts Asterios (note the dotted online figure that follows him into the subway early one as well as the various dream appearances of Iganzio) and motivates his obsession with duality, which is carried through into the form of the book itself.

The posture, the fitting together, of Asterios and Ignazio is mirrored in a scene showing an early part of Asterios and Hana’s relationship. After they first (first?) make love in Asterios’ apartment, he admits to Hana that he tapes everything that goes in the apartment. At first she is upset, violated, angered, but then he tells her about Ignazio, about his sense of loss. She is mollified (though I have to say, I’m not sure the sob story makes up for the violation), and they are shown lying together curled head to foot like the earlier images of Asterios and Iganzio, the balancing ying-yang. This connection is all too explicit. 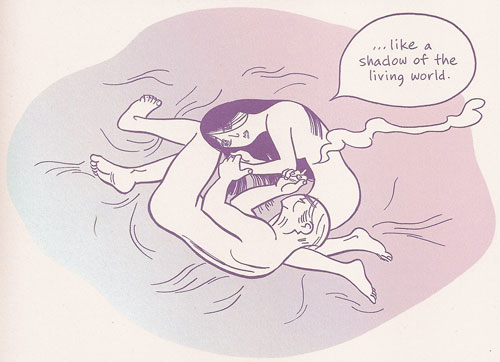 Two pages before the final asteroid appearance, as Asterios and Hana are reunited, the climactic moment is their simultaneous quoting a reference to a statement heard twice earlier in the book by Asterios’ mother: “Life is stressful. That’s why they say ‘rest in peace’.” They simultaneously say “rest in peace,” which is visually evoked with an overlapping of Asterios’ square and Hana’s circular word balloons. After a long voyage they are reunited, like the earlier ying-yang, like Asterios and Iganzio, like Asterios’ birth and now, at the end, his death. Another duality, yet this one is not a duality but a tripartite joining of Ignazio/Asterios Asterios/Hana.

This death is not unexpected. Note Asterios on astrology: “Let’s just say I have trouble with the idea that objects whirling through the firmament have a direct impact on my daily life,” or a discussion of the Greek gods and their responsibility for “random events of joy and tragedy that befall human beings.” Even the evocation of “who knows which day will be his [asterios] last,” point to the ending, and it’s seeming combination of total random accident and fated tragedy. This chance/fate duality is evoked earlier when Asterios discusses his birth and the death of his twin. The broken ying-yang image is referenced though not expicitly repeated, and interestly enough, a lightning bolt image is used to separate the two baby twins. A lightning bolt that Asterios dodged, not unlike where the story begins. The beginnings of the story as told and the whole narrative (if it were organized chronologically) are linked.

Is it tragedy? The Orpheus dream sequence might lead one in that direction, but Asterios’ death is not necessarily a tragic death. Consider the distance between the potential death at the beginning of the story–lightning strike or death in a fire–and the implied death at the end. At the beginning, Asterios is alone, seemingly depressed, and looking backwards, reliving(watching) the past. Death is avoided, temporarily, and in this reprieve he makes amends with Hana, he even finally builds something (a treehouse). The whole story is like a moment of grace, an opportunity for happiness for Asterios. Orpheus is granted this opportunity, but he loses his chance. Asterios’ Orpheus dream is what could have been but is not. He gets his love back, if only long enough for some peace before they both move onto rest in it.

Here are a few reviews and notes, in case you missed them: