And back into a science fiction future, with robots! This isn’t one of my favorite stories in the series, though it has its moments. The narrative rambles a few times. “Resurrection” does offer another variation on themes of immortality and questioning what is “human.”

The story begins in 2482 with the death of Leon (a young man) as he falls from his flying car to the ground far beneath. He finds himself floating in the nothingness that is some part of the afterlife. But a bright light appears, he goes to it, and he is revived. Leon is brought back to life as a cyborg with an almost completely artificial brain. In what is the most interesting part of the book, Leon’s new brain does not function exactly right. He sees all living things as inorganic matter: large talking sandstone structures, spiky coral-like objects. Throughout the first fifty pages of the book, Tezuka only shows humans other than Leon from Leon’s perspective. He breaks this perspective briefly to show a scene outside of Leon’s knowledge (two other characters discussing Leon’s situation), but otherwise over the course of the book the humans from Leon’s perspective slowly become more recognizable and “normal” looking, from completely abstract to rocky looking (kind of Thing-like) to just being shaded gray. Tezuka admirably takes this interesting concept and carries it through the book, slowly showing Leon’s brain re-humanizing his surroundings.

While Leon sees people as objects, he sees one robot as a human, a young woman wearing a head covering with long “ears” (actually her antennae). Leon falls in love with this robot, and, somehow, it falls in love with him. Why Leon sees the robot this way is understandable, but why the robot seems to “feel” for him is never really addressed. They cling to each other’s companion and struggle with the robot being owned by a corporation that will not let Leon buy her away.

Leon quickly realizes his death was a murder, so an early part of the story has him investigating his own death. This leads him to the United States and the discovery of a forgotten part of his life just previous to his murder. He was yet another phoenix hunter, though Leon succeeded in killing the mythical bird. Before it rose from the ashes, he took some of its blood. Afraid to drink the blood, he buried it. Later, his family, unsure if he was immortal or not, kills him, then has him revived to get him to lead them to the hidden blood (another case of the horrible things people do in the search for easy immortality). He discovers all this back in the U.S., even finding the phoenix again. The phoenix warns him not to drink the blood, and convinces Leon that even if he kills himself, society would not let him die because of his unusual circumstance as the first person to be brought back from the dead cybernetically. He would just be brought back again, perhaps even more “wrong” than the last time.

The phoenix trying to convince Leon not to drink it’s blood is interesting in the light of the ways the phoenix has used its blood in previous stories. In “Future,” it has Masato drink the blood so he does become immortal and live through the destruction of the world. In “Yamato,” it gives Ozuna enough blood to keep the king’s sacrifices alive longer than normal. In “Space,” it tricks Makimura into tricking its blood, causing him to be forever punished growing old then young then old again. So why does it so explicitly warn Leon against drinking the blood? It seems to see the blood as a special gift or as divine punishment. I imagine one could reread this series focusing exclusively on the phoenix as character and divine entity.

(Back in the story) as Leon’s family arrives, following him to get the blood, Leon burns the phoenix blood. His family are in disbelief, they want the immortality, but Leon replies: “The only problem is… once you’ve attained immortality… What reason is there to live?” (170) He returns back to that ongoing question of the series: “What kind of life should I lead? How can I live this life to its fullest?” (173) Oddly, Leon does not address the answer. By the next scene he is begging the doctor that revived him to let him die or make him fully a robot. He doesn’t want to be part human/part machine. He runs away with his robot love, and Tezuka takes a detour through his encounters with a group of smugglers that ends with Leon and his robot love being merged into a single robot body (by a kind of crazy doctor figure).

This is a good time to point out that, the chapters in “Resurrection” are all dated with years and they are not completely linear. Like the Phoenix series itself, this part of it jumps around in time. Leon’s story in 2482-2484 is interspersed with chapters in 3030, 3009, 2917, and finally 3344. In these chapters we see the story of Robita, a model of robot (that looks a lot like the robot from Lost in Space). This robot, though out-of-date, is beloved by children and others for a certain human aspect lacking from other robots. We see a group of these Robita’s wrongly blamed for a boy’s death. When that group is sentenced to be destroyed, the model collectively commits suicide. The only one that remains is a single model living on the moon, who is unable to join his fellows. In a struggle to show its portion of humanity (and that it is more than just programming), the Robita causes its owner’s death.

Tezuka plays out these parallel stories of Leon and the Robita so that, at first the connections are not clear. The Robita plotline starts with the mass robot suicide and then fills in the background on the events that lead to it (showing us that mass suicide multiple times with new context for each repetition). As Leon’s story moves forward, the Robita story moves back, and the connection becomes clear that Leon and his robot love became the original Robita, later mass-produced. The Robita’s claims of some portion of humanity are true, and the mass suicide becomes the fulfillment of Leon’s wish to die, a move against immortality, and also a robotic sign of self-determination.

Yet, in the final scene, the last Robita, alone on the moon, has a visitor. A rocket lands carrying Professor Saruta, the same Professor Saruta from “Future,” and the reader realizes that this Robita is the same robot seen with Saruta in that previous story.

In the end, how does Leon lead his life to the fullest? I don’t think he does. He abandons his humanity, then as a robot, struggles to maintain it, still not completely human or machine. In “Future” man is dehumanized by the computers he lets control the great underground cities, but here in “Resurrection” even becoming a robot does not destroy Leon’s humanity, though this humanity, that of the Robita’s, takes its ultimate form in suicide and murder. Is this a sign that man cannot escape his worse nature? Yet the final Robita, left alone on the moon, meets Saruta and decides to stay with him. Saruta laughs to himself: “All the women of earth treat me like a monster… and now… out here… a robot falls in love with me.” (316) The very last speech in the story points back to man’s better nature, even when encased in a robotic body.

As often as Tezuka’s work can, on the surface, appear simplified, black and white, with caricatured villains, he never offers any easy answers to the questions that rise in his work. The complications of the stories only grow as one rereads, leaving me to write these inconclusive posts as I work my way through a third or fourth reading of most of these stories. Like this series itself, which remained unfinished at Tezuka’s death, any clear thematic readings remain inconclusive, especially in this story.

As I noted above, the first scene where Leon is revived from his death are the most interesting scenes in the book. Here’s the first two pages of Leon revived: 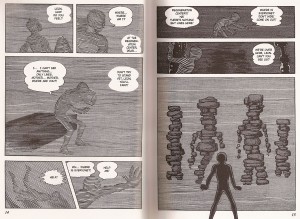 At first he unable to see anything at all except lines, almost like the static of a television. Then he comes face-to-face with his distorted view of people (the doctor, his mother, and others). Tezuka shows us Leon and his surroundings as Leon perceives them, stressing the disorientation and sheer terror Leon feels. In an attempt to fix this perceptual problem (people as objects like sandstone, Leon even tells us they feel like stone), the doctor works on him again (effectively killing and reviving him a second time). Which leads us to the following page: 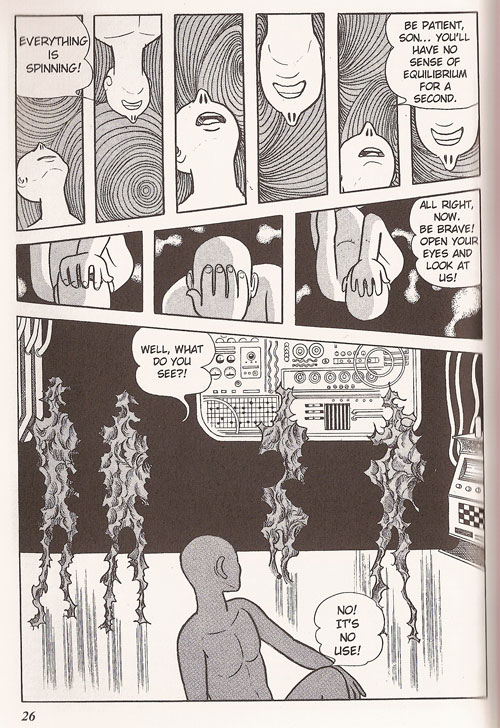 Here Tezuka stresses Leon’s vertigo at coming back to consciousness, showing a wonderful sequence of panels where Leon is flipped back and forth before he is faced with a second, even more distressing view of the people around him. 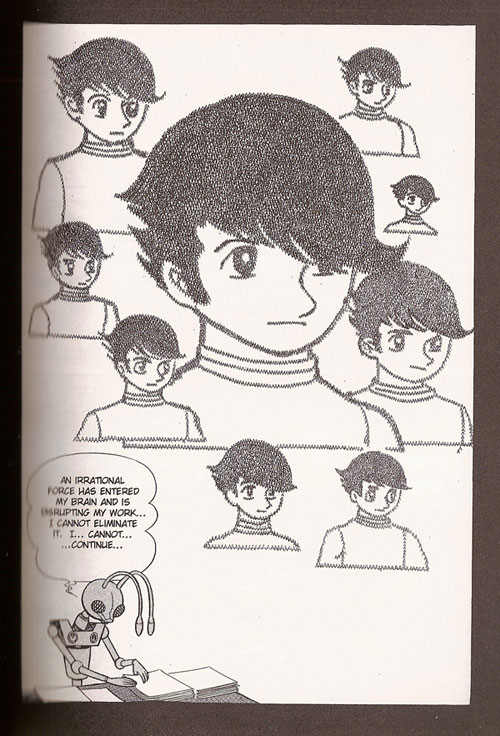 This page shows Leon’s robot love, as she appears to everyone but Leon, thinking about Leon while she should be working. One can almost see the robot as a high school girl sitting at her desk thinking about a new boyfriend. Leon’s head floats above the robot as she thinks of him. To stress the robotic brain, Tezuka is actually representing Leon through an dense overlapping of the letter “A.” 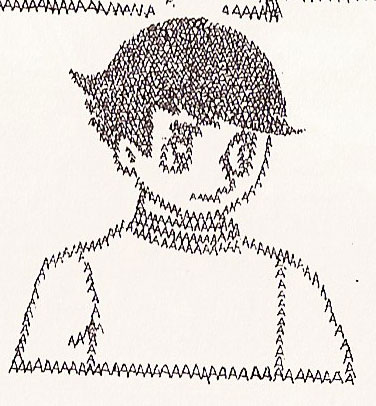 Next up: A detour into Volume 8’s “Robe of Feathers”, which is the next story in the series, but so short that Viz placed it at the end of Volume 8.