See previous post on the first half Phoenix Vol. 3: Space.

If I were to recommend a single volume of Phoenix to a new reader, it would have to be Volume 4: Karma. This story can work well as a stand-alone and showcases a number of the ongoing themes of the series such as suffering, the transmigration of souls, karma, and religion as politics. Plus, it’s got a number of bravura visual displays by Tezuka. The story follows two protagonists, Gao, a one-armed criminal who becomes a sculptor and spiritual figure, and Akanemaru, a famous sculptor. The two men’s paths cross numerous times over the course of a lifetime, bookended by each becoming the cause of the physical maiming of the other. Early on Gao, then an outcast and killer, slashes Akanemaru’s arm, permanently damaging the hand he used for carving. Near the end, Akanemaru exposes Gao’s early crime to a wealthy patron and has Gao’s other arm cut off. In between the men go on differing journeys.

Akanemaru’s journey starts with his injury by Gao. In a nearby monastery he meditates and slowly comes back to sculpting despite his injury. He notes how conceited and overconfident he was and claims to have changed. For a time, he does. He creates sculpture for its beauty, for its own sake, devoting all his effort to it. Soon, though, a powerful lord forces him on a mission to sculpt the phoenix. Akanemaru is given three years to do it or else he will be killed, thus begins his travels to find visual evidence of the phoenix. As his three years ends, still having found no evidence of the phoenix, he carves a beautiful representation of the goddess of mercy using a woman companion as his model. This point in his story seems to be the apex of Akanemaru’s story, this work of extraordinary beauty which he creates for its own sake. The choice of the goddess of mercy is ironic given his later lack of mercy for Gao at their final encounter, an indication of his downward trajectory.

Dragged back to court Akanemaru is saved by another powerful man, who gives him access to a tapestry of the phoenix. The sculptor has a vision before the image, one of the most interesting scenes in the book. The phoenix reveals to Akanemaru the transmigration of souls through the sculptor’s own future (this is not indicated at the time, but by the end of the volume we understand this scene as his future lives). First a tiny sea creature, then a turtle, and then a small bird who finally meets the phoenix. Tezuka’s representations in this sequence are stylistically variable. The pages with the turtle are drawn with a certain realism, the turtle looks like a real turtle and has neither word nor thought balloons, while the bird pages show the bird as a Disney-esque little creature who speaks aloud. Tezuka never shies away from mixing styles to fit his needs, a trait both unusual and admirable in a comics artist. When representing statues, including the Buddha statue, or even discussing the religion, he uses a densely hatched style, which stands out greatly from the rest of the book’s images.

After his vision, Akanemaru can create his phoenix sculpture which leads him to be the head of a project to create a giant Buddha statue. Tezuka shows the sculptor’s attitude changing as he becomes more embroiled in the politics of the statue. His concern becomes, like many previous characters in the series, with his own immortality, taking the form of his memory living on through the statue (much like the king in “Yamato”). As drought hits the land and people are starving Akanemaru, unconcerned, continues his political sculpture, the Buddha, an emblem of the government’s use of religion as a controlling device. Akanemaru returns to his conceit and overconfidence. Finally, in a challenge to build gargoyles for the Buddha statue’s temple against Gao, now also a famous sculptor, he, realizing he is losing the competition, exposes Gao and his crimes. He is even the one who suggests the removal of Gao’s remaining arm. Akenamaru turns away from mercy, from art for its beauty, and he is punished for this (I assume this is why he is punished). He dies in a fire, and the phoenix tells him that he will never be reborn as a human again.

Gao’s journey takes a different trajectory. We see his early deformity–the result of his father slipping on rocks and dropping him just after his birth–and how he is made an outcast by his village. He turns into a killer, a bandit, unrepentant, blaming society. A woman becomes his catalyst for transition. He kidnaps her early on and forces her to live with him for a long time, before, tricked by his bandit companions, kills her. Over the course of this time, his nose slowly grows and becomes deformed and bumpy, placing him in line, once again, with the big-nosed Saruta’s of previous stories.

Captured as a killer, he is rescued and forced into servitude to a traveling monk. His spiritual transformation begins. The monk teaches him about the transmigration of souls. Gao blames society for how he turned out, but the monk blames karma: “You bear no responsibility for what you’ve become. The cycle of transmigration of souls is to blame.” (79) He further explains: “You may have been human once too perhaps millions of years ago… or in the distant future. The fact that you had to kill people and that you suffer with that hideous nose may be retribution for actions in your former life.” (86) This idea of “karmic retribution” points to the previous story “Space”, where Saruta was punished by the phoenix at the end, “Your face shall become ugly… and it shall remain so from generation to generation.” (320) With the cycle of rebirth and the circle of narratives in Phoenix, we can read Gao’s suffering as part of the karmic retribution for Saruta’s actions. This reading is further bolstered by a later vision of Gao’s where the phoenix shows him some of his future selves, including one who seems to be the Saruta of “Future”.

This concept does seem to negate the idea of personal responsibility. What is Gao’s responsibility if he is a killer because of a previous life’s actions? That’s a philosophical or theological discussion that I am not prepared to address. Perhaps this issue is one of the main themes in the series, not just how to live or make use of one’s life (see “Future” and “Yamato”), but the interplay of choice/fate and personal responsibility/karma.

The monk also directly addresses one of the other ongoing themes of Phoenix, the political use of religion. The importation of Buddhism into Japan was, as I understand it, largely a political act. Buddhism was used to help cement the control of the rulers. We see this in this story, and as directly noted by the monk: “Buddhism is only a vehicle for the authorities to deceive the people. And make them obedient and willing to pay heavy taxes.” (117). Aspects of this theme are seen in the political machinations behind the great Buddha statue that Akanemaru works on and will also be seen in future stories such as “Sun.”

After hearing the monk’s statements about this, Gao flees to a nearby village, where the people live in fear of evil spirits. In anger and desperation he carves a sculpture as a totem for them. He uses his anger and suffering to make art that is beneficent to the people. The monk tries to convince him that this is his role in life, as a sculptor.

Gao continues to endure much suffering during his life. He puts that suffering into his art, creating fearsome sculptured figures even while locked away in a dungeon. Eventually he comes to the point of the contest against Akanemaru. He has a vision. The phoenix shows him the suffering of his descendants. He ends up, as mentioned, getting his other arm chopped off and is let go. Gao becomes a kind of wandering mystic. He sits atop of hill and cries at the beauty of the world and the life that fills it, despite all the suffering. He decides to live as long as he can and to help other lives. 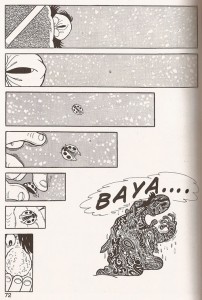 In the above, I neglected to fully explain the woman that becomes Gao’s companion. After killing her, Gao discovers that she was somehow a reincarnation (or something) of a ladybug he saved earlier in the book when he was being chased down as a killer. This is not clearly explained, since if it was a real reincarnation she would have no memory of her former life. I guess she is more a spirit. Anyway, this page takes place after he has killed her. Her body disappears in the snow, and he finds only a ladybug. Not only is this an interesting page layout, with the panels shrinking down the page as they focus in on the ladybug, but that out-of-panel, isolated image of Gao as he screams out her name is just crazy. The psychedelic, paisley pattern that fills in his silhouette is a shocking change and looks like he was covered in paint and is melting away. 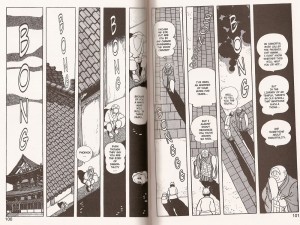 This two page spread stopped me when I was first reading the book. Tezuka puts a lot of movement into these panels, though not of the character action type. The first page starts with the house, and then Akanemaru appears at the bottom. He moves up the page as the panels continue. Notice all the diagonals that also move up and across the page. Panel five finds us reading the word balloon that comes from the body and then moving down the page along with Akanemaru’s head (he imagines his own execution). This movement handily leads us to Akanemaru on the next page, now at the bottom of the page again. We follow back up the panel to the monk in the distance, then down the next panel as the monk approaches. Back up and down again for the last two panels to follow the characters and the words (as well as the dark shadows that point from the figures in the penultimate panel to the figure in the last panel). This up and down movement is punctuated by the “Bong” of a bell, a bell tolling for Akanemaru, perhaps in the “for whom the bell tolls” manner. The up and down movement of the panels echoes the oscillation of a bells sound, soft to loud to soft. Also notice the way the first and last panels are quite similar in composition. 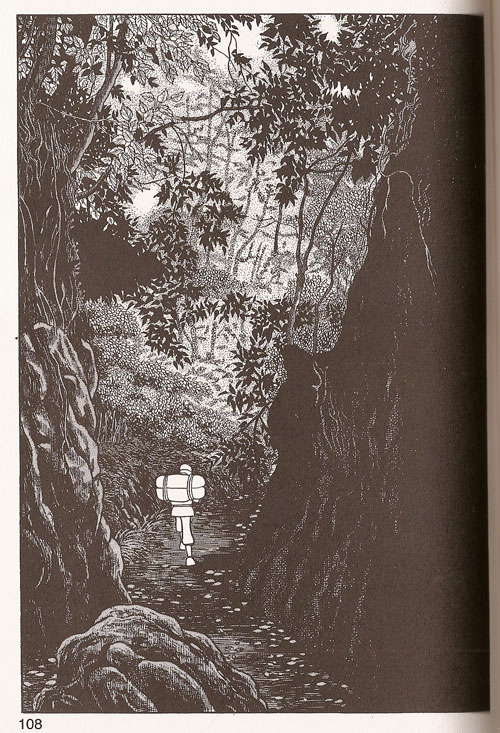 This is just an example of the lush backgrounds Tezuka frequently uses as full page images. The dense, patterned, and realistic background is in contrast with the bare, abstracted rendering of Akanemaru as he travels. This is much like the examples McCloud uses in Understanding Comics of “masking.” 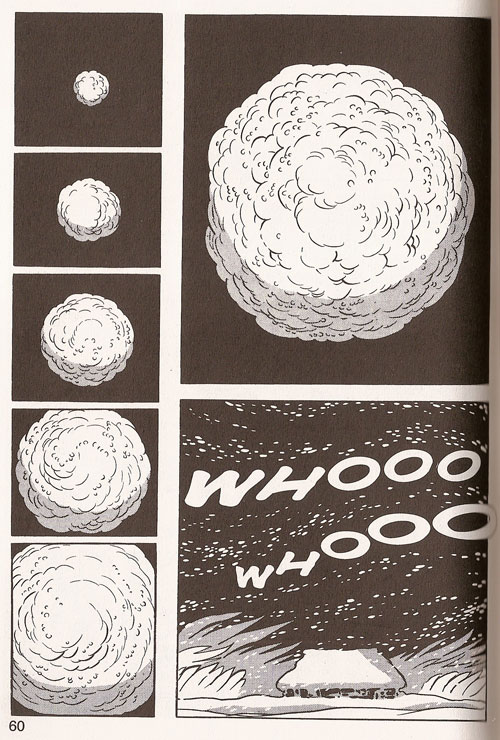 An example of Tezuka’s humor and cartoon sensibility. This looks right out of an old Warner Brothers cartoon or the like. I know I’ve seen a similar animates sequence before, where a giant snowball falls to the earth and, wham, the earth is covered with snow.

Next up: Volume 5 “Resurrection.”