See previous post on the first half Phoenix Vol. 3: Yamato.

Viz’s Volume 3 continues with “Space,” which oddly enough is called “Universe” in the chart of stories at the back of each volume. Translation issues? Neither are evocative nor apt for the story, other than the fact, that, yes, much of this story takes place in space. We are now in 2577 A.D. (Tezuka is careful to note the year at the beginning of most of these stories.) In the depths of space five astronauts are on their way to Earth in a trip that takes them many years. They sleep in special cryogenic chambers, taking turns navigating the ship. I’ll say for the record, right here, that the logic of most of the technology and the way these characters are aging makes no sense to me. I’ll chalk it up to this being a story where that’s just not important.

One of the astronauts, Makimura, seems to die while navigating, causing an accident and forcing everyone to abandon ship. Floating through space in tiny individual escape capsules, the group can talk to each other and discuss the idea that perhaps their comrade was murdered. They also discover that Makimura’s capsule is following them, though who is in it, they cannot tell. After many months of travel (another example of what must be a horrible event getting glossed over by Tezuka, not at all dissimilar to the living burial in “Yamato”) two astronauts, Nana and Saruta, as well as the Makimura capsule end up on a strange planet. Throughout this section and while on the planet, we learn, through various embedded narrators, the story of Makimura and how he become immortal, but uniquely forced to grow old then young then old again in an endless cycle.

The previous stories (and most, if not all, of the others) have external narrators. Narrative text from a character outside the story is used to fill in information like historical information. Generally we would associate that with the voice of the author. “Space” is actually narrated by Saruta — another, third, character with that name and a big nose. At one point during “Dawn”, Saruta is bitten by many bees and his large nose becomes all bumpy and ugly. By the end of this story, the Saruta of “Space” also becomes afflicted with a large, bumpy nose (did Tezuka hate big noses that much?). Why Tezuka chose to use the internal first person narration I am not sure. Saruta does not provide any emotional register nor does he provide information that could not be given through the external narration. It might be more successful if Tezuka placed Saruta as an embedded narrator where we see him telling the story to someone.

Makimura’s story, and the parsing out of that story, is the primary focus of “Space.” His story is, early on, obscured by a red herring mystery of his “murder” by one of the other astronauts. This allows Tezuka to fill in background information on the astronauts, primarily to tell us how the female astronaut Nana really loved Makimura from the beginning. Tezuka makes use of a number of narrative levels in this story. That is: narrators telling us a story within which another character narrates a story. At one point we have Saruto telling the story of himself, being told a story by the phoenix who tells him a story about Makimura, in which Makimura tells a story to his alien wife. You could make diagrams, but I’ll restrain myself.

In the end, Makimura was tricked into drinking the phoenix’s blood, causing immortality but in the way mentioned above where he is constantly growing older then younger. The phoenix seems to be the one enacting this on him as a punishment for killing a large number of aliens (including his alien wife). The planet to which the surviving astronauts have been led (by the phoenix it seems) is some kind of prison planet. This story finds the phoenix acting less as guide or guardian but as punisher, as the vengeful god. Makimura becomes an immortal prisoner on a harsh planet, a kind of hell, which seems much more Christian then Buddhist (though again, I am no expert). Seeing the phoenix as a punishing, disciplinary entity is a change from the previous incarnations, though it is fitting that, once again, it’s all about time and cycles of time. Makimura’s life becomes it’s own endless circle. Like the bid for immortality in other stories, this puts Makimura outside the natural cycle of death and rebirth.

Time, in general, is much less linear in “Space” than in the other stories, acting in a way like a detective story, where the first level of narration acts as vehicle to create a reconstruction of events previous to the beginning of the story.

I should also mention that this is the first time the phoenix is seen in space, far away from Earth, pointing to the cosmic nature of its existence, as discussed in “Future.”

The character of Nana, a female astronaut, does point to some of the issues with women one can find in Tezuka’s work. She is totally defined by her mostly unexplained love for Makimura. In the end, she sacrifices her life to care for him. The self-sacrificing woman is also found in “Future” where the alien, Tamami, sacrifices herself in an attempt to help the world. Kajika in “Yamato” is also sacrificed, though not by choice. All are also primarily accessories to the male protagonists. Nana seems the worst of the lot, though. She has no character at all, and serves as a vehicle for the men to fight over: of the three male astronauts besides Makimura, two profess love for her and become violent when rejected. This subject deserves more attention as my reading continues.

One thing that is really impressive with this story is the way Tezuka uses page layouts. He has a number of virtuoso sequences from which I would like to offer some examples. 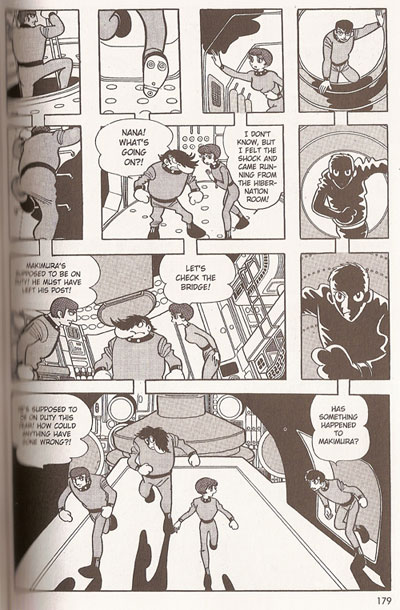 Tezuka cleverly lays out this page so that the space of the page and the location of the panels is analogous to the space of the space ship. He starts with the four astronauts in separate panels, then slowly brings them together into the single panel of the last row. On the left we see the captain climbing down a ladder as he moves down the page. Similarly, on the right we see the other astronaut running down a passage as he moves down the page. Also note that he connects all the panels together, creating a single multi-part panel that encloses the whole page and could be read in a variety of nontraditional paths. This closed-in space works to evoke the closed-in and finite space of the ship. 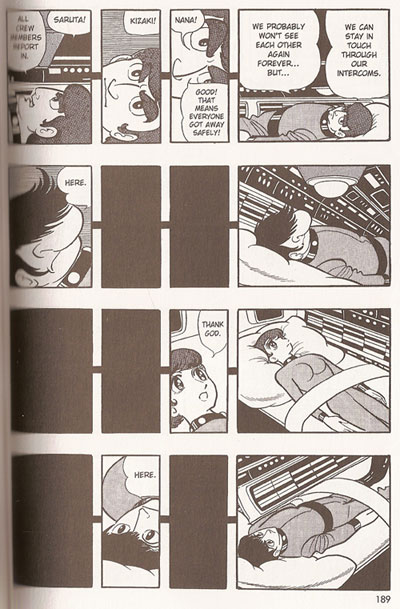 Ten pages later we find a similar yet different layout. The astronauts are now in their individual escape pods. They are cut off from each other in space, though still able to speak through radio. In this scene (which goes on for some time) each astronaut is given his own row on the page. Each panel in that row is connected to the next, yet the rows themselves are completely separate, the gutter has even been increased to further separate them. Because of this separation the reader is forced to read top to bottom, left to right. Tezuka teaches us to do that with this first page of the sequence. The captain gets each member to sound off, getting us to read from his row with the name call-outs down to the individuals’ responding. As the members of the group become separated (two of them at least) the rows are dropped off. 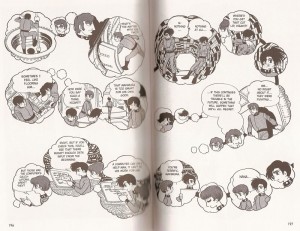 A few pages later, the characters are talking and thinking about the missing Makimura. Tezuka shifts the layouts once again, this time using a connected series of visual thought balloons. The different characters’ thoughts are traced across the page (the sequence starts on the previous page). The bottom line shows Nana’s thoughts, and the top one starts with the captain’s and twists around into the middle, which is a little more confusing. We get a few of the characters mixing together in the middle. It’s taken me a while to realize that the middle is Saruta’s thoughts, since it’s his head we see in the center (just to the right of the book’s gutter). Nana’s line of thought goes off the page; it continues onto the next page. This sequence is one of the ways Tezuka alters the structure of a page and panels to mark off narration outside the main timeline. 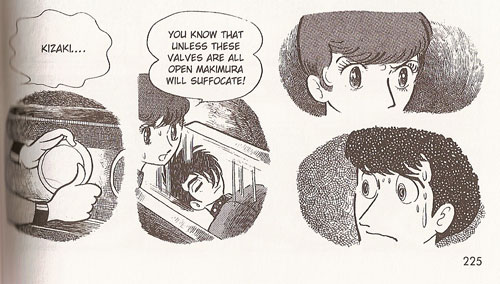 This portion of a page shows another way Tezuka demarcates levels of narration. These borderless, amorphous panels represent narration by Nana to one of her astronaut colleagues. The return to more regular rectangular panels then indicates the return to the present and primary level of narration.

Just another example of Tezuka shifting his style a bit to emphasize action.