After a little delay I’ve reached the last Phoenix story: “Sun”. This story was published between 1986 and 1988 with Tezuka dying early in 1989. It was one of his last works, and the last completed in this series. That is not to say this is the ending of the series. It is said Tezuka planned to continue these stories so that the past and future time lines converged at some point in the present. In this regard, “Sun” is an aptly fitting place for the series to stop, as the story incorporates both a past and a future timeline into the same story. 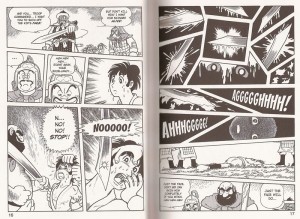 The story starts in the 7th century with the defeat of a combined force of Koreans and Japanese by the Chinese. A young Korean noble is mutilated by the Chinese. The skin on his face is removed and that of a wolf’s head is placed in its place. Tezuka evokes a sense of horror at the end of the left page, but his handling of the event at the top of right page does not quite live up to the horror. Tezuka tries to show too much while simultaneously holding back, and he doesn’t quite manage that tightrope. I want this page to be more traumatic than it is, but it almost falls into parody. That last black panel of the hatched over face is fairly effective and might be even more so without all those silly knife panels and if it weren’t so cramped in a horizontal panel.

Left to die, he somehow survives, now a human with the head of a wolf. He ends up in Japan with an old lady (she’s kind of a witch type), having rescued a Japanese general. The young man, called Kuni’ichi by the old lady, is given land, title, and name (Inugami) for rescuing the general. In his travels he also meets a clan of wolf spirits, who represent part of a traditional Japanese religion (perhaps Shinto related?). What ensues is a combination of political and religious struggle, as the emperor enforces Buddhism onto the land, and his brother struggles against him. This struggle is another repeated theme of Phoenix, the use of religion as a political tool, and the corruption of such with power.

In this case, Tezuka brings out a mythical angle to the story, putting Buddhist gods and traditional spirits into the story as characters. While previous stories have limited this element to the phoenix alone, now we see large Buddhist gods fighting against wolf spirits and bird spirits. It’s one of the many elements that point to Tezuka’s lack of interest in maintaining a narrative world consistency to this series. The fantastical/mythical/science fiction elements are added or removed as appropriate for each story. Even the phoenix itself is not always the same from one story to the next.

The past story line finds Inugami involved in the fight against both the emperor and the Buddhist gods. The emperor’s brother eventually becomes emperor and is inspired to worship the sun (he coins the term “Nippon”, the land of the rising sun). While the new emperor had fought against his brother’s enforcing of Buddhism on the land, it is hinted that the he will, in turn, force the sun religion on his subjects.

This pessimism in the face of political/religious revolutions is echoed in the future story line. The future is at first seen only as the brief dreams of Inugami when he lies unconscious/injured/sick at various times, but it takes on a greater importance as “Sun” continues with the future story line taking up more pages and becoming more clearly defined. In the future, a “light” religion, worshipping the phoenix, rules the land, while below ground live the “shadow people” who were exiled when the light religion took over. The details of all this are rather vague, but Tezuka serves up enough information to suit his purposes. Inugami’s counterpart, Suguru (who we learn is a reincarnated form of Inugami), is a spy for the shadow world, sent into their citadel to steal the object of their worship, the body of the phoenix.

Eventually the shadow people take over, lead by another Saruta (the guy with the big nose) who proclaims his plan to force his own religion, “eternalism,” on everyone. While the new emperor in the past only hints at this desire, the new ruler of the future explicitly states his plan, adding some weight to the implied sense that this will be the case for the past. Political power uses religion for its purposes, a theme Tezuka addresses numerous times over the course of this series, here explicitly shown as a circle much like the many reincarnations in the series. 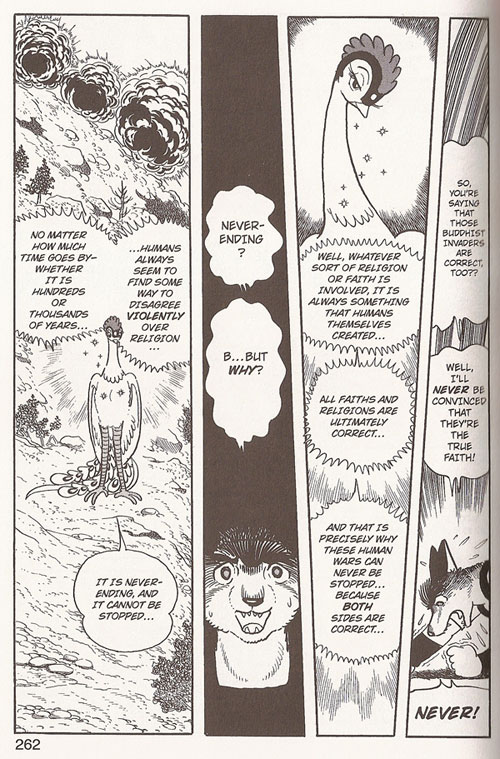 In the phoenix’s major appearance in the series, she makes this theme clear to Inugami.

Besides the war, politics, and myth that fill “Sun,” Tezuka also offers a romance plot for both Inugami and Suguru. These romances, both doomed in their own times, become, at the end, a sentimental romance between reincarnated souls. Both Inugami/Suguru and their romantic partners are the same soul reincarnated over the course of centuries. In the end they go off together into some kind of afterlife. It’s an oddly happy ending for Phoenix. 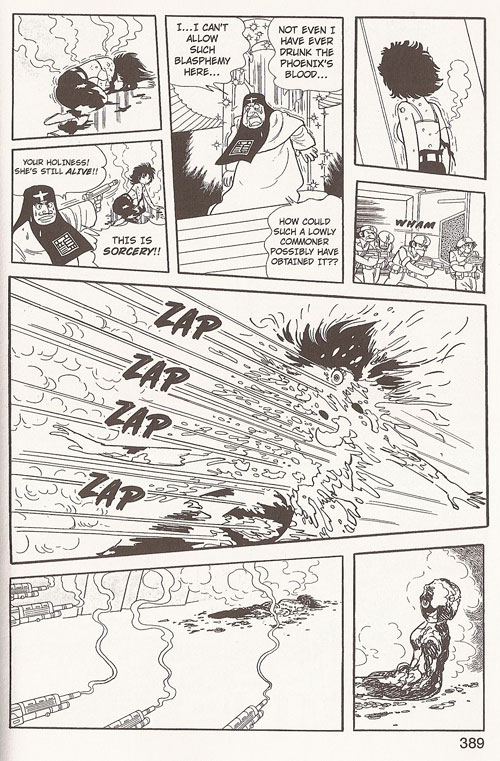 One aspect of the future story that I am a bit baffled by is the women Suguru falls in life with, Yodomi. In the future story she is somehow immortal. In a rather horrific scene at the very end, the leaders of the light religion, not believing the rumors that Yodomi is really immortal, start shooting her, firing and firing, then using a flamethrower to burn her into ashes. Yet, still she lives. Unlike the scene above with Inugami, Tezuka really makes this scene a horrific visual event, though oddly he does not play up Yodomi’s suffering. She becomes a mere physical body, mutilated, yet without continuing to speak or express any real emotion.

What I don’t get, and what I never saw an explanation for is how she became immortal. She is dying, by Suguru’s hand (they start out as enemies), and he prays for her to be saved, and then… a miracle. It’s a strange and out of norm case of a completely unexplained miracle in the series. The phoenix does not appear in a vision or anything. The woman is just healed. As if, there is something outside all of what we have seen that has power over life and death. One is tempted to say it is love itself, given the ending. It’s overly sentimental for this series. The love that extends beyond death and even defeats death, whereas previous loves in the series were delimited by a single lifetime/cycle.

I have to say, that after all this I’m a little worn out on Phoenix. I was going to write a summary/overview post, but I think I will have to leave that for another time. By its very nature Phoenix is an inconsistent series, not only because of its loosely connected narratives but also because of the long time period over which Tezuka created it (over 20 years). Some parts of it are clearly better than others. For the curious, I’d have to recommend volume 4’s “Karma” as the best single volume to read. It’s a strong narrative that incorporates a number of the primary themes of the work into one story. In general, I think Tezuka is much more successful with the historical volumes than the future volumes.

In rereading Phoenix with an eye towards writing about it as a whole, I think I would have to read it more like a novel than as a series of stories. By this, I mean, taking it as a single work to trace the themes and variations that emerge of the course of the pages. More note taking would also be needed, though in a way this series of posts is more like a series of notes for some future article than individual completed works. 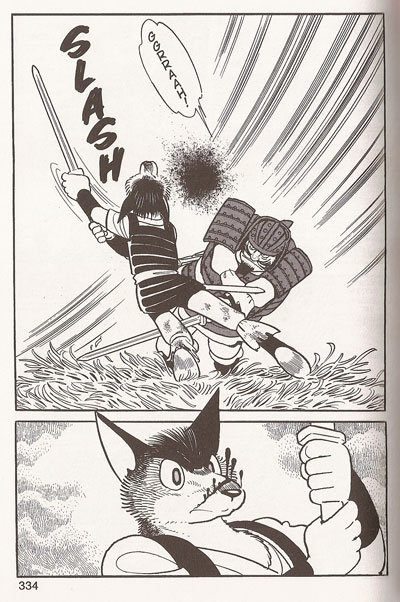 This is just a wonderful, time-stopping page, as Inugami is defeated by a rival loyal to the emperor. The first panel, with its figures posed at the end of movement and the blood floating in the air, seems to freeze time (in this sense very reminiscent of a Lone Wolf and Cub image). This frozen time is further enhanced by the second panel, not, this time, because of the figure’s pose but because of the way the blood from his wound appears to be flowing up into the air, a split second moment before gravity takes over where Inugami, eyes focused in on his snout, realizes his defeat. 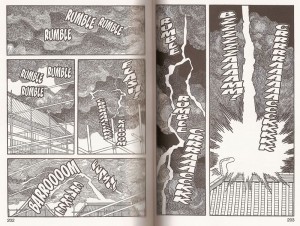 Another one of Tezuka’s abstracted sequences which, in this case, brings to mind the work of Yuichi Yokohama, with its architectural elements and prominent sound effects.

So that brings the Phoenix series of posts to an end (for now at least). Viz did publish a volume 12 which features early Phoenix stories that preceded volume 1’s “Dawn.” I’ve twice failed to read the volume because I find the stories too insipid to bear. Not recommended.