“Strange Beings” is another short Phoenix story that takes place in the past (1468 AD). This one features a young woman, Sakon No Suke, who has been raised as a man by her warrior father. When her father gets a cancerous growth on his nose (like the oft-appearing Saruta), a female monk from a nearby temple is called for and claims that she will heal the man. Sakon goes with her manservant to the temple to kill the nun before she can go back and heal her father because Sakon wants her father to die so she can live as a woman. In killing the nun, Sakon becomes trapped in the temple and its vicinity. She is forced to take on the nun’s duties of healing those that come to the temple for aid, these supplicants being not only people but “strange beings” of a mystical/mythological variety. I should note that we begin this story in media res with Sakon and her manservant arriving at the temple and killing nun. Only later do we realize Sakon is a woman and the back story on why she killed the nun.

Eventually the phoenix comes to Sakon, telling her that she is in some kind of time pocket where the same 30 years are relived endlessly. Because Sakon came to the temple and killed herself (of the future) she must relive those 30 years endlessly, each cycle concluding with her murder by her younger self. The phoenix tells her to save all the people that come for help and in doing so she might be cleansed of her sin and be released from her time prison.

Once again, the phoenix is the punisher, and a harsh one at that. Sakon only kills herself, yet must suffer endlessly for it (is this an anti-suicide tract?). I have to overlook the messiness the time paradox in the story: what is the original crime? How could she have killed herself originally if she wasn’t there to kill herself?

Anyway, Sakon does heal all manner of people, using a tail feather from the phoenix, as well as demons and other monstrous looking creatures that come for aid, but there is one scene where she apparently refuses to heal someone: a loud-mouthed samurai warrior who bears some resemblance to her father. Is it her father as a younger man or just a stand-in representing her father? Perhaps this one refused warrior is her sin, she is still trying to kill her father (indirectly, by refusing healing). This is the only case I see where Sakon is explicitly shown refusing to help someone. We even see scenes of her getting over her fear and disgust with the monsters to help them.

Despite this, the punishment of the phoenix still seems absurd for someone who only kills themselves and wants their father to die. So many other worse characters have passed through the series without facing such endless punishment. The endless time cycle of the punishment does act in concert with the cycle of reincarnation and the circular nature of the series as a whole, another form of endless death and rebirth. 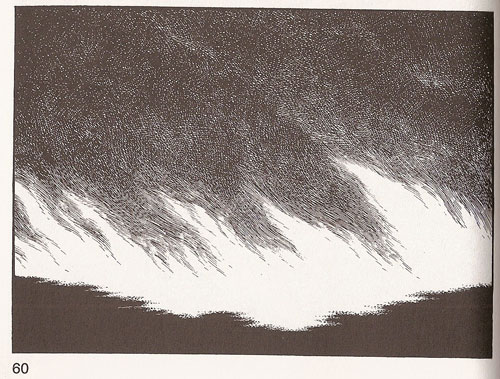 Just another one of those abstract landscapes I love, a fire on the horizon. 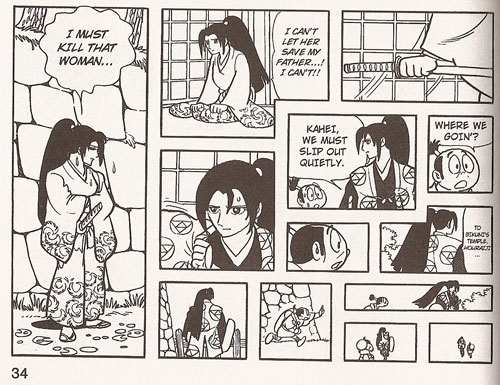 This is half of a page showing a rare use of very small panels by Tezuka. It’s almost a consistent pattern of shrinking panels except for the one panel that is made to stand out in the center. This sequence is the end of a flashback, so the shrinking panels are the past fading back into the past before opening up again into the present. 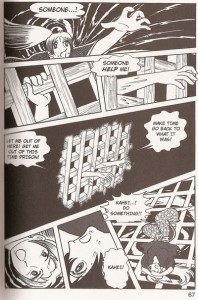 Tezuka’s less than subtle nightmare for Sakon. Despite its blatant imagery, it is effective and a bit creepy mostly for the way Sakon is faceless in the middle three panels. The bottom row of panels also rotate her head continuously to create a vertiginous effect that brings her back to waking (on the next page).

Next up: The last Phoenix story “Sun” which takes up volumes 10 and 11.