Besides my ongoing reading/blogging on Tezuka’s Phoenix, I’ve also been making my way through two other “classic” manga series: Koike and Kojima’s Lone Wolf and Cub and Otomo’s Akira. These three works are very different creatures on many levels, but primarily for me in my changing and opposite reactions to re/reading them.

I recently finished volume 10 (out of 28) of Lone Wolf and Cub. Having only read brief portions of this series before (some of the old First Comics serialization, one random volume of the Dark Horse edition), I wasn’t convinced of its quality. Mike Wenthe’s month long series of posts convinced me otherwise, and I’m discovering this series is much improved by continued reading. This is not to say the series (so far as I’ve read) is strongly continuity driven. In fact, there is little continuity through the first few volumes, and only in volumes 9 and 10 is the larger narrative becoming a more prominent part of the stories. Rather, in reading the series, I’m seeing how much Koike is slowly unrolling his characters and the world they inhabit, through a seemingly endless series of variations on a fairly simple plot: Ogami Itto (Lone Wolf) is hired to assassinate someone; he succeeds.[1] Almost every story follows this plot, yet Koike is consistently finding variations and subtleties to show more of Itto’s character (and that of his son, Daigoro) and to offer another historical lesson on Japan of the times (17th century). I’m taking the history as history in this series, as I understand much research went into the background if not necessarily the primary plot.

Kojima’s art is hatched, scratchy, and highly expressive, aptly displaying grit and dynamic action. Lines are everywhere: wind, water, motion, creating a world that is constant flowing, yet allowing for the removal of those lines to create a contrasting stillness and silence. As I read, I’m constantly impressed with Kojima’s skill, from detailed figure groups to panels that are complete abstractions, yet without losing a consistency of style.

He makes use of the two page spread like very few do. The only other example I can think of where the two page spread is so frequently used is J.H. Williams’ work in Promethea. Kojima’s use of extremely wide panels forces my reading to slow. It’s too easy to read a spread in the wrong order, partially because the dimensions of the volumes themselves make it hard to open the book sufficiently to easily see the gutters in the spine. Here’s an example from volume 10 made worse by the difficulty in scanning the volume: 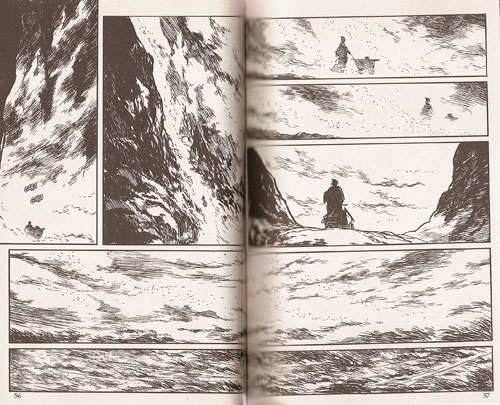 I would also note the two wide panels are so abstracted as to almost appear as just patterned marks. I can read them as wind/sky/clouds and wind/grass, respectively, based on context and the direction of the lines. 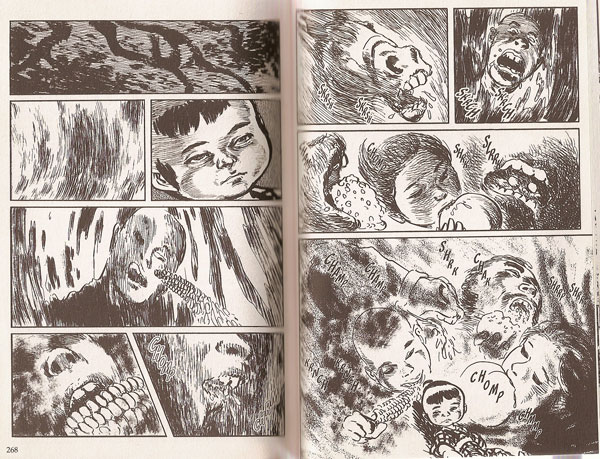 This sequence is unusual for the series in being almost hallucinatory. Daigoro lies underneath a tree, starving and weak, while around him travelers stop to rest and eat, mostly paying the boy no mind. Here we see a distorted symphony of eating, with heads and mouths chomping into various foodstuffs. Out of another set of abtract panels, the figures come as nightmarish creatures, especially the horse that jumps into the sequence on the second page. The man following the horse looks less like someone eating than a man suffering in some kind of hell. The montage panel brings a number of the figures together, in preparation for the final panel which surrounds Daigoro with the eating, as if they mock his hunger. Daigoro himself is the only thing in the spread that is rendered in the “normal” style of the rest of the narrative, further emphasizing the nightmarish quality of the others.

I just thought I’d throw in this panel, because I love the background. I have no idea what it is supposed to represent.

In contrast, I find I have little to say on Akira. Akira was one of the first manga I read, back when manga was rare and you could pretty much read every series in English. I still have my colorized translation that was serialized by Marvel’s Epic line in the early 90s. I haven’t reread it in many years, perhaps not since the series finished up in 1995. It’s always held a certain respect in my mind from that youthful reading, so I finally decided to pull out the old issues and read through them. Perhaps not surprisingly, in rereading the series, I find it much less impressive. I guess it’s a solid action manga, filled with dynamic scenes, but those action scenes – chases, battles, mass destruction – go on for so long as to drown out any other elements. The characters are mostly there to shout and run and shoot things, and even two of the protagonists’ teenage romance is given little time to make any sense (or really go anywhere). The psychic power element of the story is inconsistently used. The climactic scene is fairly absurd if you spend any time thinking about it (I’m still not clear on the character Akira and his place in everything), and the ending as a whole doesn’t really fit as a result of what came before it. This isn’t to say it’s a bad series, just that it’s succeeding on a very basic level of action/suspense (I kept reading to see what would happen next) and visual dynamics (no one does massive buildings collapsing and exploding like Otomo (and his many assistants, one assumes)).

I won’t be rereading it again, and I hope my planned rereading of Miyazaki’s Nausicaa (another manga series I’ve held onto for many years) is less a disappointment.

As an addendum, I thought I’d share this Alex Toth image from the last issue of Akira, which featured some tribute comics and drawings. The stark contrast of the image and the mostly abstract forms lead one to think Toth didn’t know all that much about the series. 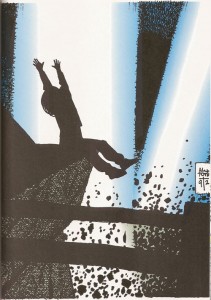 (Edit: A strange coincidence that the day this post went up was also the third anniversary of Toth’s death.)

[1] I should note as I get into volume 11, there are stories that do not follow this plot. In volume 10 Itto and Daigoro are separated from each other, so we get a number of stories with Daigoro wandering about by himself.