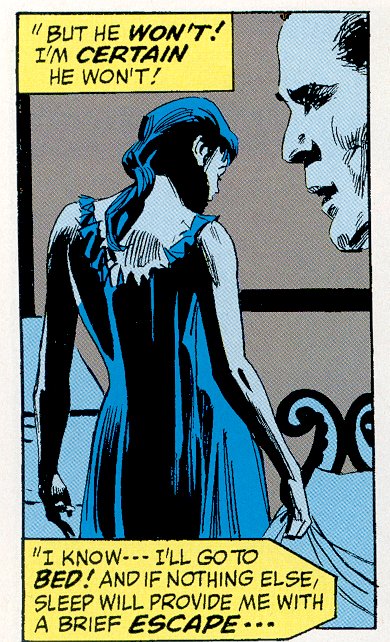 I love this panel by Gene Colan and Dick Giordano from “As Time Goes By” (My Love #16 (1972) reprinted in Marvel Romance (2006), written by Gary Friedrich). Blue monochrome always works for me, but it’s aided by the angular realism of Colan and Giordano’s use of both heavy blacks and thin hatching (look at that hair!). The woman’s pose turns her away from us which emphasized her emotional distance (she’s in love with the deceased Humphrey Bogart). The background is extremely abstracted, such as the few lines at the bottom right that represent a grasped bedsheet, and the two thick black lines across the middle and far left serve to box in the woman’s head and that of Bogart floating in her thoughts (separating them from the bed, interestingly enough). We also see the annoying Marvel style of excessive use of bolding words (as bad as Kirby’s silly use of words in quotes all the time).