Best known for the pioneering Little Nemo in Slumberland strip, Winsor McCay was a prolific artist of both comic strips and illustrations. Daydreams and Nightmares collects a large sampling of his non-Nemo work. While there is little here to expand one’s appreciation of McCay’s innovation with the formal elements of comics, there is plenty of room for marveling at his drawing skills and prodigious imagination.

The book starts off with a few introductory texts: a brief overview by Richard Marschall and two pieces by McCay, one on his animation work and a letter to a woman about becoming a cartoonist. He begins with “The greatest contributing factor to my success was an absolute craving to draw pictures all the time,” and ends with “Work! WORK! That’s all there is to cartooning.” Not bad advice, though a little bit of studying helps too.

The first chapter focuses on magazine work from 1898-1903. Amongst a few political illustrations, there are rudimentary comics, sequential illustrations really, that tell brief vignettes in six or eight images. Even this early, McCay’s drawing skill is impressive with his precise line work and realistic representations. A very strange series of images in this section are titled “If [a famous historical figure] Should Come Back to Earth.” The subjects, from Shakespeare appearing at a theatrical syndicate to Eve at a bargain sale, are often oblique, perhaps losing something in the century since they appeared (why does William Penn appear at a boxing match?). The style of this series is also extremely unusual for McCay. They appear to be painted in color and reproduced in black and white, ending up rather grey and muddy. The linework is obscured and the painting is not a decent replacement.

The second chapter features a few “Newspaper Fantasy Illustrations” from 1903-1912. These images present scenes of the future. The most impressive features a flying ship passing a open-air city with greek colums separating tree-filled levels.

The following three chapters hold a sixty page selection of McCay’s various comic strips, including Pilgrim’s Progress, Little Sammy Sneeze, Dream of the Rarebit Fiend, and various dream strips. Pilgrim’s Progress has a high contrast graphic quality to it (the protagonist wears a black suit and tall black hat) that is well complemented by its sparse compositions. The stories are odd; I’m not sure how to qualify that. They are neither comedy nor dramatic, and not enough samples are provided to get a real handle on the strip.

The Little Sammy Sneeze strips are so dully repetitive I can barely read more than a couple. Across six panels little Sammy completes one sneeze (basically an “ah… ah… ah… choooo”) that knocks about everything in the scene. Simultaneous to the sneeze we see some action slowly progressing in the background that is then disrupted by the sneeze.

The numerous dream strips will seem familiar to readers of Little Nemo. Each strip has a sequence of unusual events ending with a panel of the protagonist waking up. In these cases there is no continuity of story or character; they are a series through thematic unity more than anything else. Like in Little Nemo, the predominant element of most of the sequences is the slow transformation of an object, person, or background: a painter’s sits at an easel and the landscape in front of him changes with each panel; the tires on a man’s car slowly grow until, dwarfing the car itself, they explode; the pattern of a woman’s dress changes with each panel. One stand out strip has a man tossing down a cigarette and lighting the panel on fire. It slowly burns up the background until even the man is left as a pile of ashes and smoke. 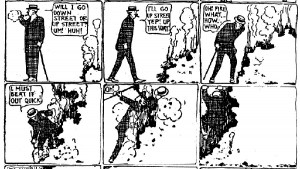 A few panels showing a man burning up the panel he is within. 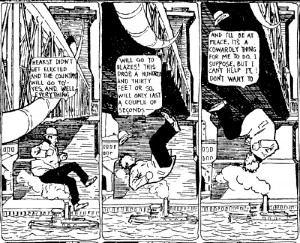 A few panels from a Rarebit Fiend strip.

That is not to say McCay doesn’t tell other types of dream sequences. the Dream of the Rarebit Fiend series is less about visual transformation than mining the everyday subconscious. If Nemo’s dreams seem rather undreamlike and too fantastical (in an adventure way), the Rarebit Fiend dreams feel like real dreams, with all the attendant real life undertones. In one strip, a man attempts suicide by jumping off a bridge, only to bounce off the water and get nabbed by a cop back at the bridge. Many feature a man or woman’s fears about their partner.

In every case McCay maintains a tight control over the panel transitions, allowing only very short amounts of time to pass from one to the next. Unlike the Nemo strips, he rarely varies his layouts, thought we do find the rare but expected stretching of panels to accommodate a transformation inside the borders (a giant sunflower that grows leads to tall panels, a bed that stretches leads to wide panels).

The largest detriment to all these strips is the unnecessary amount of cramped word balloons. McCay seems afraid to let a panel go by without some character adding a running commentary of extraneous description or babble. The cramped and distorted shape of the word balloons lead one to think McCay downplayed them visually, yet he uses so many in the panels.

The final section of the book is entitled “Sermons on Paper,” covering the latter part of McCay’s newspaper career, featuring illustrations of political and social commentary that were done to accompany editorials at the newspaper. These illustrations are the most impressive part of the book, particularly in how they contrast with the comic strips. I would like to see the text that accompanied these images because they feature such an unusual range of themes from fairly conventional political satire to post-apocalyptic cityscapes, futuristic visions, moral lessons, and religious imagery (some also of the apocalyptic bent). In one evocative image, hoards of ghostly white figures (all light hatching, no outline) attempt to escape a dark pool by climbing up the walls of a dark rocky cliff. Above them leers the massive horned visage of a devilish creature, looking much like an Asian demon mask, bearing a whip. The word “DOPE” hovers in the middle of the scene, picked out by a less dense hatching than the surrounding cliffs. The artwork is dark and moody, transcending the cliched theme. I’m tempted to go on describing the images in this section, as each page brings a new thrill, but let me just recommend you find a copy for yourself. 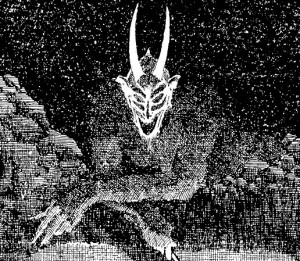 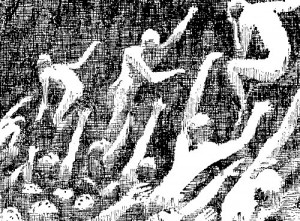 Two samples from the “DOPE” illustration (I just couldn’t do it justice at any small size).

His drawing in these illustrations is luscious and dense, filled with varying tonalities of cross hatching and the occasional screen tone. You have to really love drawing to do work like this. The time consuming nature of all that hatching precludes any other option, and in loving the act of drawing, McCay has created a most impressive body of work.For those interested in McCay’s work, this collection is an excellent supplement to a book of Little Nemo strips. The large size and fair-to-high quality of the reproductions allow the reader to get a close look at an artist who helped create comics as we know them now. My biggest issue with the book is its lack of information about the included illustrations and comics. Nothing is dated, noted where it was published, or given any context. But it is a small quibble.