Lewis Trondheim is one of the stars of French comics, recently given the Grand Prize at the Angouleme festival, one of the publishers at L’Association, and an extremely prolific writer/cartoonist. He started off in 1990 with a small book called “Psychoanalyse”, that features a crudely draw creature in two or three panels which are photocopied repeatedly over the course of many pages with only the word balloons altered. After this constrained, barely drawn book, Trondheim had the desire to draw something large. That he felt he couldn’t draw didn’t stop him, so he started this book, Lapinot et Les Carottes de Patagonie, with a thick pen line and a bunch of crudely drawn characters, some recognizably anthropomorphic animals, others unrecognizable as much of anything. 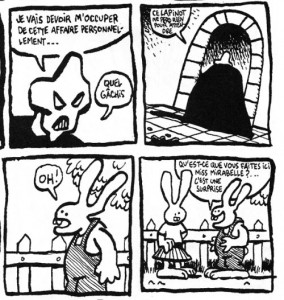 A panel from page 1, click the image to see a larger part of the page.

Trondheim made the story up as he went along, filling twelve square panels for 500 pages, over the course of which he learned to draw (or at least reaches a point where his style is approximatively that of his more recent works). He did not use pencils, just straight to ink. 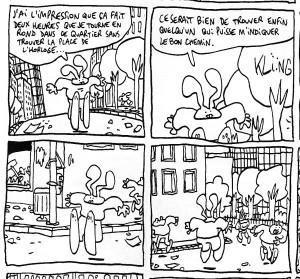 A panel from page 498, click to see a larger part of the page.

The book is a fun mess. Plotlines are introduced at every turn, as are characters. The setting is never really detailed, but it grows over the course of the book, not always in a way that makes sense. There are cars and guns and subways, but there doesn’t seem to be phones or television. The whole thing takes a kind of epic quest narrative with the reluctant non-hero, the rabbit Lapinot, who is here much different than his later incarnation in the series Les Formidables Aventures de Lapinot. He seems a little dull witted and spends the whole story focused on trying to get to the ambassador of Patagonia’s where he hopes to get a Patagonian carrot which will supposedly allow him to fly. This goal is constantly sidetracked by adventure and the others’ trying to get him to help save the world.

The book ends without resolving the world saving epic, but does finally put Lapinot face-to-face with the Patagonian embassy. It feels abrupt. The more prominent plot has been building to a climax that it never reaches, but for the protagonist, he has reached his goal. It makes you re-evaluate what the main story was.

One must admire the relentless forward movement of the story, tiny panel after tiny panel. Trondheim does not use shading, have much control of his line quality, or use many spot blacks. The art is minimal and simple, which often renders panels almost incomprehensible when there is too much going on.

Most interesting are the semi-abstract dream sequences into which Lapinot falls. They allow Trondheim to let his drawing run even more free, and he ends up with panels that are better composed and more dynamic. 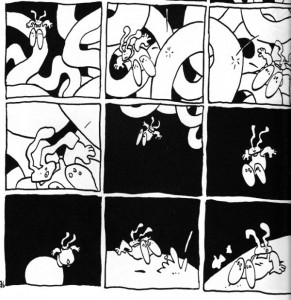 A panel from page 276, click the image to see a larger part of the page.

It was fun to read (and I always need more practice with my French) but it certainly can’t compare to the Lapinot series or his autobiographical works. Hardcore fans only.

I’ve been reading a lot of Trondheim’s work in the past two weeks, rereading old favorites and catching up with new ones. I’ll be discussing as many of them as I can in the upcoming days (time permitting). His work covers a rather wide range, from the completely abstract to the narrative, from the fantastical to the (relatively) realist. This early ambitious is a harbinger of great things to come.