King-Cat Classix from 2007, the first big collection of King-Cat comics from Drawn & Quarterly, was often a tiring read. John Porcellino’s beautiful minimalism and poetic comics did not appear fully formed. It was only towards the end of that volume that the Porcellino I know from more recent issue began to show through. The Classix was given the hardcover treatment by D&Q, and I’m disappointed they didn’t do the same for this much better volume. Either way, Map of My Heart is the place for the King-Cat ignorant to really get a feel for the strength and beauty of Porcellino’s particular brand of comics.

The volume collects most of King-Cat issues 51-61, covering 1996-2002. My first Porcellino comics, Highwater Books’ A Perfect Example (more recent edition from D&Q), comes from the early part of this period (the stories from that volume are excluded from this collection). Coincidentally enough, the first issue of King-Cat I have is 62. Reading this volume after reading the recent works and the early works made it feel like gaps were being filled in for me in the life of Porcellino. For example, his interest in Zen seems to take hold in these stories.

I’ve read and reread this volume, I’m not sure I have much to add to the many posts I’ve already written about King-Cat, but I thought I’d focus on one story in particular: “Psalm”, an 11 page story from issue 57 (1999, page 135 in this volume).

Underneath the title on the first page are the instructions: “(Please read slowly)”. I find it too easy to breeze through comics particularly when the art is so minimal, so I appreciate the reminder to slow down and linger over the pages. With only a few small bits of narration or dialogue, this story is easy to plow through too quickly. The narrative itself is Porcellino going for a walk one night. Nothing really happens. He walks, he listens to insects and to a light snow (I think it’s snow) falling on electric wires, he peers in the window of his house to watch his cat. The title holds a religious denotation, and, here, like in many of his works, the religious/the mystical are wrapped up in nature, life, and simple pleasures: “the first warm night of spring”, the clicking of insects, a picturesque view of the town with the moon over it, home, a loved cat. This story could be a litmus test to see if someone will appreciate King-Cat. 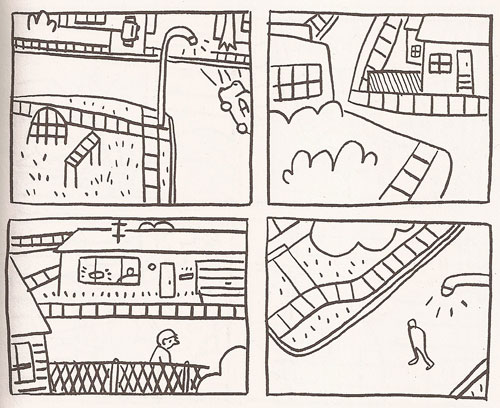 As John (the character) walks around town, we see images of him walking. We see images of what he sees (he admires a try, he admires a nice view, etc.). We also see images of streets and buildings that seem outside of any possible visual point of view. The perspective in many of these panels is wonderfully odd. Houses seen from the side are bordered by sidewalks seen from above but drawn with a semblance of traditional perspective (see above). One panel shows John and a tree from the side, while the grass and sidewalk are shown from above, as if they were a backdrop behind the tree. If you think about it in terms of traditional perspective it is all wrong, yet outside of those strictures, it works.

In some way, these views outside of the expected are a form of estrangement, making something strange so we must look at it anew. Towards the end of the story when John looks in the window of his own house at his cat sleeping on a chair, he is, in some way, estranging his own view of “home”, seeing it from a new perspective. This is further enhanced by the way he’s joined two panels together (see above), each showing a different image of Maisie (the cat) sleeping, yet connected together (note the lack of gutter). Are these two panels at all? Or are we simultaneously seeing John’s view and a second view of our (the reader’s) very own. The scalloped shape that bridges the two/one images is both bush (alongside the house) and thought balloon.

A slow reading of this story forces estrangement onto the reader as he pays attention to these simple things. Makes me want to take a walk on a warm spring night, sadly, as I write this, the first snow of the season is falling outside.

[This is part 5 of a 30 part series where I am writing daily reviews for the month of December.]