I’ve read a bunch of lamentations for the almost lost form of the single artist indie comic pamphlet. When I started reading comics in the early 90s my local shop had a surprisingly large section of indie comics of all sort. Slowly they have been dwindling out with the rise of the “graphic novel” and the economic bust in the comics direct market. I really don’t share the nostalgic mourning for the format. When my only options were indie pamphlets or superhero pamphlets, yeah, those indie ones were great. But now there are more graphic novels, reprint collections, translations (bd or manga), and webcomics than I could ever buy/read. Waiting months to get the next 20 pages in some serialized story just doesn’t have the same draw. The last few pamphlets I regularly bought are petering out. I’m assuming Palookaville is dead, Strangehaven seems to be gone (or on long term hiatus), Love & Rockets switched format, Age of Bronze was just too hard to follow in small chunks (and not worth it when I know they will get collected)… The lack of success of the Cold Heat serialization is a good example of the issues (haha). I think Berlin is left to (very) slowly parse out its last third, and of course, Dave Sim is still trucking along with Glamourpuss.

Most of what would have been comics pamphlet seems to have moved to the web or to minicomics focused on the art/book object itself. Yet, some pamphlets still appear outside of the so-called mainstream. Take, for example, Michael Deforge’s Lose #1, a 24 page black and white pamphlet with glossy paper and a color cover that came out this summer. One of the pleasures of the indie pamphlet often recalled by commentators are the parts that occur outside of a main serialization: the Gospel adaptations in Chester Brown’s comics, for example, or the many previews of other indie comics printed in the back of Cerebus. Deforge seems to be following a tradition in offering what appears to be a part of a serial along with a number of shorter pieces.

The short pieces are clearly intended to be comedic in nature. The book opens with a page of six single panel comics entitled “Dogs in College.” Not particularly funny at all. A few other pages in the book are devoted to parodies of superheroes, focusing, for some reason, on Green Lantern (“Young Green Lantern”). Can someone declare a ban on superhero parodies? Aren’t they self-parodying enough?

Thankfully, the majority of the issue is taken up by an unnamed longer story. A “guardian elf” named Nesbit Lemon talks back to God after being sent on too many “wrong number” calls and is banished to “the Lower Planes.” The Lower Planes turn out to be inhabited by cartoon characters, giving Deforge an opportunity to draw plenty of famous characters, most of whom are found in a bar situated on the top of a giant Nancy head. His skillful pastiche of the characters visually is unfortunately not matched by any real use of the characters as anything more than cameos. One exception is a scene with Bullwinkle the Moose, who explains the bar tv to Nesbit. It shows each character a loop of his fondest memories, slowing fading, and distancing the character from those moments. It’s a nicely done scene, evoking actual emotion, and is highlighted by the lack of Rockie the Squirrel being there alongside Bullwinkle in the bar. 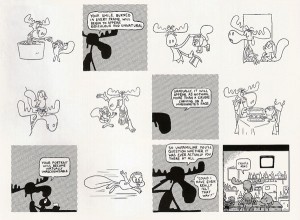 There’s a simplicity to Deforge’s drawing style that couples well with his use of black and a grey screen tone. The protagonist Nesbit looks like a head of garlic or a spade (from cards) with lines for arms and legs, simple enough that he “reads” at any size. The pages all start from a 24 square panel grid, which allows Deforge to use repetition and a fast rhythm to his small panels, while also giving room to make larger panels by combining the gridded squares.

At this point there’s not much to say about the story, as it feels so incomplete, which is part of the problem with this type of serialization. Would I buy a second issue? I’m not sure, as I really have no idea where he’s going with it and if it’s something I’d want to read. Will there even be a second issue? Deforge never finished the serial webcomic that was going up at TopShelf2.0 that I was enjoying quite a bit (I wrote about it for ComixTalk awhile back).

Thinking about it more, I’m not even sure if the story is “to be continued” or not. It doesn’t explicitly say it is, but it doesn’t feel complete…

[This is part 4 of a 30 part series where I am writing daily reviews for the month of December.]