This massive autobiographical manga has been appearing on a lot of the early best of 2009 lists, and while I can, to a point see, why, I’m not in agreement. A Drifting Life is, basically, the story of Tatsumi’s early entry into the world of manga and the history of the gekiga movement. Part autobiography, part history, it straddles both without really succeeding as either.

For the autobiographical aspect, Tatsumi keeps a distance from himself. He even changes his own name in the book. I never got the feeling I was learning much about the character at all beyond his passion for manga. It felt both too personal and too distant, as if Tatsumi were so close to the story, he neglected to fill in information the reader would want/need, but at the same time, like he doesn’t want to expose too much of himself, so he sticks exclusively to the subject of manga. He jumps from event to event, anecdote to anecdote, without really drawing out any of them, as if he had too much to say for the space/time allowed. What is this had been a long running serial, with time allowed to let the reader understand what went on, how Tatsumi felt, how the the other characters felt (who the others characters were, as most of them are interchangeable)?

Tatsumi’s distance from the characters is echoed by the visual distance he takes from them in composing his panels. In comparison to much other manga, Tatsumi avoids close-ups. He consistently shows the characters at an almost identical size on the page. I found all of Tatsumi’s manga rather than unattractive and lackluster. It doesn’t draw me in; it doesn’t make me take notice.

As a history of gekiga, a genre of manga created by Tatsumi and others, I felt like I was missing too much context to really get it. Without a knowledge of the manga at the time of Tatsumi’s youth and a clear idea of what his (and his compatriots’) manga was like, their so engulfing struggle to make manga that was different feels lost to me. Tatsumi inserts small panels or cropped pages from various works, but they are never enough to really establish an understanding. The endnotes in the translation don’t help either, as they are almost exclusively there to translate Japanese text in the panels. Historical notes are absent, but would be much appreciated. I’ve had this issue with previous D&Q manga releases (like Red Colored Elegy), where more notes and introductory materials would help fit the work into some context. I would have loved to see Tatsumi insert more full page reproductions of some of the work into the story, so as to better give the reader the feeling of reading the manga that is so vital to his narrative. He does this at one point with a panels from the story “Black Blizzard” (a book from the 50s that D&Q will be publishing in the Spring), and in an early scene he inserts half a page of one of his other stories. These particular scenes are some of the most effective in the book for understanding the manga and the character’s discussions of it. While, at other times, their discussions seem so abstracted.

One aspect I really liked, was the way Tatsumi drew more general Japanese/world history into the comic. Many of the chapters include a few panels of photo-referenced images about historical events of the time. At first these historical panels seem divorced from the rest of the narrative, as if Tatsumi just added them in to mark time, yet as one reaches the end of the book, this sense of disconnection becomes itself part of the narrative. The Tatsumi character finds himself in the middle of a demonstration against the recently signed security treaty between the US and Japan (from mid-1960), and he realizes that while he drifted in his tiny world of manga, Japan as a whole was drifting through a turbulent time. He was disconnected from those historical events, a feeling which Tatsumi’s use of the photo-referenced panels aptly conveyed both through their different style and their almost discordant insertion into the narrative.

Something that jumped out at me, is this brief sequence about some of Tatsumi’s experimentations: 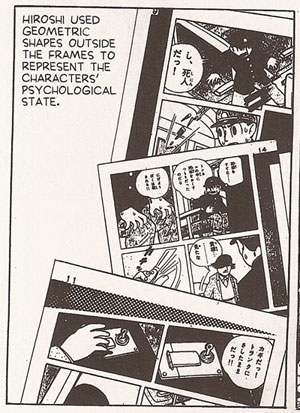 I’d love to see that story.

I have to wonder if part of the draw here for critics is that it’s a comic about comics. There is something special about this type of self-historical work in the medium it references. Similarly to Hicksville, A Drifting Life portrays a kind of heroic devotion to comics, that must be more satisfying to someone engrossed in the world of comics than to an outsider.

[This is part 7 of a 30 part series where I am writing daily reviews for the month of December.]