Alan Moore is indubitably one of the greatest figures in contemporary comics. He’s produced a large number of major works in conjunction with a prestigious group of artists. Most of these works are superhero comics, albeit unusual ones, from the groundbreaking Watchmen to the pulp pre-superheroes of The League of Extraordinary Gentleman. In the early 90’s he launched America’s Best Comics, a group of superhero series: Tom Strong, Top Ten, the aforementioned League, and Promethea. I’ve sampled all the series and found most of them rather uninteresting genre works, all except Promethea. Promethea is unlike the rest and probably unlike any other superhero comic out there. More than just a superhero comic, Promethea is a melding of that genre with the bildungsroman and the treatise. The story not only tells of a normal person taking on the mantle of a superhero, but also outlines her education and development while at the same time explicating Moore’s magical/mystical/spiritual/religious views.

The story’s protagonist is Sophie Bangs, a young college student in a futuristic 1999 New York City. In the process of researching a term paper on the character Promethea–who appeared (in Moore’s fictional world) in various artistic works from an eighteenth century epic poem through a early twentieth century comic strip, pulp fantasy stories, and comic books–she actually becomes the character. She learns from previous incarnations of Promethea about the history of her as well as the plane of imagination called the Immateria, a kind of imaginary plane adjacent to the material, “real” world.

As Sophie becomes more accustomed to the character she begins learning about magic. The longest storyline in the comic deals with her journey along the rungs of the kabbalah from the material world to the godhead (issues 13-23). This sequence is the most visually inventive and information rich part of the story where Moore leads us through many of his views about spirituality.

On her return from the godhead, Sophie is involved in a number of superheroic fights and battles, but eventually brings in the apocalypse, though not in a physical ending of the world, rather a perspectival change in the way people see the world. The final issue is an extended (and formally complicated) meditation on many of the books themes.

Such is the broad overview of the series. The story starts out very much like a normal superhero comic: an unsuspecting young pontential hero, a mystical heritage, a passing of the mantle, arch-enemies, fights, secret identities. Somewhere along the line the reader realizes Moore has more in mind than a simple superhero story (or even the rather literate ones he is known for). Perhaps it’s issue ten’s issue long sex scene that’s all about magic and symbolism and not erotics. More definitely (after a rather traditional issue eleven superhero battle) issue twelve’s primer on magic organized around Crowley’s tarot deck (one card per page) as symbols of the evolution of the world/man written in rhyming couplets–which also features an issue long joke across the bottom of the pages and 32 scrabble tile anagrams of “Promethea”–is a clear indication of Moore’s real aims for the series. Most of the conventional superhero Moore fans were probably lost with the eleven issue journey into the kabbalistic pathway to god. 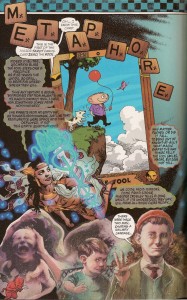 It’s a dangerous game of bait and switch that Moore plays in this series, and unfortunately it might be the series’ biggest failing. While the early superheroics fit in with the overall story, once Promethea has travelled into other planes and Moore has regaled us with his views, the superheroics that follow-up her journey and intertwine with the apocalypse at the end seem a needless gesture towards the story’s beginning. The late appearance and prominence of Moore’s character Tom Strong (who has his own series) serves no real purpose but to prolong the series.

I find the bildungsroman/treatise aspect of the series the most interesting in content and writing as well as imagery and use of the form. The superheroics are not only typical but, by the end, lose any sense of importance once one realizes the real point of Moore’s endeavor. That said, while Moore’s treatise on his beliefs is fascinating, I can’t say it has convinced me to become a believer. The vast web of metaphors, stories, symbols, believes, figures, ideas, religions, myths, etc. that he builds provides the real protagonist of the story. This dazzling display is not unlike a maximalist novel mixed into a Joseph Campbell book. (Oddly, though not unexpectedly, at a funeral I just attended, a psalm was recited that included references to rods and cups, which metaphorically fit in with what I had read in this comic.)

Early on Sophie is explicitly marked as a cypher for the reader. She is not only the protagonist but the one who learns along with the reader what Moore is trying to teach us. She has little personality of her own, acting as the agent of investigation that drives the story along without ever revealing much depth to her character. This is not a bad thing, it is essential for the treatise that the reader can see him/herself through the eyes of Sophie.

That all this is engaging across the many pages of the series is in no small way due to J.H. Williams’ brilliant art. The amazing stylistic diversity of his art is put to use in creating distinct visual differences between the numerous mystical states in the book as distinct from the “real” world. This varies from a conventional comic style to a realistic style to the integration of photos which creates a more real than real style, as well as collage and multi-media use.

A particularly unique aspect of the work is the way Williams uses the two page spread as the basis for his layouts instead of the normal use of a single page. This allows not only a larger palette for use but offers a variety of ways that he can organize the narrative images: symmetrical layouts, multiple narrative threads, panels that are read across both pages rather than one, symmetry, and more. Williams frequently use decorative borders and framing devices that integrate with the current setting, theme, or plot line. (Unfortunately the combination of page size and scanner size prevent me from sharing any examples of these spreads.) 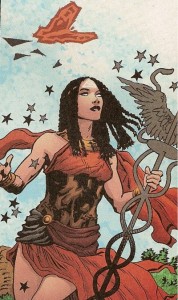 Woodcut style and the “normal” style.

During Sophie’s trip through the spiritual realms to the godhead, the diversity is most obvious. Each part of her journey has its own style (in one case a woodcut style, in another an impressionistic painterly style). I found this quote from Moore (in Eddie Campbell’s defunct Egomania #2), concerning the color schemes:

“And speaking for me and Jim and Mick and Jeromy and Todd, I think we’re all rather smug about how well the piece had turned out artistically. The strict kaballistic colour schemes, as an example, while they looked very dubious and unworkable on paper, have turned up some beautiful and often startling effects in practice. Issue 23, the issue dedicated to Kether, the godhead of the kaballistic system, had a magical palette of four colours, these colours being “White”, “Brilliant White”, “White-flecked-with-gold”, and most unhelpful of all, “Brilliance”. Despite how hopeless this sounded, we decided to stick to our guns and attempt the issue using only white and gold, and apparently the first few coloured pages do indeed look celestially beautiful.”

If I understand this correctly each spot on the journey had its own mystical color scheme which constrained the color use in that section. If you flip through those issues with this in mind it becomes a little more obvious that there are dominant colors in each issue. 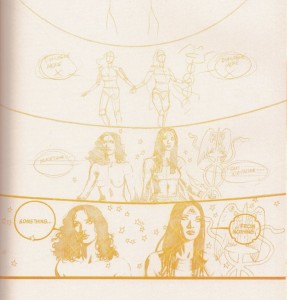 The first page of the issue Moore refers to in the quote.

This kind of formal play and visual adventure should be of interest even to those who don’t care for Moore’s treatise (“Moore’s Treatise” should be the subtitle to Promethea).

Promethea harkens back to previous centuries and various religious instruction books disguised as stoies laced with metaphors. The first one that comes to mind is The Golden Ass of Apuleius or even something like the books of the Bible. Moore uses the idiom of his time (one of them at least) to present his ideas in a more palatable format. How palatable it is depends on the reader. If you go into Promethea looking for a superhero comic like the ones you are used to, you will be disappointed. On the other hand, if you can let go of expectations and go along with Moore for the ride, it can be very enjoyable and engaging.

In the end, what is Moore’s point. What is it he is trying to teach us? If it could be summarized that easily, he wouldn’t have need a whole comic series to say it. I can’t even begin to explain it, though on many levels it feels like an amalgamation of all previous systems of belief wrapped in a meta-commentary on the act of storytelling (and mythmaking) and imagination itself.

Rereading is required and there is always more to discover. (You can find some annotations (and lots of page images) here (I can’t vouch for the accuracy of these as I haven’t read them).)