I so wanted to read more from Tom Gauld–and his work is so limited–that I bought this French edition of a year-long weekly serial he did for The Londonian. No surprises here for those who have read Guardians of the Kingdom or his Three Very Small Comics, but even so, a worthy addition to the oeuvre.

The book tells the story of two men who travel from their rural home to the city where they plan to start a new life. It’s never completely clear what they are leaving behind or why. The story focuses on their journey: they talk and joke, they camp out for the night and worry about wild animals, they reach a road and find themselves unsure of which direction to take, they dream and eat and sleep, and they imagine what the city will be like. The whole story is done in Gauld’s minimalist style and droll humor.

As this was a serialization, each page is episodic in nature, though also part of the continuing story. Gauld’s tendency towards slowness comes out here with episodes wherein almost nothing happens (the men go up a hill, the men think talk about food). The slow pace of the episodes adds to the identification with the characters’ journey by foot, their boredom, and their curiosity at what to expect when they arrive at the city.

Gauld does a great job in varying the episodes with different formal methods. Sometimes there are many panels; sometimes only one. At times the whole episode is in the thoughts of one of the men; other times it is all in the dialogue between them. Many of the episodes are inventive in their layout, composition, or breakdowns: varying panel sizes and organization, inset panels, different perspectives and angles, sound effects, diagrams, and more.

One episode is a single panel which is almost complete hatched into darkness. The reader’s eye follows a series of word balloons, showing the back and forth between the two men in the dark as one tries to return to their campsite after seeking out firewood. The balloons lead us through the dark hatching to the the bottom right corner of the page where we see the men together, one holding up a recently lit lamp.

Gauld cleverly denotes panels that take place within the thoughts of the characters by using rounded edge panels instead of sharp edged ones. It’s a simple effect but clear in meaning. For example: 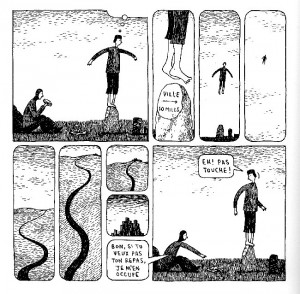 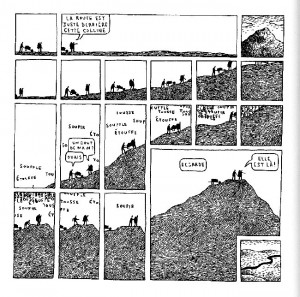 The next episode shows them talking on the top of the hill. The six panels on this episode are borderless, floating in white space with the hill below the character’s feet fading out beneath them. The whole page has the effect of looking like they are high on a mountain above the clouds which obscure the landscape below them.

These are just a few examples of the many interesting ways Gauld puts the page to use to make a rather banal story visual and formally inventive.

Late in the book, when the characters finally see the city, Gauld introduces yellow into an otherwise black and white book. While the book begins a single black square evoking the night, or the dark house where the characters begin, or perhaps the lack of hope they feel in their rural life. The book ends with the characters entering a door in the wall of the city, a yellow light emanating from it, someone (the characters? someone from the city? it is unclear) saying: “Oh, hello.” The next and final episode is a plain yellow square. The light of the city or the light of hope.

(As far as I know there is no English collection of this strip.)