I was up in the stacks looking for books on sumi-e, when I discovered Haiku and Haiga: Moments in Word and Image (Hotei, 2006; ISBN: 9789074822862). I wasn’t familiar with the term haiga. Turns out it is a haikai poem accompanied by an image. In this catalog of haiga, the works are usually haiku accompanied by ink paintings. The calligraphy of the poem and the brush strokes of the image are composed in complement to each other, though not (always) in direct illustration of each other. The imagery is often abstract or at least stylized in a rather cartoony way.

While I wouldn’t say these are comics, they do have certain comic-esque (bédésque?) qualities. The word-image interaction is more involved than a simple illustrative redundancy, and, in general, the poems and images are created by the same author. They are clearly meant to be “read” rather than just viewed: look at the image, read the text, look at the image (or perhaps text-image-text). The style of most of the works in this catalog also have the simplified, and direct communicative, approach common to most comics.

Some of the images are beautifully abstract, imagery that is only anchored by the poem. I wanted to share a few examples that I really like (poem translations by Daniel McKee):

[Click on each image to get a larger view.]

First snow of the season —
until it grows familiar with it
the bamboo does not lie down
(Poem: Yokoi Yayu, Image: Naito Toho)

It’s wonderful the way the white snow is created by surrounding it with a light wash.

I love the dynamic and variable strokes in this one. 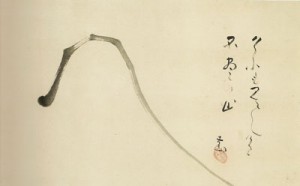 Need I say anything about this one?

Ran fell, mixed with snow
and now in the clearing sky —
the winter moon

Into the pine mountain
it seeps, quaking
the winter’s moonlight night
(Inoue Shiro)

The image of the pines nicely rhymes with the calligraphy.

This one is just beautiful, I’m sure the scan doesn’t do the subtle color washes justice. Completely abstract yet so evocative of a “spring thaw.” 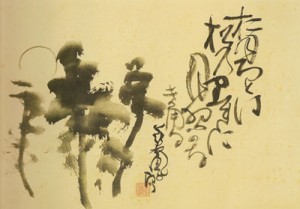 I love the way the calligraphy and the pine trees are drawn with a similar wide and loose stroke.