During a panel at the American Library Association conference this summer about wordless books/comics, Charles Hatfield mentioned the term anchoring in relation to text/image interaction. I questioned him about it later and he sent me to Barthes’ Image, Music, Text (Hill & Wang, 1977), a collection of essays translated by Stephen Heath, where is found an essay called “Rhetoric of the Image.” In the process of analyzing an advertisement, Barthes posits two “functions of the linguistic message with regard to the iconic message”: anchorage (ancrage) and relay (relais). Noting how polysemous images can be:

A the level of the literal message, the text replies – in a more of less direct, more or less partial manner – to the question: what is it? The text helps to identify purely and simply the elements of the scene and the scene itself; it is a matter of denoted description of the image (a description which is often incomplete)… The denominative function correspond exactly to an anchorage of all the possible (denoted) meanings of the object by recourse to a nomenclature. Shown a plateful of something, I may hesitate in identifying the forms and masses; the caption (‘rice and tuna fish with mushrooms’) helps me to choose the correct level of perception, permits me to focus not simple my gaze but my understanding. When it comes to the ‘symbolic message’, the linguistic message no longer guides identification but interpretation, constituting a kind of vice which holds the connoted meanings from proliferating, whether towards excessively individual regions or towards dysphoric values… the text directs the reader through the signifieds of the image, causing him to avoid some and receive others; by means of an often subtle dispatching, it remote-controls him towards a meaning chosen in advance. (39-40)

His examples of a plateful of something brought to mind this panel from Hope Laron’s Gray Horses: 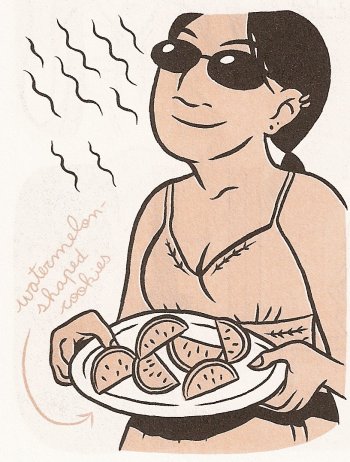 which performs this type of anchoring function. Without the text, we might think it a plate of orange slices or some other fruit. This is a non-subtle example, but the first example that came to mind. I suspect we could find many more less obvious examples if we paged through a few comics. Austin Kleon has a few examples of anchoring in a post about words and pictures. Barthes explicitly mentions ideological uses of anchoring, an example of which tops Austin’s post.

Barthes’ second function is relay which he explicitly connects to “cartoons and comics strips”:

Here text (most often a snatch of dialogue) and image stand in a complementary relationship; the words, in the same way as the images, are fragments of a more general syntagm and the unity of the message is realized at a higher level, that of the story, the anecdote, the diegesis. (41)

This should sound familiar to comics reader, Barthes relay is that oft-described complementarity between text and image which is almost a defining aspect of comics (and is defining for Harvey and his visual-verbal blend). Barthes spends little time investigating the relay, though perhaps other theorists in semiotics have (something to look up). Certainly comics theorists have spent time addressing this issue (Harvey, McCloud, and others).

Barthes use of the term ‘relay’ for this function is apt. A relay is a hand-off or a transferral from one thing to another. In this sense the meaning of the whole is handed-off from text to image or image to text. We cannot process both text and image simultaneously, we look at the picture then we read the text, or we read the text then look at the picture. The meaning, the story, the sum is created through that movement. Most of McCloud’s word-image combination types are just a continuum of where the locus of meaning is from the text through to the word by way of a combination of the both. (It occurs to me, thinking about his categories in this way, that the “parallel” combination is very similar to the “interdependent” combination. I’d assume that any successful use of the parallel use of text and image creates meaning through the interaction of the two which would not be possible if either were excised.)

Of course not all comics make use of this function. It’s not hard to find comics with redundant text or pointless images. Though, as I discussed in this post, we do need to read the comics for more subtle effects of the interaction, such as those created by layout, composition, or breakdowns.