If your experience is anything like mine (previous to reading these books that is), the name Flash Gordon conjures up Freddie Mercury singing about how Flash will “save everyone of us” in the 1980 movie that for a certain time seemed to be in endless syndication on Saturday afternoon television. Or maybe you’ve seen some of the old movie serials of Flash Gordon. 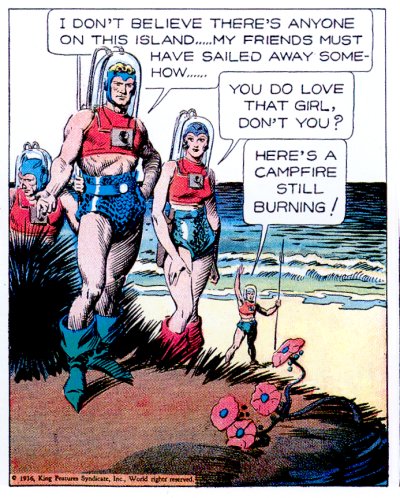 Flash stands with Queen Undina in their airbreathing apparti on the beach.

What I’ve only more recently learned is that Flash Gordon started in January of 1934 as a Sunday comic strip drawn by relative newcomer Alex Raymond. It was created as a competition for the then popular Buck Rogers strip (another that is now more known for its screen adaptations). Raymond’s artwork starts out unremarkably but as time passed he become one of the most well-regarded of comics artists. His artwork makes Flash Gordon more than just another rather silly science fiction strip (albeit one of the originals in the genre).

The set-up of the story in the first couple strips is quite a mess. A comet/world is going to crash into the Earth. Scientist Dr. Zharkov works feverishly to save the Earth. Flash Gordon (Yale graduate and champion polo player) and Dale Arden (”passenger” is all we learn of her) are in an airplane crash. Flash saves Dale and they run into Zharkov at his secret lab. For unclear reasons he thinks they are spies and forces them into his rocket which he is going to use to crash into the comet and save the Earth. They crash on the planet, Mongo, and adventures ensue… and after reading three volumes (four and a half years of Sunday strips) I still don’t know if Mongo crashed into the Earth (and none of the characters have brought it up). Maybe they get back to it later.

Anyway, Flash, Dale, and Zharkov face a never-ending trial from the monsters and men of Mongo, mostly from the Emperor Ming the Merciless (whose whole Empire seems to represent some kind of “yellow menace”, down to the yellow/green hue of their skin). Everywhere they go on the planet there is a new type of “man”–the hawkmen, the cavemen, the underwatermen–or monster–invariable a slightly altered variation of some earth creature like a tiger with a horn (”tigron”)– that threatens or befriends them, not to mention the various queens, witches, and plain women who fall in love with Flash, much to the anger and jealousy of Dale. With the amount of forests, swamps, and caves that Flash’s adventures take him to, this is as much Tarzan or Conan as what one comes to expect from science fiction adventure (Flash uses swords and clubs as much if not more than he uses ray guns).

It’s all quite ridiculous, really, in an old pulp sci-fi way but also entertaining and fun. I laughed at the absurdity of the characterization or lack thereof (characters fall in love or become the best of friends at the drop of a hat), but I still wanted to keep reading, to know what happened next, and to see more of Raymond’s art.

As the strip progresses Raymond’s art became more and more dynamic and realistic. His figure drawing is exquisite as is his attention to clothes (though showing skin through lack of clothing is almost as important considering the number of times Flash and his male comrades go shirtless). Just about any panel will show his skill with posing and placing figures. I don’t know anything about Raymond’s methods, but I wonder if there were models involved (or photographic reference).

Raymond uses a lot of parallel lines for shading, thin lines that move with the shape of the object. At times, particularly during the strips in Volume 2, the lines are so numerous as to create a feeling of almost constant movement. This is done to excellent effect in a sequence involving an undersea kingdom. The lines create the effect of swirling water, ever moving around the scene. 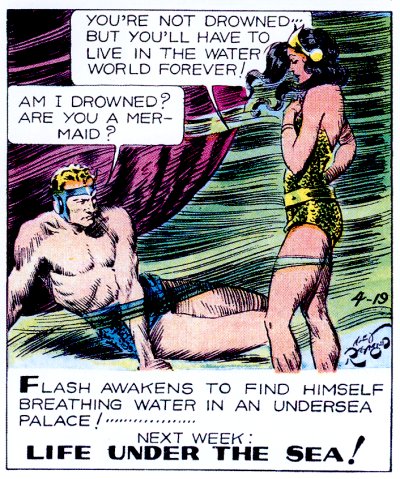 Flash awakes underwater with Queen Undina standing over him.

A strip from June 16, 1935 features a flight of hawkmen swooping down on a ground army. The lines and hatching are such that they remind me of an etching by Blake, perhaps of Lucifer and his angels falling from heaven (sorry, the image takes up almost the whole page and is too big for my scanner).

The environment in Flash Gordon is a surreal altered Earth landscape. The forest kingdom is filled with giant trees, in which buildings can sit, and mad “squirlons” that attack like vampire bats and look like flying squirrels. Buildings, objects, and vehicles are all streamlined, curved versions of Raymond’s late-thirties era. The inhabitants of Mongo zoom around in phallic shaped rockets that look like wingless airplanes. It is the classic look of science fiction, familiar to many, and Raymond brings it to glorious life.

The whole strip uses both narration and word balloons. The narration is used to bridge the gaps between the panels, as the Sunday strip style is generally more compressed than most comics, even more than daily strips, which work with smaller units of time. Unlike another illustrative strip of the same period, Prince Valiant (which I’ve discussed at my blog), Flash Gordon makes use of word balloons for character’s speech. The use of dialogue slows down the movement of the strip; time does not always pass at a quick pace, but when it does the narration provides what the pictures cannot.

Checker has published these volumes in rather large-sized hardcovers (unlike their microscopic reprints of Milton Caniff’s Steve Canyon) on glossy paper. The biggest disappointment is the quality of reproduction. For an artist of Raymond’s stature and skill, one can only wish for the best of reproductions, but sadly, these are occasionally muddy and often off register. It’s hard to fault Checker as the work involved in finding originals or cleaning up the art would be extensive and costly. Still, having seen some of Raymond’s art in black and white, I almost wish for a black and white reproduction to better show off his art. His careful use of spot blacks (often eschewing them altogether) means his uncolored ink work sits rather lightly on the page, but without the color one can clearly see the line work and how subtly it creates shape and depth (see this example).

Each of these volumes covers more than a year of Sunday strips (each successive volume has been about a month longer than the previous) collectively spanning January 1934 to June 1938. Two more volumes are expected from the publisher, according to their website, and one hopes they will release more volumes to finish out Raymond’s run on the strip, which lasted through 1944 when he entered the military. I’d personally recommend Volumes 2 or 3 (or look for Volume 4, which I believe is due out this month). Skip Volume 1 unless you really want to follow the story from the beginning because the art in that book is sub-par.

If you want to sample some of the artwork, I’d suggest this Spanish site which has panel reproductions from each of the years of Raymond’s tenure (scroll down and click on the links for different years).