I remember reading Prince Valiant in the Sunday comics section when I was younger. I found it completely strange that the comic had such realistic drawings and all the text was written out at the bottom of the pictures rather than in word balloons. I never managed to actually follow the strip, and thus always found it a little confusing–I had missed years of back-story. I picked up this volume from Fanatagraphics’ now complete reprinting of Hal Foster’s run on the strip from its beginning in 1937 to his retirement in 1980 (though he stopped drawing in 1971). I picked a random volume that wasn’t too early (so he had time to mature) and not too late (in case his skills waned)… so, Volume 11 covering the full-page Sunday strips from Dec 9, 1945 to October 22, 1946, almost a year of strips.

The story follows Prince Valiant (Val) from Saramond where his recently found love of his life Aleta, a princess, has been held prisoner. He lays siege to the city, takes it over, rescues Aleta, visits Rome, gets married, and returns to his home in Camelot where trouble with forest bandits and invading Saxons ensues. Val’s world exists somewhere between the real historical world, a realistic King Arthur and Camelot world, and a fantastical one. In this particular story there is no overt fantasy (magic, monsters, etc) though I understand there is some in earlier adventures (and which Foster eventually did away with completely).

Hal Foster is generally credited with bringing the realistic illustrative style to the comics pages, influencing such comics greats as Alex Raymond of Flash Gordon fame (on which more in a later post). His drawings are beautiful, realistic, and quite detailed (he did his research). He is at home drawing anything from a city to a forest, from women gossiping to men fighting. When he needs to he fills a panel with a wealth of detail, thick forests, crowds of people, but he doesn’t overburden the page, allowing a solitary figure or a head shot to stand on its own when that is what the story requires. The scene is always set, but often a simple flat color will do for a background when our focus is elsewhere. This volume features a number of pages with striking English forests in autumn. The color reproduction is bright and luscious. If there is one fault with the artwork, it is its static feel. Foster rarely engenders a sense of movement. (Also, he tends to draw close-ups of Val with bright red lips that make him look inane.)

Here are two panels as example artwork. The first is a scene in the forests of England. Note the beautiful coloring of oranges in the tree at the left, the depth of the forest behind the characters (nice reds at top center), the wonderful mirroring in the water with its attendant blues and greens, and the expressive postures of the characters even at such a small scale (though the image is smaller than actual size). 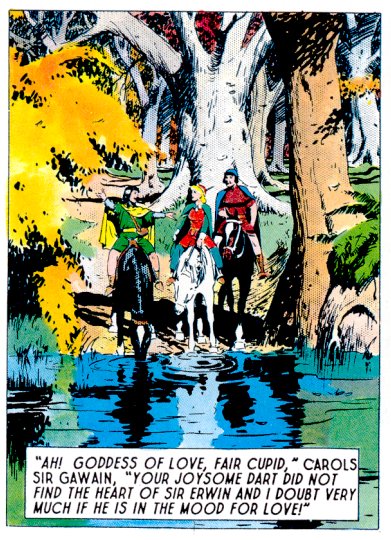 Gawain, Val, and Aleta ride by horseback through the forest, approaching a stream; the leaves are turning for autumn.

The second panel, which is one of the last in this volume is a much simpler arrangement, focusing on the two foreground characters. The line work that makes up the dark area above the snow is hard to make-out at this scale, but it is an interesting grouping of parallel lines arranged geometrically. The darkened faces of the characters (Val and Aleta) and the snow against the darkness really set the mood and scene, while the text below it fills in the details, letting us into the characters subjective space. 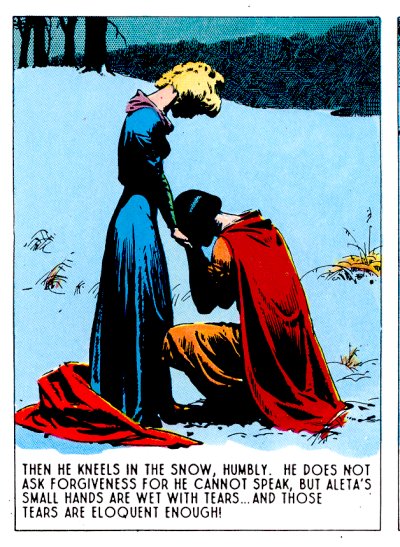 Val kneels before Aleta on the snow-covered ground.

This is an epic story of knights and adventure, romance and war, and Foster’s art and writing are evocative of that mood. He focuses on bigger movements, longer periods of time. Instead of word balloons, thought balloons, and narration a narration beneath each panel suffices. The panels are almost exclusively of the scene-to-scene or action-to-action type. In comparison to the slow decompressed style of a manga, Foster’s story blazes along at a gallop (ultra-compressed). The narration serves to fill in the gaps where the pictures do not speak. While occasionally what we read is redundant with the image (I don’t believe a single panel is without its narrative block, even if it be only a sentence), it is less-so than in many recent comics I’ve seen. The narration allows Foster to make greater leaps from panel to panel than most comics use, but he does slow down the story when needed. An important fight or exchange will come across in a few action transitions, though never spread out so much as to take the whole page.

As is traditional in comic strips, the page layouts are structured into strips of equal height. In this case each page is done from a traditional nine panel grid (3 strips of 3 panels), which Foster modifies only slightly (a panel that is of double width) giving every page from 6-9 panels. I see only one place in the whole volume where a panel is of a larger height: the image of Val and Aleta being married is expanded to take up a square that would normally encompass four panels.

This is not a style of comic seen much now, it is more a cousin to illustrated books or children’s book (in form, I mean) than most contemporary comics. This was the form originally used by Foster for Tarzan and later taken up by Alex Raymond on Flash Gordon (though Raymond used word balloons rather frequently). I really like the large single page installments. It has a nice rhythm: the story moves along by leaps and bounds, but the reader can linger on the artwork.

I wish I could follow the whole of Foster’s run, but the price would be exorbitant. I’ll pick them up if I find cheap copies here or there and enjoy the bits and pieces of the narrative I read. Foster is one of the masters of comics; treat yourself to at least one volume of this classic.

(It is interesting to note (to me at least) that originally Foster planned on calling his hero “Derek”.)