Though I went through art school for four years, I’ve always kept my comics separate from my “art,” (I mean this in the sense of the “fine arts” as in those works that fall into the conventionally considered “art world”) not in the sense of what I created (my artwork has almost always been narrative and often sequential) but in how I thought about influences and ways of looking. Lately, a few different encounters have got me thinking about art and comics and how the two intersect, mostly in the way of art influencing comics.

The first encounter was the Andrew Wyeth exhibit currently up at the Philadelphia Museum of Art. Wyeth’s paintings are quite narrative, though not in an explicit way. Of particular interest is the way he uses windows as framing devices to divide elements of his paintings. I am deeply impressed by the way he builds up marks (in this case egg tempera) to create very dense, color rich surfaces that are flat and abstract. In many of his landscapes one can almost view them as abstract paintings, carefully composed (Wyeth’s sense of composition is amazing).

After seeing this exhibit, we walked over to my favorite rooms in the museum: the Duchamp room (including his “Large Glass” and “Etant Donnés”) and a room containing Cy Twombly’s ten painting sequence “50 Days at Iliam.” Twombly’s ten large paintings retell, in his own way, part of the Iliad. His paintings use mostly oil crayon and pencil on a white ground. He writes on the canvases, often naming heroes or gods, and scribbles or outlines geometric shapes. This mix of words and abstract images to create a narrative in sequence attracts me to this room. (Unfortunately all the images at the museum site are tiny and one cannot make out any of the details, search the museum site for Twombly if you are really curious.) The Achaeans charging into battle are a grouping of scribbled names accompanying sharp triangles pointing forward. A painting of Achilles avenging Patroclus is mostly a massive blood red smeary scribble that perfectly sums up the fury and violence of the half-god. The paintings are all hung in the same room (except one which is just outside the doorway) taking up all the wall space, and they are hung in such a way that there are two parallel sequences on the left and right, one for the Achaeans, one for the Ilians. In the center is a large painting with three chaotic scibbled circular blobs representing Achilles, Patroclus, and Hector, the heart of the battles.

I cannot do these images justice (hopefully I can find some better reproductions to scan at a later date), but they are dynamic, striking, and very (though I’m not aware Twombly was consciously thinking in this direction) comics like. Between the integration of images and words, the narrative, and the juxtaposed sequential image aspect (particularly the clear organization to their location) all the aspects of McCloud’s or Eisner’s or Groensteen’s definition of comics are met. Instead of pages in a book, the images/paintings/panels are organized on walls in a room.

The abstraction of the images that still tell a clear narrative (in conjuction with the words) is something that is rarely seen in comics. Abstract comics are rare, even though abstraction in painting has been widely seen for at least as long as comic books have existed. (More on abstract comics next week.)

My third encounter was with Picasso’s etchings which illustrate scenes from Ovid’s Metamorphoses. In this case, last fall I found a book about them (after a long time of searching them out in various Picasso monographs) Myth and Metmorphosis: Picasso’s Classical Prints of the 1930s by Lisa Florman (MIT Press, 2000), an excellent work on the Ovid prints, the “Vollard Suite” of etchings, and “The Minotauromachy,” which I finally read last week.

In this case there are three points of particular interest to me in regards to comics. The first is my original attraction to the prints for their extremely simple and beautiful lines. The Metamorphoses etchings are an example of extreme representative minimalism. The line quality is almost unvarying as it outlines the forms of characters and basic objects or backgrounds. There is no extraneous information or shading, nor any color or tone. The compositions fill the page yet do not crowd it. With these minimal works it is easy to see the genius of Picasso.

One element of the etchings that Florman discusses is the frequent illusion of movement, achieved with a few tactics. In some cases Picasso shows us multiple views of parts of the figures. We see both front and back of a character creating a sense of motion. Notice the multiple view of Eurydice in this print as well as the multiple heads that create a sense of her falling to the ground. 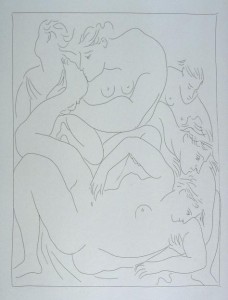 In other cases figures overlap and lines shift in appearance between one character and another to create a frenetic chaos (notice the chaotic intertwining of Tereus and Philomela below where some lines appear to be part of both characters). Both tactics insert an internal movement into the etchings. What might be achieved in a sequence of two images is pushed together into one, a visual elision. 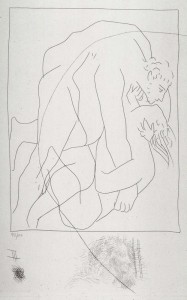 The third point of interest in this book came from a discussion of suites of prints and their unifying structure. Florman brings up Wittgenstein and his concept of “family resemblance”. The concept is about breaking away from an essentialist view of, in Wittgenstein’s case language, in Florman’s case art works, but in my case comics. Here are the relevant parts from the Philosophical Investigations:

66. Consider for example the proceedings that we call “games”. I mean board-games, card-games, ball-games, Olympic games, and so on. What is common to them all? — Don’t say: “There must be something common, or they would not be called ‘games’ “-but look and see whether there is anything common to all. — For if you look at them you will not see something that is common to all, but similarities, relationships, and a whole series of them at that. To repeat: don’t think, but look! —

Look for example at board-games, with their multifarious relationships. Now pass to card-games; here you find many correspondences with the first group, but many common features drop out, and others appear. When we pass next to ball-games, much that is common is retained, but much is lost.– Are they all ‘amusing’? Compare chess with noughts and crosses. Or is there always winning and losing, or competition between players? Think of patience. In ball games there is winning and losing; but when a child throws his ball at the wall and catches it again, this feature has disappeared. Look at the parts played by skill and luck; and at the difference between skill in chess and skill in tennis.

Think now of games like ring-a-ring-a-roses; here is the element of amusement, but how many other characteristic features have disappeared! sometimes similarities of detail. And we can go through the many, many other groups of games in the same way; can see how similarities crop up and disappear. And the result of this examination is: we see a complicated network of similarities overlapping and cries-crossing: sometimes overall similarities.

67. I can think of no better expression to characterize these similarities than “family resemblances”; for the various resemblances between members of a family: build, features, colour of eyes, gait, temperament, etc. etc. overlap and cries-cross in the same way.-And I shall say: ‘games’ form a family.

In the Picasso book, Florman suggests substituting “art works” for games. It occurred to me to use “comics.” All those attempts to define comics and deciding whether silent strips fit the definition or single panel comics or text-heavy comics (like Sim’s “Reads”) come under a new light when we consider comics as a family, in Wittgenstein’s metaphorical sense. They don’t all share all the same characteristic (sequential, text/image interaction, etc) but they all share some of the same characteristics.

Something to think about. (Definitions are on my mind right now, for another project I’m working on.)

All this has got me thinking about looking more at fine art painting and drawing in relation to comics. Something we see directly in the works of Mark Staff Brandl, whose presentation discussing comics and fine arts, intersections and influences can be read/viewed here. Mark’s work work the vein of the gallery comic, using comics tropes and influnces to create installations and other gallery centered works. His view on the matter is worth reading at that link. More to come.