(Edit: A translation of this work was published in Mome volumes 6-8 (Fantagraphics) as “At Loose Ends.)

In my head I divide Lewis Trondheim’s work into three categories. First of all, the popular series which are more in line with traditional bande dessinee. Here we place the Lapinot series (my favorite, two of which were translated by Fantagraphics a few years ago) and the wildly popular Dungeon series (many volumes of which are available from NBM), among others. Second, we have the experimental work, like his early Psychoanalyze, or more recently Bleu and La Nouvelle Pornographie (the latter two are silent, so accessible to anyone). Last, we have the autobiographical works, such as the current strips on his blog (which, by the way, are very funny lately, dealing with his winning of the grand prize at Angouleme) or the Carnet series (some of his autobiographical strips were also printed in Fantagraphics now defunct Nimrod series).

Désoeuvré is autobiographical, but as a part of L’Association’s “Collection Eprouvette”–a new series of comics essays–, it is also an essay. The title can be translated as “idle” or “at loose ends” or “having nothing to do,” and as the book opens Trondheim tells us he hasn’t been working on drawing a comic for 80 days. In 14 years, it is the first time he’s stopped (which may account for his remarkable prolificacy). His reasons for taking a vacation from drawing are three-fold. The first two deal with work he’s been involved with in animation. The third reason is the most fundamental (”le plus fondamental”) and the focus of the essay: the problem of the cartoonist’s aging (”le problème du vieillissement de l’auteur de bande dessinée”).

He illustrates the essay by following his own travels over the course of a few months (June through September of 2004) including trips to Paris, the Netherlands, London, and Portugal for comics festivals or vacations. In this way we see the progress of his thoughts and the interactions he has talking with other cartoonists about aging and cartoonists.

Throughout, Trondheim struggles with the idea, not really of aging but of burning out on making comics, becoming repetitive and stale. For a cartoonist whose work spans such a range as Trondheim it is interesting to note his concern with this idea. This personal element is the real heart of the book. As much as he talks to others about the issue, it is really Trondheim’s fear of aging and becoming boring that drives the book.

The question of motivations for creating comics and how that might change and be affected with age is another prominent concern of Trondheim’s. He accepts the idea that he creates comics to spend time outside of reality, as the reader reads to be outside of reality. But he also creates because of a passion to create and as a way to make a living doing something he loves. As he says: “Passion. Profession. Drug. A very complex alchemy to master,” (”Passion. Mètier. Drogue. Alchimeie trés complexe à maitriser,”). This push and pull of passion and profession is central to many of the discussions in the book.

If you are familiar at all with the European comics scene, the names of other cartoonists that appear in the book will ring some bells: Moebius, Joann Sfar, David B, Christophe Blain, Guy Delisle, to name those available in English. Each weighs in on their opinion of the matter, often with a “don’t worry” kind of attitude (though only Moebius could really be considered old and, as Trondheim notes, he is constantly innovating). Trondheim talks to various critics and historians to find out about Belgian and American cartoonists and their aging. Though Trondheim sticks to his idea of cartoonists’ aging badly, the anecdotal evidence suggests that there is no particular lean towards negative aging, nor that cartoonists have any predilection to aging poorly moreso than any other type of person (in one scene Berberian (of Dupuy &…) jokes to Trondheim that he could start a whole series of “Aging Badly”: cartoonists, butchers, bakers, etc.). While we have examples like Jack Cole (suicide) or Hergé (depressive), there are counter-examples like Herriman or Schulz who retained a high quality to their ongoing strips.

Trondheim, here as in his other autobiographical works, illustrates himself as a hooked beak bird and other people as different sorts of animals. His drawings have a simple sketchy style that has an immediacy which fits with the journalistic nature of this essay. I find this style extremely attractive. It has the clear line realism of Hergé mixed with a lively comic strip abstraction.

The scenes in the book are not solely journalistic recountings of travels, events, and conversations. Trondheim also mixes in metaphorical/fantastical scenes or illustrations, such as a scene where his character Lapinot rises from the ground to complain about Trondheim having killed him off in the eighth volume of the Lapinot series (La vie comme elle vient, one of Trondheim’s best works). Trondheim replies that he wanted to avoid a stale progression of the series: “Lapinot’s going to have a child, Lapinot gets married, Lapinot becomes a grandfather, Lapinot has his prostrate operated on.” Later in the book, he brings up other cartoonists whose series go on too long, never really changing, never really getting bad, but never topping earlier work. This is particularly relevant to the European scene where single author album series are more prominent in the mainstream than the ever-shifting creators (but never-changing characters) of the American “mainstream.” 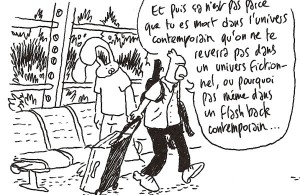 (Trondheim (right) talking with his fictional character Lapinot (left). Translation: “Just because you are dead in the contemporary world doesn’t mean you won’t be seen again in a fictonal world or even a flashback.”)

Another method Trondheim uses, and one of the more interesting visual aspects of this book, is to insert life drawing sketches into the book. In one sequence we see a page of sketches of different birds accompanying a completely unrelated narration. The last panel shows Trondheim standing amongst a bunch of tourists sketching a group of birds within a fenced-in area. He often includes realistic sketches of places, such as a few pages of buildings and vegetation drawn while he vacations in Portugal with the Sfar family. Later we find another page of bird sketches, this time with word balloons coming from them: “Drawing after nature seems inexhaustible. No writing. No thinking of your ego. Messing up a drawing is part of the risk,” (see the image below). In this context the life drawings found in the book fit with Trondheim’s concern. By drawing from life he does not have to concern himself with the story, he can just enjoy the act of drawing, something we see Sfar reminding him to retain. 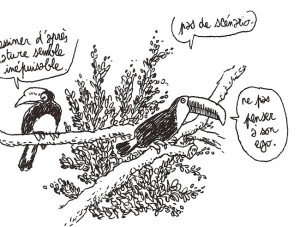 The sketchbook aspect of the book is increased by the lack of any panel borders, giving the pages an open, unstructured appearance. It seems to say, “this is an informal work,” and in the end that is what we have. Désoeuvré is much more autobiography than essay, but in both cases this is clearly a work written more for cartoonists than the general comics reading populace. While the problem of aging is universal, Trondheim’s particular concerns and discussions are deeply routed in the mètier of the cartoonist and even, in many cases, in the Franco-Belgian comics scene more so than the American scene. But, if you have are a cartoonist, Trondheim’s essay will be of interest. And if you aren’t, you can at least appreciate the art and the frequent humor (Trondheim’s works are rarely lacking in humor). Trondheim may be worried about getting tired and boring, but this work shows that he’s still as inventive and interesting as ever.

More about Trondheim’s works as the month progresses. I have a few of his books on the “to write about” pile.