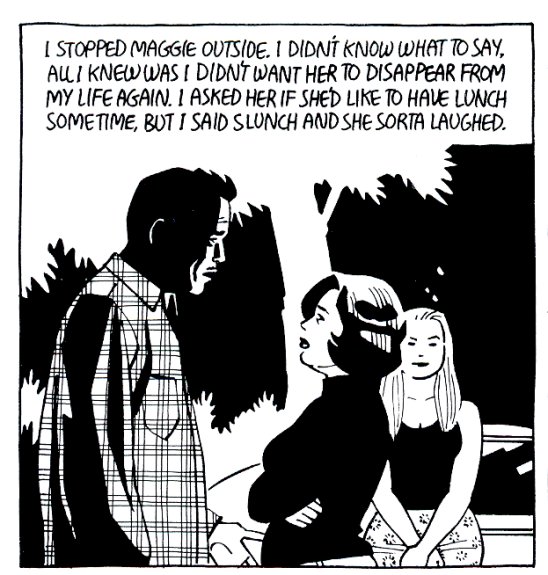 The Hooded Utilitarian is doing a “Best Comics” poll that includes essays on the top ten aggregate results. I wrote the essay for #7 The Locas Series by Jaime Hernandez, which went up today.

Here is the whole article, for posterity...

For better or worse, American comics has been an art dominated by its characters. Even the most uninterested of Americans if asked about comics would, no doubt, think of characters rather than artists or titles: Garfield, Superman, Spider-Man, etc. The tradition holds an equal stable of character pairs: Batman and Robin, Archie and Veronica, Charlie Brown and Snoopy. If the pair of Maggie Chascarrillo and Hopey Glass, the protagonists of Jaime Hernandez’s Locas, have not entered this popular pantheon, it is perhaps because of their shorter history or, due to their cursing and having actual sex (sometimes with each other), their lack of an “all ages” audience. Or maybe it’s because, unlike my other examples, Maggie and Hopey are dynamic individuals, rather than static icons.

Almost all of the Maggie and Hopey stories have originally appeared in Love and Rockets, the anthology series Hernandez produces with his brother Gilbert. Over a 30-year period, he has done something quite rare with his famous pair: he has built up their lives as a massive, unfolding narrative. Since their introduction in 1981, Maggie and Hopey have aged and their world has grown. Unlike most other comics, these stories exist in time—not just in the passing time of their reality-based world, but in the passing time of the characters themselves. Like Frank King’s Gasoline Alley (and few others), the characters age over the course of the series (although not quite in real time). Rather than maintaining the status quo in endless repetition, Hernandez makes change a defining element of the series’ trajectory.

First seen as a teenage punk, by the time of the most recent stories (last year’s Love and Rockets: New Stories v.3) Maggie, the character given the most attention, has passed her 40th birthday and her life has changed as much, if not more, as it’s stayed the same. In tracing the lives of his characters, Hernandez does not offer a simple chronology of events; his narrative style in many ways echoes the reality of making friends. We learn about Maggie like we learn about our friends: stories come out over time. We are there for some of the big moments but miss some of them, too. Years later we hear a childhood story or some small anecdote that fills in a missing piece, a missing clue to their actions and personality. Part of Locas’ power is this sense of Maggie, in particular, as a friend or acquaintance. We are not privy to all her thoughts and actions. We see her this week, but then lose touch for a few months, or even a few years of blank times and secrets. It is often as telling what Hernandez leaves out as what he puts in.

The stories Hernandez tells are grounded in a contemporary reality (one that, unlike most comics, acknowledges race, sexuality, and class) but are also willing to touch on a host of modes and genres. The early stories are a little too rooted in science fiction-esque adventure, and a recent story delved too long into nostalgic superhero tripe, but for the most part the shifts into the fantastic feel fully integrated with the real emotional drama (and comedy) of his characters, all of whom live and die, love and lose, work and play, and go about their lives in a way that has clearly provided decades of reading pleasure for more than just this fan.

Throughout the series, Maggie struggles with her sense of self-worth, her ever-changing relationships with family and friends, and more recently her aging and the passage of time (I think it no coincidence that recent stories delve back into her childhood and revisit a number of relationships from her past). With the accumulation of time (and pages), Hernandez is increasingly able to wring emotional weight from small moments and allusive reference in a way less expansive works cannot accomplish. The intertwining threads become more prominent with re-readings as brief mentions early in the series become full-grown stories years or decades later. Hernandez has created a sense of history (albeit fictional) in Locas that is unparalleled in any other comic.

A project like Hernandez’s gains effect from the way its physical manifestation exists in a time similar to the narrative. Rather than experiencing the characters’ lives in a single unified chunk that compresses and smooths over the changes of time (like a novel or film), Locas as a series of publications and Hernandez as an artist have both grown along with the narrative content. The youthful adventures of Maggie and Hopey are the youthful drawings and writings of Hernandez and the youthful expressions of the “alternative” comics scene. As Maggie ages, as Hernandez refines his work, so too have the publications grown along with the changing realities of the comics market to be one of the last serialized “alternative” comics from the era Hernandez (and his Love & Rockets co-creator/brother Gilbert) helped found.

All these narrative pleasures would be lost without Hernandez’s clean visuals, a stripped-down amalgamation of influences from the comics of his youth. Examples include the stark contrast and framing of Alex Toth and the stylized cartooning of Harry Lucey, Bob Bolling, and other Archie artists. His style is never ostentatious, and over the years his line has simplified, tones are rarely used, and only two stories have appeared in color. He is not afraid to make use of many of the tropes of comics for both comedic and serious purposes. Of particular note are the breadth of his character designs and the skill he shows in depicting his characters’ aging faces and bodies. His images not only clearly convey the story, they add to its impact.

For readers unfamiliar with the material, the earliest stories are not the best entry point (as is the case with many long-running series), so I’d recommend The Girl from H.O.P.P.E.R.S., the second volume of Fantagraphics’ most recent series of reprints. This volume includes the early masterpiece “The Death of Speedy,” which gives a better feel for Hernandez’s more mature stories.