If it’s not already obvious from the comics I’ve posted in the past month, I’ve been looking at (and reading about) a lot of Asian ink/brush art lately. In particular a lot of this art has been zen or poetry related. (Japanese film director Yasujiro Ozu was also a big influence on a few of those comics.)

Enso: Zen Circles of Enlightenment by Audrey Yoshiko Seo is a collection of 56 ink drawings of enso (circles). Seo provides translations of the text that accompanies the enso images and commentary on the works. I thought I’d share two of them. 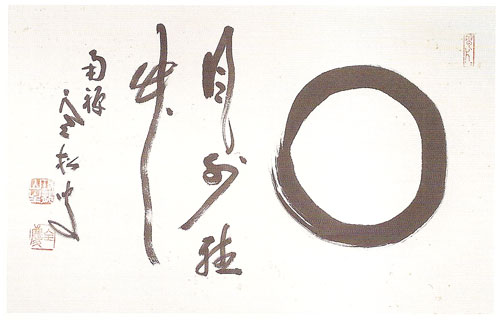 This one is by Shibayama Zenkei (1894-1974, none of the works are dated in the book so I’m just giving the creator’s dates). The text reads: “Beyond the wind, listen to the bamboo” and then the signature. Note the second line of text (remember going from right to left) is only one character stretched out. That is the character for “bamboo”, which Shibayama has transformed to look a bit like bamboo. 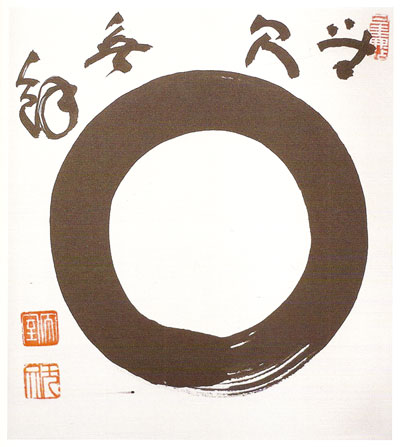 This one is by Yamada Mumon (1900-1988). The text reads: “Nothing lacking, nothing in excess.” The enso itself is wonderfully simple, yet subtly complex. There is just a slight irregularity in the upper area where the paper shows through, that nicely offsets the lower area where the brush stroke began and ended (most enso are done in one stroke). It is in pieces like this where I appreciate the concision of the Japanese language/characters. Being able to say whole words with a single square character really fits with the simplicity of the image.

I wrote about a book on Haiga back in the beginning of the year. Haiga are basically haiku paintings, poetry mixed with ink paintings. There doesn’t appear to be many books in English on the subject. One of them is Haiga: Takebe Socho and the Haiku-Painting Tradition by Stephen Addiss (University of Hawai’i Press, 1995). Between the two books I’ve read I’ve become enamored with the work of Inoue Shiro (1742-1812). I’ve not found any info about him nor any other images.

This one is called “Self-Portrait”, and the text reads:

No color or scent
when flower-viewing–
stuffy nose

The image is so completely abstract and dynamic with varieties of line and wash. 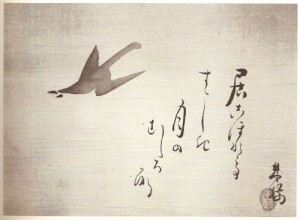 Less abstract and dynamic, but still a lovely simplicity:

Instead of home–
the cool moonlight’s
straw mat 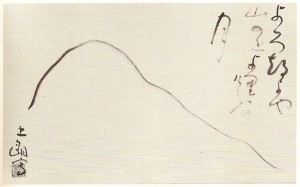 Perhaps my favorite one, very similar to the Mount Fuji haiga by Shiro in my other post (scroll down, you’ll see which one I mean).

Through the ages
rising above the mountains–
tonight’s moon

The character for “moon” is the last (ie on the left) character in the text of the poem, set off on its own line and slightly larger, placing it as both part of the poem and as representationally in its place above the mountain.

I’ve also quite enjoyed The Way of the Brush Painting Techniques of China and Japan by Fritz van Briessen, which focuses on a more refined version of ink painting, but it’s section of technique and the different methods used in traditional Chinese ink painting where really informative with some nice example images. That’s worth searching out if you are interested in the topic.