The Michener Art Museum in Doylestown, PA is currently (through January 30, 2011) showing “LitGraphic: The World of the Graphic Novel.” That’s right in my neighborhood (metaphorically speaking) and I rarely get to any gallery shows with comics in them, so I visited it this past weekend (actually back in October now, as I forgot to post this sooner!). A little internet searching shows this same exhibit was first shown at the Norman Rockwell Museum in 2007-2008, but after seeing the show it felt more like it came straight out of the 90s as a fumbling attempt at some kind of “comics aren’t just for kids”, “graphic novels are literary”, “hey adults, comic!” context.

The show was displayed in one large gallery with art on the four walls and a series of large dividers in the center holding more pieces. There were a few cases showing books. I’ll admit to not reading the introductory text written on the walls, I started the first caption and got annoyed by it very quickly. Who writes these things?

The show was organized by artist, with groupings of pages or books for each. The first artist in the entrance was Lynd Ward. The timing for having his work up is pretty perfect since that new Library of America set is just out. There were about 50 original prints from his book God’s Man. Wow. Having only seen his work in reproduction (well… re-reproduction, I guess) I never realized how small he worked. Each print/panel was maybe 4″ x 5″, certainly not bigger than that. The fine lines of his engraving is technically amazing, as are his stark and powerful compositions. Unfortunately the pieces were hung three rows high, making it very hard to get a good look at the prints in the top row. Nearby was one of Frans Masereel’s original woodcut books in a case. I wish I could have paged through it, but again I was impressed at the size. The originals are much smaller than any of the reproductions I’ve seen. 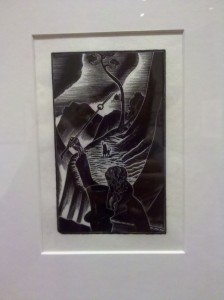 There were a few pages of Frank Miller drawn Captain America, which seemed pretty out of place in the show. Primarily because it was a superhero but also because it is extremely minor work by an artist that has done so much more (I didn’t look it up, but judging from the style this was about the time of (or probably pre-dated) his first run on Daredevil. You almost think these pages were here so they could put Miler’s name on the promotional materials…

A few large pages from Mark Kalesniko’s Mail Order Bride. I’ve never read the book and the pages here didn’t make me want to read more. Ok work, but nothing exciting. As original art it was interesting to see where he had pasted new board over top of some panels, editing or redrawing I guess.

The back wall of the exhibit was covered with perhaps a dozen (maybe less) pages from Sim and Gerhard’s Cerebus. A huge cover to the first Church & State collection, a number of pages from Jaka’s Story, and a couple pages from later books. Gerhard’s backgrounds are extremely impressive at this size, and I was interested to see how Sim had gridded out the guidelines for his lettering (horizontal and vertical lines, that’s not conventional I don’t think). I also noticed that the wavy panel borders used throughout Jaka’s Story were some kind of pasted on screentone-like substance. Looks like it was put on after the inking, which explains the perfect edge on those panels.

Further down one wall was a Spirit story by Will Eisner and a few pages from A Contract with Good. The Spirit pages were huge. One page by R Crumb was displayed with an oddly cut mat that covered up a word balloon in the top right panel. Some kind of censorship I assume. Why bother showing Crumb if you’re going to censor it?

There were a series of large multimedia images by Sue Coe from here book Pit’s Letter, that seemed to be about the life of a dog, including dog fighting and what looked be death at the pound. Powerful images with strong political content. It’s been a long time since I looked at Coe’s work, though I have her Dead Meat somewhere on my shelves.

Walls of pages by Terry Moore, Matt Madden, Jessica Abel, and Howard Cruse were not much more interesting than seeing the books in print. None of the original pages had much in the way of markings or media that would be lost in the printing. Pages from Harvey Kurtzman’s The Jungle Book were mostly of note because of how yellow and aged they looked. I mostly skipped past work by Marc Hempel, Brian Fies, and Peter Kuper. Lauren Weinstein’s pieces from Girl Stories were pretty amusing (I haven’t read the book), and there was a couple of her sketchbooks/journals in a case.

One of the highlights of the show (and not even mentioned on the promo materials I have) was work by Barron Storey. There were about four pages hanging on the wall and a bunch of his journals in a case. His work has always impressed me technically, and you get an even greater sense of it seeing the originals. He seems to make a lot of use of copying and collages, pasting reproductions onto a page and then drawing to integrate it with the rest of the image. I snapped a couple photos with my camera despite the “no photos” sign at the entrance (the guard disappeared for while). 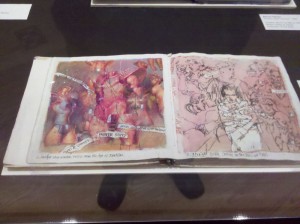 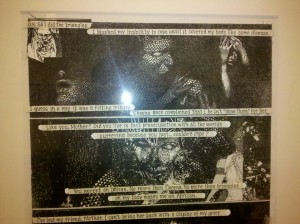 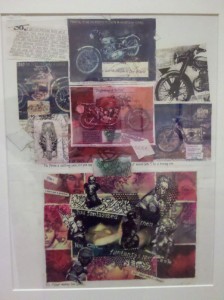 In the end the show was thematically incoherent. I have no idea what connected all the works except that they were comics (and some (not me) might argue that isn’t the case for the Ward and Coe pieces). They weren’t all what you might call literary comics. They weren’t exactly historically important works (some, yes, but not most). They weren’t of a time period or a genre or a style. There was no story to the exhibit and that really hurt it. It really felt like it was an exhibit of work whoever curated the show could get. They knew the artists or had friends with connections, so those are the pieces they showed.

With a few exceptions I wasn’t that impressed seeing the original art. It didn’t add to my understanding of the work or its context. This isn’t the case with all original comic art, as I was quite impressed by the Dan Nadel curated David Mazzuchelli show at MoCCA the other year. But LitGraphic just didn’t have the unity or the guiding curatorial hand at work to make it cohere and impress.