Corto Maltese is another famous European comics adventure, not as famous as Tintin or Asterix, but certainly a favorite of many. Italian artist Hugo Pratt created him in the late sixties and wrote and drew his stories (about 16 volumes as far as I can tell) through the late eighties (Pratt died in 1995). Pratt is highly regarded for his drawing style and his literate adventure tales.

The stories of his most famous character, Corto Maltese, have been translated into English in the past by NBM, but they are now out of print and often fetching absurd prices. I ended up getting a French translation of one of his books instead.

Corto is a rogue adventurer, a sailor of British and Gypsy descent. He is classic of the type where his morals are personal and based more on freedom than any laws. While selfishly inclined to seek out treasure and adventure he is also quick to come to the aid of those who are oppressed. The adventures I have read are often based on the pull of adventure and gain versus doing what he thinks is right, though inevitably he ends up helping some poor soul.

In Corto Maltese in Siberia, set in the late 1910’s, Corto travels from Hong Kong into China, Mongolia, and Siberia in search of gold, held by a Russian warleader on an armored train. The adventure comes by way of a Chinese secret society of women called the Red Lanterns. Pratt brings a lot of historical context into the story, in this case current relations amongst China, Mongolia, Russia, and the U.S. It is often difficult to entangle who’s fighting on which side, though this edition comes with a multipage forward detailing historical background and the real life figures Pratt used in the story. 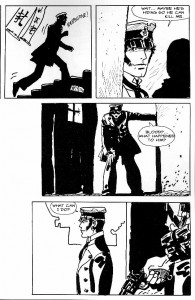 Pratt’s art is the real draw to his work here. His stark black and white ink work is done with a dynamic line and liberal use of black areas. It’s no surprise to learn that Frank Miller was quite influenced by Pratt, his Sin City style high contrast art is reminiscent of Pratt, though decidedly more stark in line use. Pratt himself is easily seen as influenced by Milton Caniff’s later work. If you look at the panels above from Pratt you can see his use of high contrast black to accompany very thin hatching (panel 2) and a wonderfully simple yet evocative outline (the skyline in panel 4). Compare this to Caniff’s Steve Canyon from the 50’s (scroll down for the images). 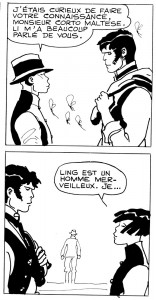 These two panels really show off his linework. Look at that great wobbly line in the first panel where Corto’s sleeve is rolled-up at the elbow, or the bare outline of the man walking away (he is the husband of the woman and thus between Corto and her). The flower blossoms we see in the air in the first panel, pepper the two or three pages of this particular scene, providing a nice sense of wind and movement. The lines are not precise, measured, or even very steady. They are beautiful and imprecise, expressionistic, which isn’t to say Pratt can’t also draw the most precise and detailed train one could wish for in other scenes (his trains and boats are impressive, clearly showing that he researched not only historically but also visually).

I mentioned Caniff above, and besides art style, there is a certain resemblence between Corto Maltese and Steve Canyon, one that perhaps also showcases an American/European difference or maybe just a difference in time (Canyon, a product of the post-war years, Corto a product of the late-sixties). Both men are adventurers, travelling the world, helping people and themselves. But while Canyon is a patriot, Corto is more anarchistic and independent.

I managed to find one of the English translations for a decent price, NBM’s Voodoo for the President, (Vol. 3 in their series of translations from 1986) which contains four shorter stories. In these we find Corto travelling by boat around South America and the Carribean. One of these stories showcases Pratt’s use of a fantastical and often surreal atmosphere in his stories: a former officer from France hallucinates besides a wilderness lake. Figures from his past life and events from the war are conjured up.

If you can find one of these translations I’d recommend picking it up and giving it a read. Treat yourself to one of the great comic artists.