I just got back from a walk to the post office down the street. As I walked, thinking about this book, I realized I hadn’t really looked at my new neighborhood (been here about a month now). I’ve walked the streets and been to different buildings, but I’ve not really looked around.The Walking Man is for the most part about walking and looking. The main character, who remains nameless throughout the 18 vignettes contained in the book, is a youngish married Japanese man who in the first story has just moved into a new house in a new town (subtly conveyed by a few boxes in the background and the way he is surprised to see a bird that a bird watcher tells him is the most common bird in the area). The man must have some kind of job–we see him dressed in his suit, carrying a briefcase, coming home–but there is never any indication of what he does. The book solely focuses on his walks, often beginning or ending at his house.

In one sense, “nothing” really happens in this book: he walks, he looks, he reads, he exchanges a few words, he takes a bath, it rains, he buys cake or a paper balloon, he walks his dog, he helps a group of boys retrieve their model airplane from a tree. On the other hand, the world happens in this book: plants, weather, animals, people. In an age where zooming from one place to another is de rigeur, the simple act of walking and looking becomes almost revolutionary. Taniguchi skillfully takes us along with the “walking man” and makes us look at his surroundings. Maybe next time we won’t have to be lead along.

The walking man is endlessly curious, observative, and kind. His dog uncovers a seashell in the backyard, and he no sooner goes to the library to look up the shell. He gets off a bus early after spotting a tree covered hill at the end of a small cross street, then climbs the hill to its top. He helps an old lady find her way and squeezes through the narrowest alley I’ve ever seen (he has to turn sideways). Throughout he is looking and smiling and appreciating the world. Very few words are exchanged in the book. Other than to his wife, he rarely says more than a word or two to people. When engaged in conversation he lets the other person do the talking. He listens.

The artwork is in a realist manga style. It is quite reminiscent of Katsuhiro Otomo’s art (perhaps Taniguchi was an influence or there is some other mutual influence in manga history). Backgrounds are quite detailed, while characters are slightly more cartoony with large chins and eyes somewhere between the “big eyed” manga style and the small eyed American style. 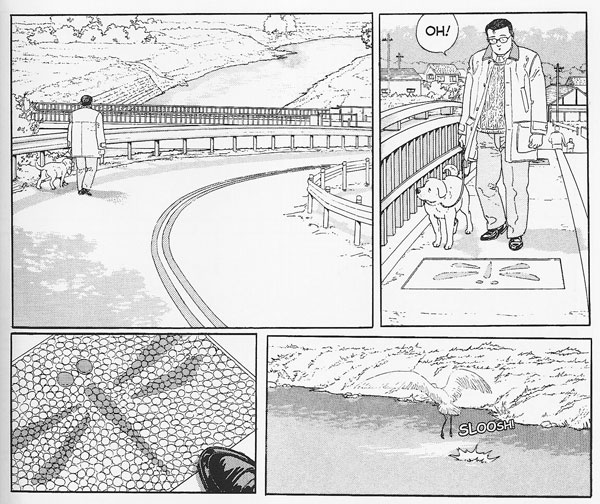 The realist backgrounds are a great strength in this book. While the story made me think a bit of John Porcellino’s comics, with the interest in looking, nature, and discovery, the backgrounds made a great difference. When Taniguchi shows his characters interested in something we see that something in amazing detail, in Porcellino’s case the art does not allow that sense of looking. On the other hand Porcellino’s work also uses more narration which conveys attitude, emotion, thoughts. Taniguchi makes us guess the walking man’s attitudes and thoughts and gives us only his wonder and curiosity with the world. It is much more about the gaze. Numerous scenes are set up with a panel of the man looking off into the distance and then a panel of the thing on which he has focused his attention. This is particularly prevalent in the earlier parts of the book, as if Taniguchi is teaching us to look with the character.

The pages are organized in what Benoit Peeters would call the rhetorical style: tall panels are used for trees, wide panels for scenic vistas, smaller wider panels for the man’s head looking off panel at something, single panel pages for slowed down moments that last forever (he takes a hot bath after being stuck in the cold rain in two single panel pages). The organization is mostly invisible because it is so integrated into the story.

Taniguchi is accomplished at composing his panels and pages. One brilliant example is a set of four panels on page 17 that are smoothly integrated with each other (see the accompanying image (only part of the page). In the first panel notice the curving road and guard rail along the bridge where the man and his dog are walking. The top end of the curve leads off the right side to the next panel where the line is continued by the guardrail at a different angle that curves into the walking man as he looks down at a mosiac in the street. The bottom curve of the road in the first panel leads down to the third panel in the group. The road line becomes the one end of the mosaic in close-up. This line of the road/edge of the mosaic moves into the fourth panel (to the right of the mosaic panel) and becomes the shoreline of the river below the bridge where we see a bird taking off. Words do not do the smooth layout justice.

This is an excellent book, one I will gladly place on my small manga shelf with the works of Osamu Tezuka (Phoenix, Buddha, Adolf), Miyazaki’s Nausicaa, and the similarly themed Yokohama Kaidashi Kikou. I’m looking forward to more works from Taniguchi (the publisher has already volume 1of his Time of Botchan collaboration, with vollume 2 on the way soon) and more translations from Fanfare/Ponent Mon.