[I have here collected the various posts and links related to the idea of what I call “pictureless” comics. They remain mostly unedited except in cases of redundancy.]

I read Dylan Horrocks’ “Inventing Comics: Scott McCloud’s Definition of Comics” (originally from The Comics Journal 234 (June 2001)) this morning. He takes Scott McCloud to task for his definition of “comics” in Understanding Comics. It’s not something I’ve spent too much time thinking about, as I’ve been more concerned with McCloud’s analysis of some of the workings of comics rather than the definition. Definitions of such broad areas always ends up being a big pain in the ass (try starting a conversation about defining “science fiction” sometime).

Horrocks argues with McCloud’s definition of comics as a form and his attempts to put up boundaries around what comics is. He pulls out implications of McCloud’s definition that are not immediately obvious and adds to his argument with quotes from a Comics Journal interview with McCloud. It seems that McCloud sees comics as being dominated by the images (“…If the pictures, independent of the words, are telling the whole story and the words are supplementing that, then that is comics.”). Earlier this idea is linked to film and sound (film is purer as just images, i.e. silent film). For some reason Godard’s films that have audio tracks incongruous to the video come to mind (a comics equivalent might be interesting (and Chris Ware has done it). I certainly can’t agree with the concept in regards to comics. (Is a song less a song if the words are more prominent than the music?)

A useful example in this matter is David Lasky’s comics adaption of Poe’s “The Raven” in the Orchid anthology (Sparkplug Comic Books, 2002) (6 pages are here to preview). In 19 pages, Lasky transforms the poem into a comic. Lines from the poem are put into panels as narration or word balloons (the speaker always out of sight). Almost nothing of what one would normally consider a picture is to be found. Most of the panels are either completely black or completely white. A few of them are somewhere in between, the positive and negative space forming shapes. Across one page the various panels’ black areas form the outline (shadow?) of the raven, a sliver moon of white standing in for the eye. Another page’s panels form a black doorway. 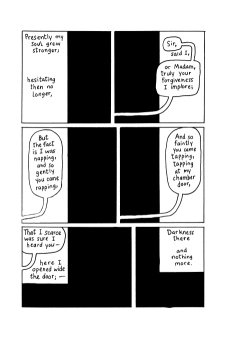 Could the pictures stand without the words? Definitely not. Can the words stand without the pictures? Certainly, they are a poem in their own right (and a vastly famous one at that). But this layout, this form of the poem brings it alive in a new way. I actually read the whole poem though and enjoyed it, I’m not sure I’ve done that before.

Is it a comic? Is it “comics”? Damn straight, it is. It appears Horrocks hints at this in his HIcksville comic, which I discuss here. (I reread Hicksville after the original post on pictureless comics.)

A post from Jon of Mae Mai includes his version of a wordless, imageless comic, and provides an image from Kenneth Koch’s The Art of the Possible! Comics Mainly Without Pictures (Soft Skull Press, 2003).

Jon has also posted his work of genius, “Portrait of a Temporal Progression as a New White Wall“. It bears a striking resemblance to this Robert Ryman work, Classico IV (1968). I think the limits of the all white comic have been reached.

This got me thinking about abstract art, color field painting, and the framing of blank paper/canvas. So I’ve constructed two “color field” comics. One is a little more abstract than the other, but I think the titles give them enough context that they can be “read” as a sequence:

A Walking Tour of the MoMA, NYC

Matt Madden has also offered up one of his Exercises in Style which is pictureless:

He also pointed out that he and Jessica Abel use the idea of a pictureless comic in their comics classes, where the students tell a story using either all black or all white panels (with text). Here are two examples from Jessica’s class:

Are any of these really imageless or pictureless (still debating the difference there but I think “pictureless” is more truthful a term)? I’ll let someone else decide.

A Nancy comic by Ernie Bushmiller.