When I met Allan Haverholm at this year’s MoCCA festival, I knew he had some new comics for the show from following him on Twitter, but I hadn’t seen much of his work. It’s always a bonus to meet someone in comics and to actually like their work. I bought the full suite of Allan’s comics and I was not disappointed. The works I got from Allan all share conceptual connection to music, providing an intriguing way to think about comics.

“Mix Tape” is a small black and white comic with a color cover that came packaged inside a cassette tape case. The covers are drawn so as to look like an actual cassette, with one cover labeled “A” and the other labeled “B.” Like a cassette, the comic must be read from one side and then flipped over and read from the other side, creating two sequences of pages that meet in the middle of the comic with an abstract two page spread.

In Slow Chocolate Autopsy by Iain Sinclair and Dave McKean, a section of text states: “Stick any two postcards to a wall and you’ve got a narrative. Unedited.” (88) “Mix Tape,” in its own way, works on this principle. While the drawings in the comic often have the appearance of (and perhaps are) sketchbook material (drawing from life), they are placed inside panels and juxtaposed on the pages, usually two panels per page. This panelling of what I believe are sketchbook images puts them into a different context than just sketches on a page. The panels change the way I read the work, not as individual images, but as sequences of images.

The sequences in “Mix Tape” don’t read as a narrative — there are no continuing characters or settings — but one can read connections, linear and non, of different sorts. For instance, one spread starts with an image that looks abstractedly like an explosion, followed below it by an image of a mushroom slice that also kind of looks like an explosion. The opposing page first shows a group of people all seemingly looking up at the same thing (out of the panel towards the reader), then a close-up of a child also looking back at the reader. Explosion, mushroom, onlookers. The idea of a mushroom cloud immediately comes to mind, people looking up at some kind of catastrophe.

Another sequence shows a rose (or flower of similar sort) with dew/water on its petals, then a close-up of a man holding his hand up to his forehead, shadowing it from the sun. The opposing page shows a seascape with a flagpole along the shore and an abstracted image that looks like stone wall, maybe a house and some vegetation. Together the images feel evocative of a hot summer day, a search, perhaps love or missing love, all brought out indirectly by the juxtapositions.

One of my favorite spreads has a more directly visual/compositional connection: 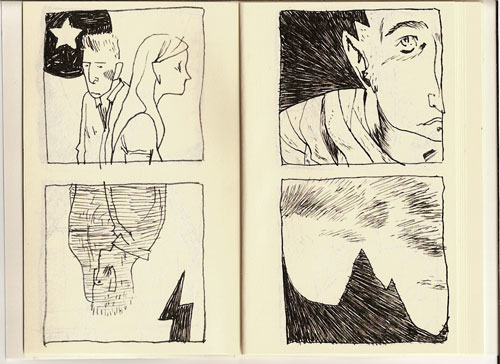 Here we see a man and a woman passing each other on the first page. The vertical flip of the characters and the shading on the second panel creates a visual sense of unreality from one to the next or the sense of a change in focus. The second page has a similar flip, this time based on the two abstract black shapes, which, while not exactly the same, are similar enough to rhyme.

From one page to the other there are other rhymes: perhaps the man in the third panel is the same as the one in the first and second; the lightning bolt shape in the second panel is placed so as to almost prefigure the shape opposite it in the fourth panel.

Can we say, Haverholm is telling a story here? No, I don’t think so, but he is putting his panels together so as to allow space for the reader to construct his own meaning/connection/narrative.

Like the songs on a well-crafted mix tape, the images have their own separate identity, yet, by placing in juxtaposition, the reader (listener) attributes some meaning to the choices and ordering.

Haverholm’s current project also adopts a musical structure. The Astoria Sessions is comics as concept album, a 13 track/story album/comic. The project is in-process but at MoCCA Haverholm had two of the “singles” and a “demo.”

“The Doomed to Fail Demo” is a 7″ square book with a 7″ single printed on the cover. The inside offers brief textual descriptions of the 13 “songs” as well as sample art for most of them, often in the form of two page spreads. The text reveals the ambition of Haverholm’s project. These comics songs are not only varied in content but will be varied in style and medium. Included in the text and samples are planned works in linocut, silkscreen, pencil, and watercolors, as well as styles based on Kirby, shonen manga, and Ikea manuals (!!!). The various comics will be based on Nostradamus, a Black Sabbath song, a waltz, black metal, and more. One comic is even planned to have the panels be letters in a computer font which would allow readers to create their own comics from the font. All in all it’s a hugely ambitious project, one that will either end in genius or brilliant failure.

The art samples available in the demo are quite promising, showing work that offers a nice tension between consistent and variable style, identifiable as by the same artist but showing a variety of approaches to the work.

Thankfully, we do not have to base any judgments on the demo alone, for Haverholm has released two of the “singles”: “Resistansen” and “Black Sabbath (intro).”

“Black Sabbath (intro)” is in a similar format to the demo, a 7″ square book with a record on the (back) cover. According to the demo this comic is based on intro section of the song “Black Sabbath” by Black Sabbath and the accompanying liner notes. It’s produced in watercolor and uses no black (except the thin lines of the drawing, which admittedly may be gray). I actually had to find a copy of the song to satisfy my curiosity about the song/comic connection. More instructive, as far as Havarholm’s sources go is the liner note from the album (labeled as “poem” if you scroll down a bit on this page), which describes a few images drawn in this comic.

One couldn’t call “Black Sabbath (intro)” a story, it’s more of a long moment, an idyll, a series of connected images, calling it a “lyric” might be the apt for a few reasons. Unlike “Mix Tape,” the images are more purposefully connected and clearly exist in the same narrative space, yet they don’t pull together with anything like a plot.

This is to say, the draw is the imagery, the juxtaposition. The colors are lovely, watercolors of dark and bright hues, mixing around a thin, meandering line. With the exception of first and last pages, there is only one spread in the comic that is not a single image. Though these images are not always a single unified setting. One spread shifts from a bell and cool blue gears to a green forest where a single figure, also cooly blue, walks. The juxtaposition of the natural world with the manmade is a frequent element of these images: bells, gears, and statues, mixed with trees, leaves, and animals. The rain and tolling bells that are heard at the beginning of the song are here found in visual form. The images almost exist out of time, the classically styled statue and metal bell offering little clue to time period or setting. The robed woman, who walks through the images seems less person than spirit or symbol.

If the rain and telling bell of the music are made visual in the comic, then the single image that ends the comic, a blast of white lightning cutting through the deep blue sky, brings to life the metal guitars that transition the song from sound collage to music.

Similar to this comic’s origin in a Black Sabbath song, “Resistansen” another single from the Astoria album is described in the demo as being based on a waltz. This volume is published by the Danish publisher Aben Maler in its “676” series. As such it is in a smaller size (5″ square). You can see some sample pages here. Once again, it’s not really a plotted story, but I’d say it’s more narrative, in its own way, than “Black Sabbath (intro).”

This single is drawn in pencil with, I think, one image down in gray washes. Again, the work is composed primarily of two page spreads. The compositions are often crowded with overlapping characters, scenes, and actions. The setting brings to mind a night club in the Berlin of the Weimar Era (think Lutes’ Berlin), an impression I get not only from the clothes and backgrounds, but also the George Grosz-esque characters.

Haverholm makes remarkable use of negative space in his images. At first a kind of rhythmic placement of blank rectangular frames, then the placement of spaces to emphasize elements in the page: a table in negative space holds a rendered handgun, a large area of negative space separates a group of musicians from the table, now rendered, still holding the gun. The negative space works as a slow revealing act on the handgun. First by framing it, then by taking on the shape of the gun itself, as seem in this remarkable spread. 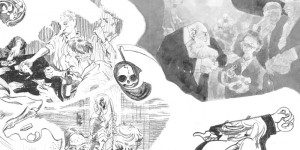 My enthusiasm for this spread increases the more I look at it. The number of times the gun is repeated through the composition in a number of ways, primarily in negative space, is amazing. The skull inside the trigger area that sits just off-center is a wonderful touch hinting at danger. The “fat cat” looking guy smushed into the shape of the pistol is perhaps an indication of the connection between business and violence (?). The gray washed area in the upper right is set off from the rest of the imagery, like a memory of the past, softened with time. And just now I noticed how the negative space gun in the bottom left corner, containing a single rendered bullet, also forms the mouth and chin of a man’s head, hinting at suicide.

Haverholm’s success with the watercolors in “Black Sabbath (intro)” and the pencils in “Resistansen” give me confidence that the other Astoria multimedia works will also prove visually evocative. On the evidence of these two singles, I have high hopes that the project will come to fruition and high expectations of its success. The idea of comics as “songs” provides a springboard for visual and narrative experimentation in a way that is more poetry than plot. Certainly, these works are more “comics poetry” than the comics adaptations of poems (often too literal) that the Poetry site has published (some of which seem to be missing now).

Sadly for you, reader, if you missed these comics at MoCCA (or weren’t at MoCCA), you’ll have to wait until Haverholm finishes the project and gets a publisher (any publishers reading this should contact the man). Though you might be able to order “Resistansen” from the publisher, Aben Maler. You can also follow “The Astoria Project” at the blog for it, where you’ll find some samples and updates, such as these images from the Kirby homage.

Edit: I should let you know that one of Allan’s comics is found in From Wonderland with Love: Danish Comics in the Third Millennium now out from Fantagraphics. You can order if direct.