One of my abstract comics (called “Flying Chief”), based on a Jesse Marsh Tarzan comic is included in this anthology.

Order from Fantagraphics (Also see some previews there.)

My story was selected as a “Notable Comic” for the 2010 edition of Best American Comics.

Here’s my statement about the piece from the anthology:

“Flying Chief” began as a combination of two experiments. The first was my thinking about figure-ground relationships in comics. From classic comic strips as the visual reproduction of “actors on a stage” to contemporary manga filled with extreme close-ups, most comics are character-focused. I wanted to see what would happen if there were no figures, and the comic was left as only the ground: the backgrounds and the empty panels. As balloons, text, caption boxes, and sound effects also tend to have the same prominence as figures, I wanted to also excise all of them. The second experiment is borrowed from the OuBaPo group. In his “Un premier bouquet de contraintes” (“A First Bouquet/Bunch of Constraints”) Thierry Groensteen (Oupus 1, L’Association, 1997) writes about transformative constraints, wherein an artist enacts some transformation on one comic to create a new work. By starting from an existing work, the artist is free to read and interpret that work in a new way. I used this idea to reread “Tarzan and the Flying Chief” as drawn by Jesse Marsh (Tarzan 14, Dell 1950). I redrew the story, ignoring text, balloons, captions, and characters, taking only the backgrounds and transforming them into abstracted shapes, marks, and textures.

Here’s what a few people have said about my story:

Proprietor of the reliable MadInkBeard blog, Derik A. Badman’s Flying Chief is one of the more intriguing contributions to the anthology. He has redrawn panels from a 1950 Tarzan comic without the characters, words, speech balloons, or captions. More so than abstraction or entropy, this strategy of absenting is highly effective in frustrating the viewer’s desire for an organizing figure. Badman’s image of a world without human agency raises more pointed questions than other contributors’ protozoan land before time and scenes of cosmological chaos.

–Ryan Holmberg at The Hooded Utilitarian

So Overby’s decorous eruptions of activity, obsessively timed and penciled, make for rewarding comics, period. The same goes for québécois cartoonist Benoit Joly’s fluid and elegant constructions, or Derik Badman’s respectful détournement of classical cartooning, where he reproduces only the backgrounds of a Jesse Marsh Tarzan strip—these are all curious, inquisitive works of cartooning, regardless of their abstraction.

-Sean Rogers at The Walrus Blog

The range of works here are impressive. Some standouts for me… Derik Badman’s Flying Chief, simple and meditative, it reminds me of Asian woodblock prints (it’s also interesting from a formal perspective as detailed in the artist’s bio)…”

Some of the best work, in my opinion, is Derik Badman’s pen & ink-inspired digital panels…

-D.J. at the Book Soup blog

and a comparison of the original Marsh panel to my abstraction: 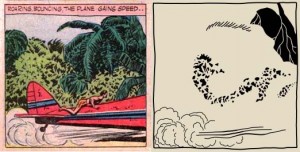