I picked this book up at the Scandinavian section of MoCCA. It can be a little overwhelming browsing through tables of comics in languages I don’t even understand a single word of, but this book attracted me visually. According to the author page at his publisher, Rui Tenreiro is a Mozambique born artist who moved to Norway and now goes to school in Sweden. The publisher is Norwegian (also the publisher of Jason) and the book is in that language, though a folded up English translation was slipped into the book that has dialogue and sound effects translated by page/panel. Text is limited in the book, you can almost read it without looking at the translation sheet at all. That said, the text does add some understanding, and the translation sheet is a nice addition. The author’s webpage has a bit more info about the book and how to order it.

What attracted me to this particular comic was the immediate visual impact. The whole book is printed in black and a very pale blue, that alone is enough to get my attention, as it’s a color combination that I always like. Tenreiro has an understated style that is minimal and abstracted: characters with bulbous heads and noses that are little more than long thin rectangles; backgrounds clear and simple. His lines are thin and consistent, with the occasional hatching to add texture/tone. The pale blue is also used for tone and texture, with its lack (coming through as white lines/shapes) offering variation within the blue. It all comes together for a very clean, refreshing style that communicates clearly.

The story in “The Celebration” is rather strange. It’s the kind of comic you finish reading and say, “what?” I’m not completely clear on what it’s going for, but I did enjoy it. The story follows two almost identical hikers (one wears a scarf, the other doesn’t) walking through a wooded landscape. In a clearing they find a dead creature that looks like a giant bean, after which a man gives them directions to the village the hikers seek. As they leave the man, he turns into a bird spirit and enters into the body of one of the hikers (unbeknownst to the other). They come upon a group of villagers performing part of their “celebration,” singing and dancing and beating trees with long sticks to make the blossoms fall from the trees. They take the hikers back to their village, though not the one the men are seeking.

At the village, the bird spirit (the “tengu” of Japanese myth, which Tenreiro mentions in his description of the book) comes out while the hiker sleeps (he seems to actually turn into a large black bird) to sit on a large egg that is somehow part of the village’s celebration. The other hiker takes a plane ride with a French pilot (?!) to see if he can find the dead creature from earlier in the story, but it is gone. At the climax of the book, the village’s celebration parade becomes a scene of violence and confusion. The egg hatches a quickly growing creature that becomes the large bean looking thing from earlier. The hikers are both killed, and the bean creature collapses in the clearing. And there are the two hikers back where they started. Perhaps they will start the same story again, or maybe this time they’ll make a correct turn and end up at the village they are seeking.

There is the air of a fairy tale or dream to the story. You can read it and follow it logically, but in the end there is no clear understanding of why things happened as this did or what it all meant. But, like many journeys, perhaps it is the trip itself that is the point. Certainly there is much to admire in the book.

In his page on the work, Tenreiro places the setting as Japan. While reading the book (before I read this particular description), there were elements in the book that seemed Japanese, such as some paper lanterns, the design of the village’s houses (single story with raised wooden floors and sliding paper screens), and the meal scenes where the hikers and their hosts sit on the floor and drink tea. In the village scenes, Tenreiro also uses a kind of isometric perspective that is reminiscent of Japanese prints. Yet, the dress of the characters does not say “Japan,” and I was just assuming it took place in the north of Scandinavia. The inclusion of the French pilot is also a strange anomaly (kind of the like the cowboy in Mulholland Drive — David Lynch comes to mind in this comic).

I noticed early on that there is a very distinct direction to the book. From the start, the hikers are travelling left to right and this continues to be forward in the book. As the hikers move along their journey, past the creature and the tengu and into the village, they continue always left to right. The opposite is also the case: when the one hiker goes with the French pilot back to find the dead creature, they travel right to left. The plane even takes off to the right and then is shown turning to head to the left. At the end of the book, the creature as it flees the village, goes back, right to left, to the clearing. 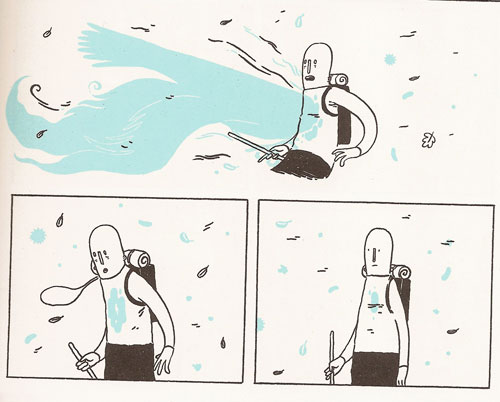 Going back often seems to herald trouble. The first time one of the hikers turns back, he is taken over by the tengu. Later, the parade during the “celebration” at the climax of the story is also going back/left. I really admire this strong sense of direction that holds throughout the book. It is reminiscent of Herge, who also tended to use the direction of reading as forward and the opposite as back. 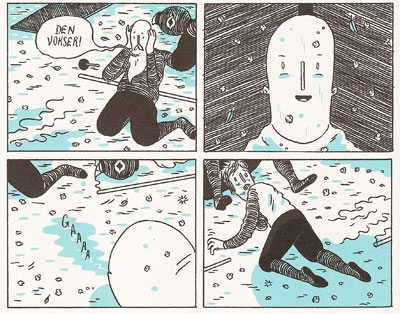 The climax of the book, where, during the parade, the egg hatches and the hiker turns back into the tengu/bird, is a wonderfully paced and composed scene. For instance: a sequence where the creature slowly grows and a man stumbles on the ground near it. The panels cut back and forth between the creature and the man, causing some suspense as to what is happening to the creature. It looks the same in its panels because there is nothing to compare it to, yet, in the panels with the man, we see not only his escalating fear but also the growing shadow. 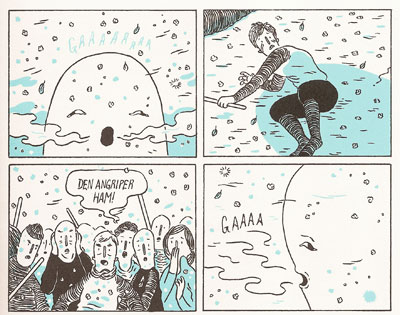 The individual panels in this scene also tend to show only parts of the events, leaving much out of frame, and also adding to the sense of confusion that surely erupts for the characters in the scene. One well composed page uses the space on the page to correspond with space in the scene. Note how the one hiker appears on the right side of the page twice, while another man, mostly obscured, appears twice on the left side, with the bird/tengu in between. There are also nice similar curves to the black of the tengu along the center-left of the page. 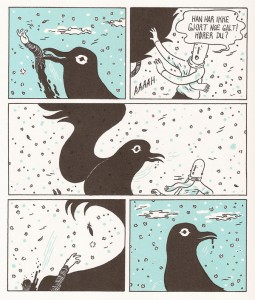 Some really beautiful imagery during the celebration at the end, too.