A quick disclaimer: Like previous years, my list is a mix of comics first published this year, comics first translated this year, comics republished/collected this year, and comics from previous years that I first read this year. I haven’t read a lot of the big books of the year that I see appearing on other lists such as X’ed Out, Weathercraft, Market Day, Wilson, Artichoke Tales, etc. (not to mention any superhero books and the like). Some of them I’ll probably get to next year (Weathercraft, Artichoke Tales) some I won’t.

Whenever I start drawing up a list like this, I immediately start to doubt my choices. Was it really that good? Everyone else thought that book was one of the best, shouldn’t I? The decision is compounded by books that I only read once and am still unsure about. I did reread a few potential favorites in the past two weeks go try to reassure myself on my choices. As is often the case I didn’t end up writing about any of these books yet (at least not in detail), so I’ve searched around to link to a few posts by other’s about the books where I could find them). This list is a bit skewed for books read in the more recent past, but it’s the list I came up with.

Also don’t neglect to look at my best webcomics list too.

In no particular order: 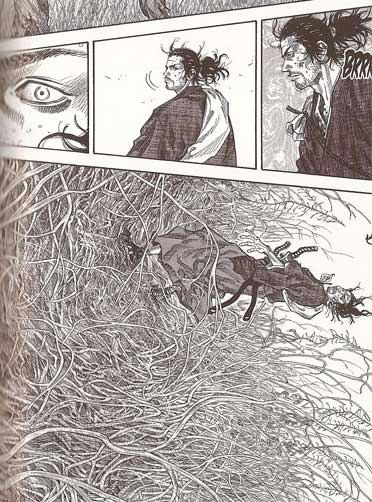 1) Vagabond by Takehiko Inoue (Viz) – I read 9 volumes of the VizBig edition of this manga series this year, which comprises 27 normal volumes… that’s more pages than all of Cerebus (though certainly less text!). This series, a fictionalized biography of swordsmaster Miyamoto Musashi, is beautifully drawn, engaging plotted, and all around awesome. There are some similarities to series like Lone Wolf and Cub, but Inoue is much more concerned about the internal life of his characters and the morality of the endless violence. In some ways, Inoue seems to be both having his cake and eating it too: drawings pages and pages of bloody sword fights, while also slowly undercutting the whole point of all the fighting and the “fight your way to the top” trope that one finds in so many manga action series. I ended up reading most of the series twice over the course of the year, and I’m hoping to write more about some aspects of it in the near future. There seems to be very little written about Vagabond (that I could find, let me know what I’m missing). Here’s a good post on one particular scene by David Brothers at 4th Letter. 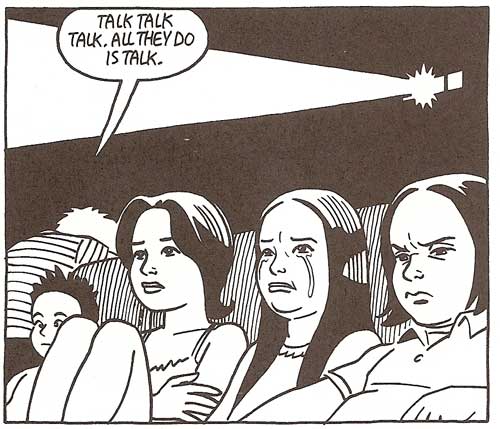 2) “Love Bunglers” and “Browntown” from Love & Rockets: New Stories #3 by Jaime Hernandez (Fantagraphics) – Two really powerful stories from Jaime, and, in my opinion, a wonderful return from those superhero pastiches of the past two issues. This is Jaime doing what he does best, advancing the lives of his characters, adding to their histories, introducing side characters, and generating an emotional impact. Lots written about this one so far including: Frank Santoro at ComicsComics, and Tucker Stone and Michel Fiffe at Factual Opinion 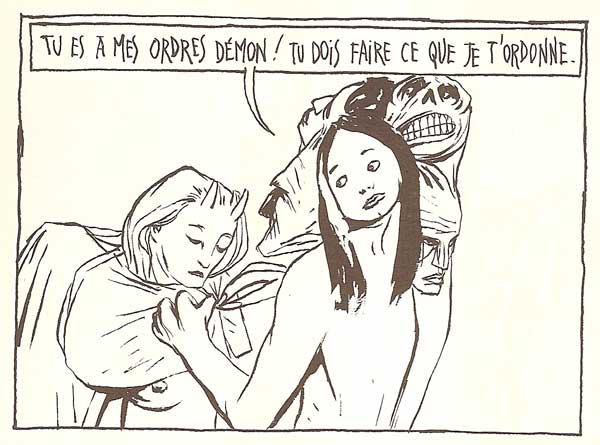 3) Conte Demoniaque by Aristophane (L’Association) – If many English speaking readers were introduced to Aristophane this year through Matt Madden’s translation of The Zabime Sisters (surely in the runner-up category for this list), my first of his books was this infernal tale of demons, hell, and the damned. This is a bleak work, drawn in a visually rich style. You should check out the very long essay by Fabrice Neaud on this book, which I translated a few months ago. 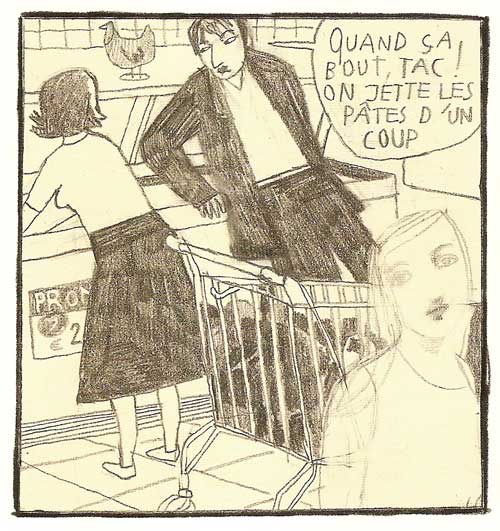 4) Faire Semblant C’est Mentir by Dominique Goblet (L’Association) – Another new discovery for me from Europe, I find it hard to believe no one has picked this up to publish in English (it’d be a perfect fit for D&Q). An autobiographical story, co-written with Goblet’s boyfriend (and co-protagonist). Goblet’s style is varied and shifting, but consistently striking in its power. From haunting pencilled images of a visit to the grocery store (where the ghostly figure of the boyfriend’s previous lover follows the protagonists) to the abstract paintings that end the book, I’ve not seen a comic that has this visual range, while still feeling so consistent. I wrote a bit about the style of Faire Semblant here. There’s not much I can find in English except Bart Beaty writing on the book and brief commentary by Matthias Wivel. 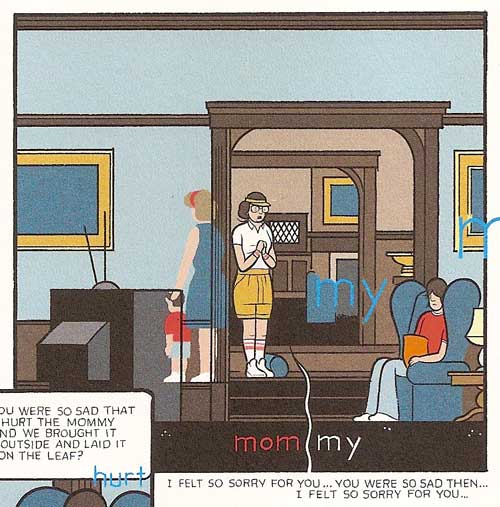 5) Acme Novelty Library #20 by Chris Ware (D&Q) – Despite being part of the ongoing Rusty Brown serial, this issue of Acme Novelty Library read like a self-contained entity and was more successful for it. Ware pulls out all the stops for this one, most impressive here is the stylistic variation he uses across the story. The art is often less stiffly iconographic than much of his previous work, so that when he does go down that path (like in the early parts of the story), it has an narrative effect of its own. Similar to #19, this issue’s story also deals with the way people can rewrite their own life stories. Some reviews: Sean Collins at AttentionDeficitDisorderly, Matt Seneca at Death to the Universe, and Brian Heater at the Daily Cross Hatch 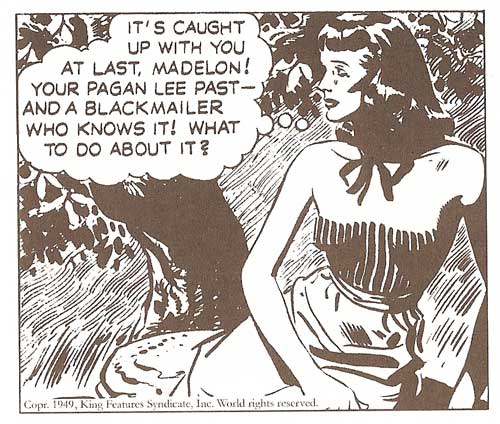 6) Rip Kirby v.2 by Alex Raymond (IDW) – After reading so much about Alex Raymond’s Rip Kirby in Dave Sim’s Glamourpuss (a comic which was half “best” this year), it was great to finally read some nice reproductions of this realist detective strip (I’d read some poor quality reproductions of two stories before but they didn’t do the art justice). The stories are pretty interesting, interesting enough when accompanied with Raymond’s artwork. Just beautiful ink work throughout. Raymond subtly changes his style with each story. I haven’t yet caught up with the other volumes, but I plan to. My favorite strip reprint of the year (just edging out Stan Drake’s Heart of Juliet Jones from Classic Comics Press, which you should also look up). 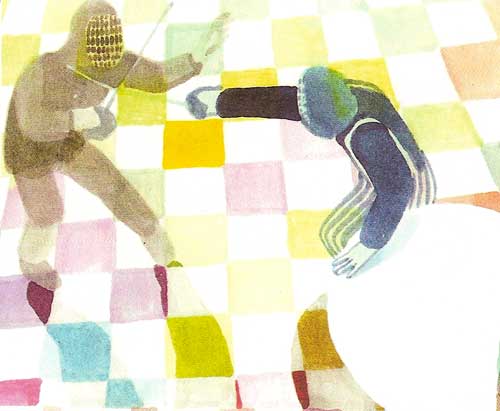 7) The Wrong Place by Brecht Evens (D&Q) – First read through you can get distracted by how beautiful this book is. Damn. Evens watercolor images are vibrant, multilayered, and really dense. He makes great use of color for narrative affect. The most obvious example is using different color text for different characters speech, but at a later point in the story he drains all color from a two page spread leaving behind a scene that is an added punch of emotion due to its greyness. On second reading the subtlety of the story comes through and you really start to appreciate this rather simple story about two very different friends. Also, as I’ve seen others notice, one of the best (at times cubistic and almost abstract) sex scenes seen in comics. This book hasn’t gotten much attention, but here are two pieces worth reading: Robert Boyd on The Wrong Place and Frank Santoro on The Wrong Place (and an interview with the artist). 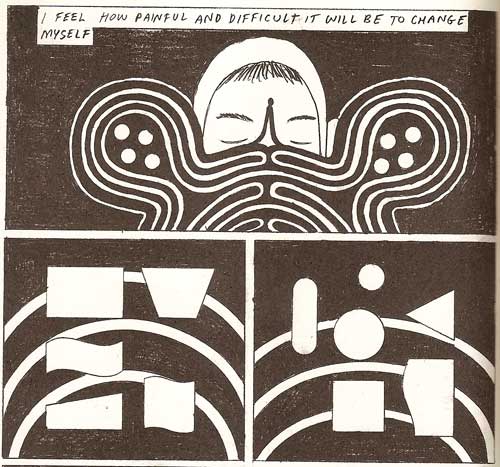 8) Powr Mastrs v.3 by C.F. (Picturebox) – The longer this series goes on the better it gets. I’m still not sure what is really going on from a larger narrative perspective, but C.F. does an amazing job with his world building and weaving together various characters. Plus, the art is just awesome, from the light pencilled drawings, to bright watercolors, to pages of abstract shapes, it’s a visual delight. Some commentary from Tim Callahan at Comic Book Resources and Arthur Smid at the Daily Cross Hatch (on v.2). 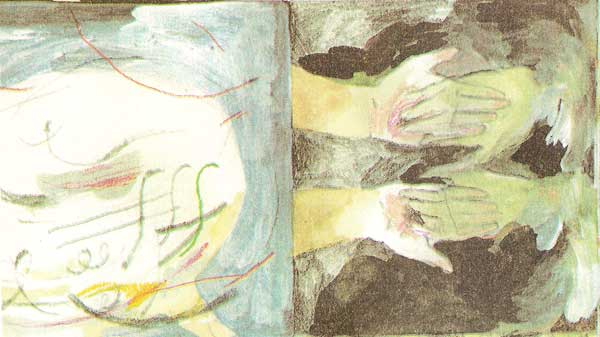 9) Vastness #2 by Aidan Koch (self-published) – As I noted in my review of her longer book The Whale, I think Koch seems to work better in shorter form (at least to this point). Probably a week after I wrote that review I got this comic in the mail. It’s a single page approximately 11″ x 17″ piece of paper printed in color on one side and folded in quarters. The single large image is divided into panels and page-like quadrants. It’s beautifully drawn and the narrative is evocative and restrained. You can see the whole thing here. It’s easy to overlook shorter works when making up lists like this, as books and series tend to feel more important by sheer weight of pages, but I think it’s important to remember that comics can come in all sorts of formats. One might even project a “best pages” of the year list. Something to keep in mind for next year. 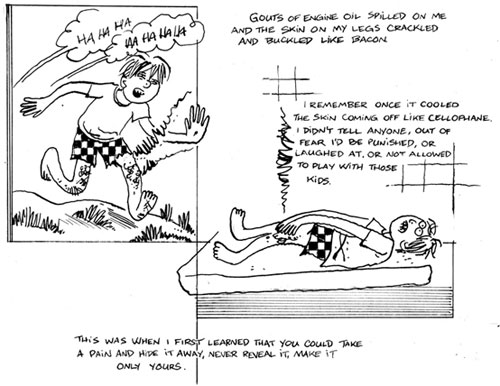 I really should have added Trevor Alixopulos’s “Old House” short story to that list, but I forgot. I love his drawing style and the way he successfully tells the story with more than a usual amount of text. It’s a great story, worth reading and rereading (and not just because it has a D&D reference in it).

For what it’s worth, these are all the (non-web, non-mini, non-pamphlet) comics I read this year (at least all those I remembered to write down, which is the great majority of them, as I was pretty careful this year in keeping a list):