Aristophane has been on my radar for awhile as one of those French comic artists I needed to read more of. This year I am extremely happy to have become acquainted with his work. In conjunction with translating an amazing article on Aristophane by Fabrice Neaud, I ended up reading his epic Conte Démoniaque (L’Association, 1996), a powerful Dante-esque story about hell, demons, and the damned (which I hope to write on at another time) and now comes this translation of Les Soeurs Zabime (Ego Comme X, 1996) as The Zabime Sisters.

First Second clearly picked the more accessible of Aristophane’s major works, this one seemingly targeted at young adults (or at least not, like Conte Démoniaque, a work most people would not give to children with its violence, trauma, and pervasive nudity) but also readable and enjoyable for adults. If not a true all ages book, it is a “most ages” book.

If for nothing else, I urge you to read this book for the art. Aristophane’s expressionistic brushwork is captivating and beautful. His line ranges from a thin sinuosity to thick dense slashes of black. In between is the rare (in comics at least) use of dry brush where the depletion of ink causes a disintegration of the density of the line, allowing for the white of the paper to show through and the bristles of the brush to become apparent. It’s a dense and loose style, even the panel borders are dynamic often with a panel having three thin borders and one that splashes into a thick swath of black. You can enjoy this book just for the art. A case in point, though they are shown in a rather reduced size, are the short stories Aristophane’s French publisher Ego Comme X has made available online (in French). Three early prequel/preliminary stories of a sort to this book (click on the little pages on the right), featuring the Zabime sisters, show off his work even if you can’t read it, though, I should note, in these stories, a slightly less evolved form of his style (ie this book is even better). (For those who do read the French text of these, I’ll add that those stories are also less effective, more childish in a way, than this later version of the sisters.)

The story is a fairly simple realism with characters and situations that are easy to accept and believe. The plot itself, such as it is, flows smoothly like a small fragment of life, a day in this case, the first day of summer vacation for the three Zabime sisters. Oddly, the event that is most built up through the course of the story, is one that barely involves the sisters, a fight between two boys, which is witnessed by only one of the sisters. This fight is mentioned early in the book and provides a momentary element of suspense and a sense of time to the story.

But primarily the story is made of small episodes, a busy day for the sisters as they play. What comes through most to me on my two (three?) readings of the book so far is the how much the children commit what one might call small evils against each other: mean jokes, taunting, humiliation, etc. They fight and forgive. These are not the idealized children you find in many stories where the protagonists are all good and the antagonist is clearly limned. There’s a honesty to the depiction that is quite refreshing.

Aristophane keeps the reader from identifying any one of the characters as the primary protagonist by shifting the focalization frequently throughout. Even the kid who has started the fight and is seemingly hated by almost everyone else, is given some amount of focus that softens (if not forgives) his actions. This shifting of focalization is primarily attained through the textual narration. The narration is not prevalent in the book, it just jumps in at certain moments, almost exclusively to give the reader a brief insight into the thoughts/feelings of a character. This is not thought balloon-like internal monologue, rather, the extradiegetic narrator just tells us something about the character: “Celina got up after making them beg her. She took particular pleasure in being pleased with and in feeling indispensable.” (p.4) “Rodrigues was as proud as his brother, maybe even more so. He was radiating self-satisfaction.” (p.18) These moments of narrative insight color our views of the characters, providing information unavailable through the imagery, pointing out motivations for actions and a limited psychology, often the invisible pleasures of taunting a friend. At some points the narration is less successful, offering much more conventionally descriptive text that is an unnecessary addition to the images, such as this panel: 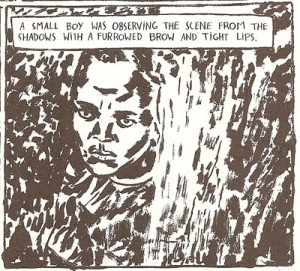 We don’t really need the text here, and unlike most of the narration, it does not give us an internal information.

The story would be interesting, but only so much if it weren’t for the artwork. Aristophane’s brushwork is so loose and expressive. The panels show a fondness for foliage. The lush foliage of the setting (Guadeloupe) fill the pages, often overwhelming even the characters (see the image below) as if Aristophane were creating the landscape itself as the real subject. And perhaps it is. The story takes place almost completely outside, and most of that time is away from any man-made structures. 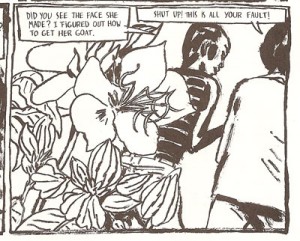 The images also use expressive effects to underscore the actions, thoughts, or other diegetic content. A few examples to showcase some of Aristophane’s art.

Here the dry brush technique is used to show movement. Similarly we see the use of expressive abstraction, which is used a few times in the book. Here’s another example: 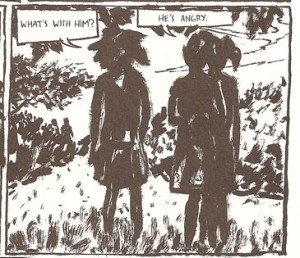 In the image below we see thick brushstrokes which cover the heads of the children as they suffer from the effects of smoking a pipe stolen from one of their fathers:

Also note the use of a wasp(?) as an adjacent symbol to the tobacco effects. The thick strokes are used in the panel below not only as representative abstractions of foliage but also to bring the reader’s view in line with that of the characters, obscuring the object of attention (a baby bird).

Here, the dry brush is applied very lightly, in contrast to the primarily very dense panels, to bring forth the fear of the children: 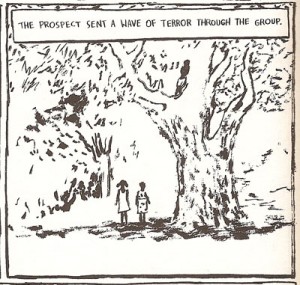 At times Aristophane’s compositions are so dense and uniform that they lose focus creating an all-over structure that can elude any easy center of attention, perhaps this mirrors the characters themselves as they too lack clear goals or attention. It’s summer vacation after all, and they are young.