Guardians of the Kingdom sounds like some kind of superhero fantasy adventure, but it is really a series of quiet vignettes about the day to day boredom of two guards keeping watch over a seemlingly endless wall. In one scene the guards can’t even remember which side of the wall is the kingdom they protect and which side is the “barbaric wastes.” This absurdity has an existential or Beckettian ring to it. Are they even guarding anything? Or from anything? The one guard thinks he sees a wolf in the hills and the other guard jokes that unless it has a ladder they don’t need to worry. They throw rocks at a stone, make tea, and joke with each other, but this is no action adventure. The lack of action and the emphasis on simple exchanges and mundanities is what really attracts me to this book. That and the art. I love Gauld’s drawing.

While they are not stick figures, Tom Gauld’s figures have a wonderful simplicity to them. The guards most often appear as nothing more than black silhouettes of a rather crude shape. I say crude but I don’t mean to imply anyone could do it. Gauld’s figure drawing has a deceptive simplicity. Rather unique in comics, Gauld uses a distant point of view for the majority of his panels. The two guards are seen from such a distance that tiny silhouettes are the most detailed they can get. We don’t need to see facial expressions to understand them, their dialogue communicates all we need. When we need to see some more detailed action or response, then we see the guards at a closer distance.

Gauld uses the small silhouettes to show the guards movement across the wall. In one sequence five long panels plot their progress from one end to the other. While the background–basically the bottom of the panel filled in with black to represent the wall–remains static, the silhouettes move from one end to the other across the five panels. In many of the sequences, Gauld stresses the movement by his placement of the characters in the panel, often at the far left of the panel on the left side of the page and on the far right side of the panel (in many cases we only see one of the guards as the other has gone off panel) on the right side of the page. This not only provides a reminder of their repetitious movement, but makes for a more visually interesting page. Perhaps that is the key to this story, the interesting way Gauld tells a banal story, using visual layouts, humor, and dialogue. 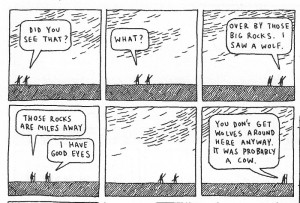 Gauld’s art (particularly the figures) is minimalistic, but he does use a staggering number of marks on his pages. Open the book to the first page and you see a full page panel depicting a mountainous landscape and a huge sky that is filled with short hatchmarks that weave a multi-tone cloud cover. These tiny hatchmarks are used throughout the book. It must have taken hours to do some of these panels. The effect created from these marks is distinctive and rich. The panels have a lot of texture and character because of it.

I haven’t read a lot of Gauld’s work, but ever since I saw his series of single page stories about authors in Kramer’s Ergot 5 I’ve been fascinated by his style. He packs a wealth of opportunity and potential into a minimalist style (for example, his one page “Characters for an Epic Tale”). Unfortunately he doesn’t seem to be the most prolific of comic artists, but there are a few things available at diffferent mini-comics distributors and at Gauld’s Cabanon Press. You can see some samples of his comics and illustration work here.