If you’d told me a couple years ago that I would be reading and enjoying a Tarzan comic from the 50s, I would have scoffed. But, this stuff is good. After reading a few convincing articles on Jesse Marsh and his Tarzan work (for instance, the long article in Comic Art #9 by Ron Goulart or Jesse Hamm’s posts), I found some online scans of stories and got hooked just in time for Dark Horse to start releasing these new reprint volumes. Each volume holds a year’s worth of issues. Some restoration has gone into the books, but I’m not sure how much. Some of the colors (particularly lighter ones) still retain a dot pattern, though others are solid. Some of the stories have poor line quality but most look pretty good for 50 year old comics.

I’m utterly drawn in by Marsh’s art, compositions, renderings, colors (okay, not sure he was responsible for those). He tells the story, and he does it with style. His character renderings have a bit of a drawn-from-life/staged-model quality to them. You might fault it for being stiff and posed, which it is, but I don’t think that is necessarily bad. Despite their stiffness, Marsh’s figures fly across the page. He often shows Tarzan leaping from one tree to another, suspended in mid-air, or wrestling with some animal or human, using the composition of the panel and sequence of panels to make the stiff figures dynamic and engaging. 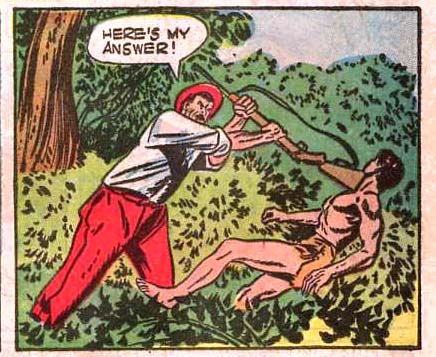 The figures add a geometric quality to the images, which contrasts nicely with the flowing jungle of the backgrounds (see above). The swaths of color and feathered strokes that make up Tarzan’s world are almost abstractly rendered, yet they retain their representational necessity. Whoever did the coloring was working with an extremely limited palette–primarily: two greens and two blues with a single yellow, orange, and purple–to pull Marsh’s marks into planes of fore/mid/background. The colors provide a consistency to the pages and in their simplicity help ease of flow of information. I even stole these compositions and colors for one of my abstract comics.)

Marsh’s art has a realism to it. His animals are carefully and realistically draw (and there are lots of animals in these stories) and the people are all realistically proportioned. Even Tarzan, the superhero of the story, is drawn so that he looks like a human (modelled on Tarzan actor Johnny Weissmuller I believe). As I understand it, Marsh researched African tribes to add realism to his portrayal of them, too. In this respect, these Tarzan stories seem different than other jungle comics I’ve seen (admittedly not many), in that the natives are not portrayed as a single uniform stereotype of the savage jungle dweller, rather Tarzan encounters all sorts of tribes and groups. The only group consistently portrayed in a poor light are Arabs, who are always the evil slave traders, given no chance to be shown in any positive light.

I haven’t seen much written about these new collections, which is a shame as the work here is well worth reading. At another time, I’ll have to spend a little more time looking at a single story. For the time being, couple small examples… 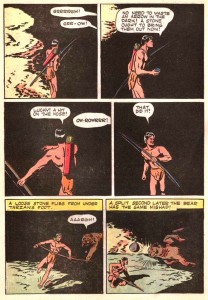 I love this page of Tarzan trying to get a bunch of bears out of a cave. Marsh slathers on the black so that Tarzan is seemingly headed into an abyss. The yellow stones slip away until there is only impenetrable darkness.

This panel transition from the bottom of one page to the top of the next (in volume 3 of this series it also involves a page turn, though I don’t know if that is the case in the original) is an interesting use of a larger gap in time to accompany the larger gutter (so to speak). While we’re at it, note the harsh geometry of the backgrounds here (in contrast with the jungle in the image above) and the skillfull composition of the group of small figures and their dark shadows in the second to last panel. The second panel is of a type Marsh uses a lot, showing only the head and shoulders of a couple characters with a blank background. Somehow he always makes those panels so interesting. In this case he fits four heads in there with a clear sense of their spatial relation to each other. That last panel is a bit awkward with its centered figure and background statuary (which seems to come out of nowhere).

These panels make great use of scale to show Tarzan’s smallness in relation to both the landscape, the skies, and the pterodactyl. And check out those awesome clouds in the second panel.

If you want to read some of these stories, you can find a bunch at this Edgar Rice Burroughs Webzine page. (The images above are from that site. Those in the book are much cleaner.)

[This is part 8 of a 30 part series where I am writing daily reviews for the month of December.]