It is de rigueur to praise Winsor McCay for “inventing the grammar of comics” or for his draughtsmanship or his imagination. It is hard to read Little Nemo in Slumberland without thinking about all the praise that is heaped on the strip and its creator.

McCay is perhaps the first cartoonist to stray from a realistic setting in his comics. Little Nemo’s dreams are far from the streets of the Yellow Kid or the milieu of Happy Hooligan. While Nemo’s dreams often take place in realistic settings (cities, forests) they are accompanied by an altered perspective (Nemo bounds through a city, standing as tall as the buildings) or fantastical inhabitants. Many of the strips take place in one of the palaces of the King of Slumberland, lushly decorated in the art nouveau and neo-classical style that McCay frequently uses.

McCay created some of the earliest animated cartoons and his interest in animation is obvious in Little Nemo. A great percentage of the strips feature some kind of closely delineated movement (growing, shrinking, stretching) or time sequence, usually both. McCay is a master of this sort of panel progression where some item(s) in the panel slowly changes across a sequence of panels. In most cases this progression is the focus of the strip. This use of panels and timing is unique in early strips, and mostly unique for what has followed. Rare is the cartoonist that uses such a great amount of panel transitions in this way.

Here’s a particularly unusal example, wherein the characters’ representation becomes more and more abstract and childlike. A great example of stylistic inconsistency (in a good way) in a comic. 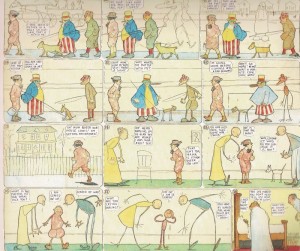 In Little Nemo, McCay also pioneered certain aspects of page layout. He used varying width panels to emphasis the height, width, or relative size (to other panels) of the contents of panels. One famous example has Nemo’s bed growing long legs. The panels start out rather short, but as the legs on the bed grow, so do the panels, becoming taller and taller. Here is half the page, the other half is one strip of very tall panels. 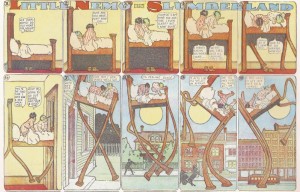 His panels also emphasis space. Through page-wide panels, or other larger than normal panels, the space in a scene is emphasized.

In a page from 1905, Nemo gets on stilts that grow taller and taller across five panels, which grow in height accordingly. The space below these growing panels has a corresponding shrinking movement, which is used to show Nemo falling from his stilts when he is attacked by very tall storks. The falling Nemo approaches the ground with the panels shrinking above him. It’s a wonderful sequence that takes advantage of the panel sizes. 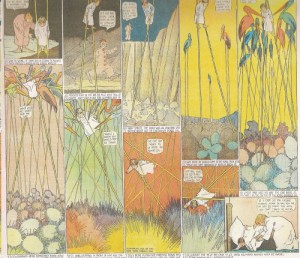 Another interesting technique is using a single background broken up across a series of panels, where the foreground does not have a movement corresponding to the background. That is, characters standing still, but the background moving through the panels. Hard to explain, so look at this example where the last three panels show what I am trying to say. Also note the slow transformation of the one figure, typical of McCay’s transitions and transformations. 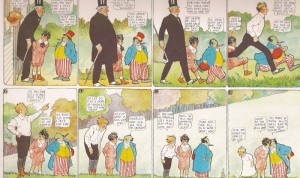 While McCay is praised for his dreamscapes, I don’t find Nemo’s dreams particularly… believable, as dreams. I find that most dreams have personal resonances, yet Nemo’s dreams (or at least what we see) show little of his personality. In fact, one of the great failings of the strip is how devoid of personality Nemo is. I have read somewhere (so much for citations) the idea that Nemo is empty so as to serve as a reader stand-in. I’m not convinced of the idea, as even then Nemo’s dreams are not like any dreams I’ve ever had or heard of from others. Rather, the dream framing seems to serve as an excuse for the fantastical elements of the story, perhaps more palatable (at the time) as such rather than out and out fantasy. McCay’s Dreams of a Rarebit Fiend strips (more on them in a future post), on the other hand, seem much more believable and necessary as dreams.

McCay’s drawing skill is impressive and humbling. While his figures are often tiny in Little Nemo (and not as well drawn as in some of his other works), his backgrounds are the real focal point of the strip. The detail with which McCay illustrates the palaces of Slumberland and the various fantastical places Nemo visits, as well as the normal objects and places that take on surreal qualities, creates a greater sense of realism in otherwise unbelievable contexts.

Looking at some of his uncolored strips (a few examples in the Masters of American Comics book), one can see his unvarying line that seems to exist in two widths, a thin line used for most of the drawing and a thicker one for outlines and emphasis. McCay’s line is precise and often very geometric, as if he knew exactly where the line was going and just put it there.

Much of the visual impact of the strip comes from the colors, which, as I understand it, McCay was closely involved with (more so it seems than any other comic artist (take the rather jarring colors in the most recent Krazy Kat reprint book)). The color palette is enormous and ever changing, from the bright and garish to the dull and subdued. Take a look at this strip (broken into two parts due to its size) where not only do we get a fantastic example of McCay’s background transformations (as focal point of the strip) but also some beautiful coloring in the sky. 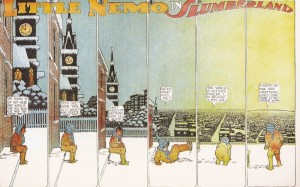 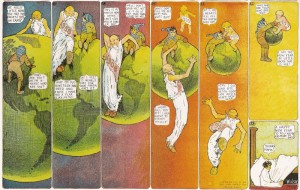 Unlike his predecessors and contemporaries (and many that came after him), McCay uses a very strict perspective to create great depth and space in his panels. While many comic strips have the look of actors on a stage, McCay’s pages stretch into the distance. Note the wonderful staircase in the first panel here.

The word balloons and dialogue in the strip are some of the most pitiful, redundant examples of such I’ve seen. The words are scrawled in tiny characters, closely packed within the tiniest possible balloon, and the text itself rarely adds to the strip, instead consisting of endless streams of exclamations and the characters telling us something we already see on the page. It makes “reading” the strips downright difficult. (Any of the examples above will serve.) (It is interesting to note that R.C. Harvey so intent on the integration of word and image, does not discuss this aspect of McCay’s work in his chapter on such in The Art of the Funnies.)

In the collection of Little Nemo strips that I have, Bill Watterson writes that he admires the strip more than he likes it, and I have to agree. The strips are impressive, but on the whole, I don’t find myself wanting to read them. McCay’s imagination and art overshadow and help one overlook his lack of storytelling skill. I can marvel at the transformative sequences, but I don’t care what happens next. I don’t feel moved by Nemo’s adventures. I don’t laugh. I don’t cry. I don’t reflect upon the world or myself.

It’s the storytelling element that I find lacking. McCay’s strip is more like a fine painting than a great novel. This is a place many comics occupy, the pull between the visual aesthetic and the story/narrative/thematic aesthetic, but McCay sits firmly and greatly on the visual side. More so than many works of comics art, McCay’s pages could hang on a wall in isolation from any context, continuity, or narrative.

(Next part: McCay’s other works as found in Fantagraphics’ Daydreams and Nightmares.)