Webcomics used to be so much about series and strips, but it feels like as time passes comics on the web are more inconsistent things: single pages, short projects, excerpts, one-off issues, journal comics, etc. As I browse through my feed reader, I have very few items left that link to ongoing comics series, fewer still where the series seems to be regularly updated anymore.

Mostly what I end up following are artist’s websites, blogs, tumblrs, or flickr streams to see whatever their latest work is. This is supplemented by a few group sites (like Grandpapier). Because of this fragmentation of webcomics it’s hard to go back now and make a comprehensive “favorites”/”best of” list for 2011, but I tried. Some of these works came immediately to mind, others I recalled after taking a trip through the list of feeds in Google Reader: 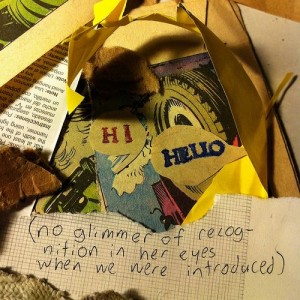 1) Top of the list has to be Jason Overby’s recently completed 2101. Pardon the colloquialism, but… holy crap this comic is awesome. How can you even begin to describe it, it is so unlike anything else out there. Over the course of twelve long horizontal scrolls, Jason has created a powerful, rich comic that is created from photographs of collaged, drawn, sculpted, photographed, painted panels. It is a true mixed media work of comics. The images veer between the abstract and the representational, the expressive and symbolic, the narrative and poetic. The narrative content unfurls as a narration by a character who described himself as an “A.I.”, skipping back and forth in time to discuss his life, his wife, and the A.I. they create. At one point “Jason Overby” intervenes in the narration which opens up room to read the comic as metaphorically autobiographical–or perhaps not as “Jason Overby” could himself be a fiction in the comic (as opposed to Jason Overby the artist). I’m finding it hard to say anything useful about this comic, sometimes it’s like that with truly unique works. I highly recommend you take the time to read the whole thing… right now.

Some other highlights from the year in no particular order: 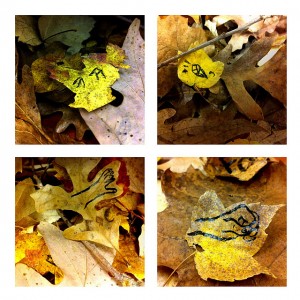 from Warren Craghead's 30 days of comics

2) A few of my #30dayscomics compatriots did some amazing work in November. Especially check out pages by Warren Craghead, Allan Haverholm, and Simon Moreton. (Mine start here.)

3) The curatorial efforts of Blaise Larmee on the Alt Comics tumblr is well worth following/exploring. If nothing else it will force you to question the limits of what is a “comic.” 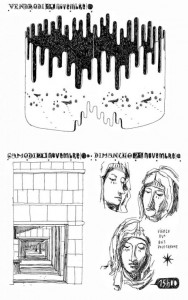 4) Pascal Tessier’s work especially the ongoing serialization (almost complete) of “2010 (Tout)” on Grandpapier: The latter is some form of sketchbook/journal that Tessier publishes a year behind (i.e. right now he’s posting the December 2010 pages). Lots of life drawing, quotes, sketches, abstractions all in Tessier’s sharp, thin-lined style. Even if you can’t read the (fairly limited) French text, the drawings are worth it.

from Pages by Jaakko Pallasvuo

5) Pages: Letters between Aidan Koch and Jaakko Pallasvuo: This short lived series of comics letter between two young and visually innovative cartoonists was an interesting experiment and worth browsing through. (I just got Pallasvuo’s new comic from Landfill, but haven’t had a change to read it yet.) 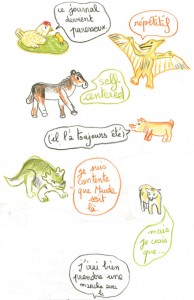 6) Julie Delporte’s journal comics (English versions of some/all): Delporte is currently one of the fellows at the CCS in Vermont, which is quietly in the background of the recent pages. There’s something about the candid text and colored pencil drawings that I really like. I wrote a bit about some of her comics in my BCGF round-up. 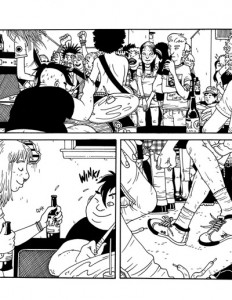 7) Sacred Heart by Liz Suburbia: A serialized story about teens in a small town. Lots of punk rock and what appears to be a delving into fantasy/horror realms, also there are, so far, no parents at all, which I’m guessing is somehow relevant. You can see Suburbia’s drawing skills grow quite a bit over the course of the fourteen chapters.