In the next few weeks I’m hoping to post about a few of my favorite comics from the past year, focusing mostly on ones that I think were overlooked. Here’s the first of them…

My love/hate affair with comics anthologies continues… I was really excited for this anthology when I first heard about and then wasn’t too impressed the first time I read it. But over time it’s grown on me. It’s not a great anthology (but how many great contemporary anthologies are there?) but it is a good one and, perhaps more importantly, a pretty consistent one.

Artist Aidan Koch edited this collection of comics from Publication Studio, a publisher that has not previously done any comics (which might partially account for how I’ve seen no reviews of this). They are a print-on-demand publisher who also offers their books as DRM-free ebooks (pdfs). Many of their books (including this anthology) were available as free downloads, but that appears to no longer be the case. The “free reading commons” links are there but I get stopped at a login. Perhaps the free pdf model was not working out for them.

If you look at the list of contributors above, you’ll probably already have a certain idea of what this anthology will be like. If you are familiar with these artists you won’t be surprised by their work here. It would be tempting to try to group these artists together under some kind of label: many of them are friends/acquaintances (in her brief introduction Koch states as much) and have appeared in anthologies together before, many (most?) of them live or have lived in the Portland, Oregon area. More importantly though, is what they share artistically. Most of these artists (and specifically the comics in this anthology) are working on the margins of comics. A number of the pieces make use of collage as well as abstraction in one form or another (though none are completely abstract comics). Most of these comics are also not traditional narrative work. They are more like flash fiction or poetry than short stories. But that is all generalization on some level.

The anthology starts out with a short story by Ward Zwart, the one artist in the book I’m not at all familiar with. I think he’s a Belgian (?) artist (based on some searches online). His piece is probably the most traditional in the book. In fairly realistic pencil drawing, he tells a brief first person narrated anecdote about a girl and a squirrel. It’s kind of funny in a quirky way, but it really made little impression on me. 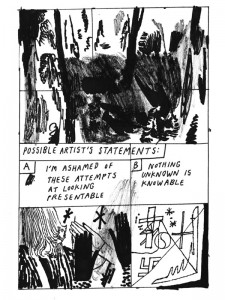 This is followed by Jaakko Pallasvuo’s “New Sincerity” which reads like a illustrated letter, a first person narrator (autobiographical, I assume) addressing a reader. I’ve read a couple comics by Pallasvuo, including the short-lived series of comics letters between he and Koch, and I really love his fragmented geometric page layouts and the way he combines the representational with the abstract in a kind of shifting spectrum of juxtaposed images. The last page includes the text “Possible Artist’s Statements” which aptly summarizing the comic as a whole. That last page (above) itself is worth the whole comic.

From Pallasvuo’s drawings the book moves to Dunja Jankovic’s collage story “New Waves.” The discordant imagery mixed with texts about extrasensory practices makes it read like a comic made by the Surrealists. My collage preferences tend towards a more consistent imagery (which goes against conventional collage I guess), so I don’t find the imagery particularly attractive. But I do like seeing this kind of experimentation with media going on. Jankovic has a collage piece in the new Küs! anthology that is, in my opinion, more visually successful. (Both stories also appear be reprinted in her new self-published collection Circles Cycles Circuits.) 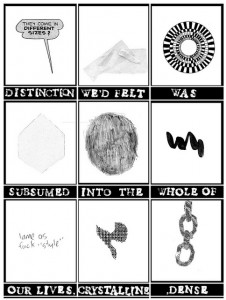 Jason Overby’s “Wabi Sabi of the Hell’s Angels” feels more restrained than a lot of Overby’s previous works, a strict 9 panel grid of image/text combinations, but also considerably more abstract than his earlier narrative works. This is the most poetic of the anthology’s comics. There is, to my mind, no single reading to be made. The text is grouped into 2 pages (first and last) containing 9 single words and 2 pages with a sentence spread across the nine panels, a nice formal arrangement that allows the more coherent sentences to play off the fragmented words that precede and follow. The images—comprised of abstract marks or shapes, collage, and even text (where the text works more as an image than the text that sits under the panel)—offer less an illustration of the words than an oblique accompaniment that is both frustratingly difficult to comprehend and pleasantly open to interpretation. Over the course of the 4 pages, Overby also uses 4 variations on the primary black/white colors of the panels and gutters.

This is followed up by the more narratively direct (though still visually abstracted) “Here I am” by Austin English. As I noted in my BCGF round-up, this story is printed with four images per page that reduces them if not to incomprehensibility, then at least to a level that makes the contents harder to parse than in a slightly larger format. If Austin’s story is more straightforwardly narrative than many of the comics in this anthology it is also, in its narrative, rather mysterious. Austin’s story more and more seem to eschew any explanation, they are sequence of events, people interacting, often in their living spaces, that have little of the psychological introspection that one might expect from such a plot. Austin’s visual abstraction varies from that of Overby, who is often non-representational as whole. Instead the images here are transformations of narrative content into something chaotic, expressive, and, in its own way, decorative. Unlike Pallasvuo’s juxtaposition of abstract and representational, Austin’s usage is much more integrated. 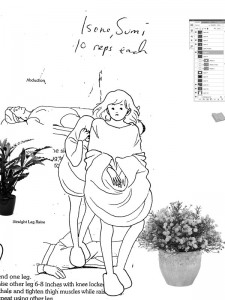 For something completely different, Blaise Larmee’s “Atrium” consists of three double-page spreads that take the juxtaposition of comics panels and transform it into a layering of time/motion. The second and third spreads add layers of content onto the first spread, building up the the collage-y elements in the background and adding repetitions of two foreground figures (those girls that Blaise uses so often) in different stages of movement. There’s an element of playful meta-commentary in the far right side of the images showing a screenshot of the Photoshop “layers” panel over a tiny book icon (whose page is seen turning from one image to the next). Like a lot of Blaise’s recent work, it’s a kind of purely visual comic, neither narrative story nor in the poetic register, and in that regards it is quite successful. 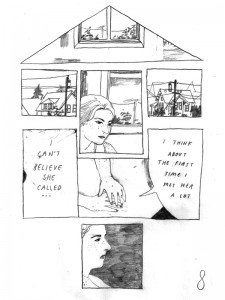 Editor Koch’s “Melancholy Heartbreak”, despite it’s rather melodramatic title, is a subtle narrative piece. Each page seems to narratively exist in its location with a different character and setting. Together they build up the image of remembering someone lost to the past, a kind of wistful wondering. Like much of Koch’s work it doesn’t overstate the case too much. The page layouts take on an appearance like slanted roofs on structures (see above). The last page falls into geometric abstraction with a mostly erased block of text. Another successful piece.

The anthology ends with Clara Bessijelle’s “X Ray”, a short narrative drawn in pencil (more caricatural than Zwart’s) each page as a full-size image. I just don’t know what to make of this one, it feels incomplete. It seems to be telling a story: a scientist with an x-ray of a spine goes out to lunch with another scientist. Another man disturbs them… the whole time the first man is holding up the x-ray. I’m not clear what Bessijelle is attempting to do here.

All in all, this is an anthology that offers some directions comics can go beyond what has become the mainstream of alternative/art comics (for instance, relying on pulp genres). If they are not all completely successful works, they are at least the works of artists attempting to stretch themselves and the form. What most holds these works together aesthetically is the way that each work requires the reader to engage on more than a simple reading of text and comprehension of representational imagery, more than just connecting the action in one panel to the action in the next panel. Each works with omission and subtlety in various ways, some more successfully than others. My biggest qualm in recommending this anthology is the $20 price tag on a 65 page black and white softcover. That seems a high even for a print-on-demand book. Maybe you’ll want to try the pdf for $10.