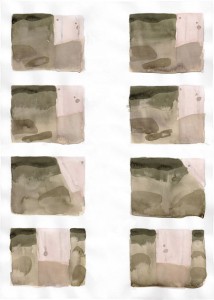 The first page from issue 7.

Oliver East’s Trains… Are Mint series has transitioned to a web format for the past couple issues. He’s serializing a longer piece, so the web format is more to maintain some continuity of attention until a completed book is created. Rather than parsing out the pages in some kind of schedule, he’s just putting the whole issues up at once as he gets them finished. He just posted issue #7 which contains the second part of a story started in issue #6.

The story being serialized is a biography of sorts of a friend of his. This at first sounds like quite the change for East, whose previous works have all been primarily a record of his walks. But, this biography is also a series of walks, though this time, East is one step removed. Rather than recording his own walks and thoughts, he is walking with his friend, recording her words as she talks about her life and how the places they walk relate to it. This concept is a really exciting variation on East’s work, a new slant on a familiar concept. His friend’s biography (such as we’ve seen so far) seems rife with troubles, as they visit multiple sites of abuse. East doesn’t resort to dramatizing these scenes, for the most part he focuses on the contemporary scene, the landscape, the buildings, he and his friend walking and talking, occasionally stepping aside to capture nearby scenes like a woman walking barefoot in the shallows of a pond.

Artistically, with each issue (or book) you can see his style evolving. His people have become more assured in their abstract way. His use of water colors has become richer, more controlled, yet still maintaining a lovely murkiness at times. I love the way I often have to interpret the images, they are not the cartoon epitome of iconic images, rather they have a stylistic uniqueness to them that seems very personal. He can shift between an image that maintains more conventional sense of perspective and space to an image that is almost completely abstract (check out that first page of the story).

As I understand it, East doesn’t come from a background of reading lots of comics, so it’s interesting to see when he doesn’t fall into easy comics conventions and when he seems to stumble upon elements that have a familiarity. For instance, his use of text is much less structured and visually separated from the images than most comics. Text is not separated by boxes of balloons, and often it is just written write on to an image as if the narration were written onto the landscape. Or, we come upon an example where the page is a single large image divided into panels like one of those old Frank King Gasoline Alley Sunday pages.

I should clarify that my description of the story above applies more to issue #6 and the first part of issue #7. The latter two sections of issue #7 are slightly different in nature. The second part, only two pages in length still has the woman’s narration, but the images, divided into thin panels are lineless color washes that hint at the shadows of people but primarily retain a mystery of illegibility to me.

The third strip seems to step inside one of the woman’s stories. The images show an endlessly repeated house from a vantage like standing across the street from it. The colors of the day/night changes and occasionally some object crossed in front of the view, but primarily the house is just shown in each panel from an unflinching point of view. Accompanying these panels is a text that also seems to take a single point of view, that of a woman, facing some kind of illness. The text skips between descriptive text of perhaps her sensory experience, her thoughts, and dialogue she has with people. Again there is a certain sense of displacement from a complete grasp of what is going on, but I believe it is a purposeful (and successful) holding back of information.

All in all, this could be East’s best issue yet.

I never wrote about his most recent book Berlin and That, as most of what I had to say felt repetitious of what I’ve already written about his previous books, but I do recommend it if you want to see more from East.