I haven’t written about Gasoline Alley yet, though I’ve been buying and reading the reprints that are coming out– the three volumes of dailies from Drawn & Quarterly and the Sundays collection from Sunday Press. I feel like I can’t say too much about this strip. I tend to focus on formal elements of comics and Gasoline Alley reads so transparently. Frank King created a daily piece of realism in comic strip form. While his characters are visually more abstracted than Leonard Starr, Alex Raymond, or the like, the stories (story?) is by far the most grounded in reality of any comic strip I’ve read. This isn’t to say King is not creating a plot (say in contrast to straight journal strips), but rather that he isn’t working in any of those most popular of comic strip genres: fantasy, adventure, mystery, or even gag-a-day. Walt and Skeezix do not end each week (or day!) in danger like Terry or Annie; we don’t find a punch line every day, nor does King ratchet up the melodrama (like Starr) or the fantasy (like McCay). Gasoline Alley keeps a mostly even keel, though King does insert the occasional dramatic turn, such as the ongoing mystery involving Madame Octave and Skeezix’s origin. The strip is less about a never ending succession of tension and release, than it is about rhythm, repetition, and time. While the process of time is not obvious from one strip to the next, over the course of hundreds of strips time accumulates, seasons pass, characters age (Skeezix in particular at this early point in the strip). The daily comic strip, moreso than any other form, seems to be the ideal way to express this slow passage of time in a way that the reader feels and sees the time passing.

At times, I regret reading these volumes in large chunks. I sit in bed at night and read a month of more of strips, watching time zoom by. Ideally I should read these strips one a day in some semblance of the time passing in the strip and to replicate the original experience of a newspaper reader from the 20s. I don’t feel this way about all the comic strip reprints I read, but Gasoline Alley would benefit from this type of reading (if only there were a web version with RSS feed for me to follow!). I want to feel the passage of time in rhythm with the strip.

I don’t normally find myself entranced by such realist fiction. Novels of this sort leave me bored, but these 4 brief moments of time a day have captured me. I’ve bought the illusion of reality that King is selling, except… three volumes in, I started wondering about that (mostly) unavoidable aspect of life that is not even hinted at over the course of years of dailies: work. Do any of these characters work? Walt has a house, a car, a maid, a child, and then a wife, and yet we never see him at, going to, or coming from any type of job. Ditto for the rest of the characters. During the course of volume three I became particularly focused on this issue as Walt and friends buy a summer hotel and spend months away from home managing it. Later he spends time in Florida speculating on land then away on his honeymoon. Even if he had a job, he was away from it a lot. I bought King’s illusion so much that it took me this long to realize that he too, like so many other cartoonists is weaving a fantasy, be it ever so humble. I did notice one Sunday strip in which Walt mentions working at the office. One! I wonder at this absence of work and hope it is addressed at some point (some small indication of what Walt does), but it doesn’t keep me from enjoying passing the time with the denizens of Gasoline Alley. Seeing the seasons pass, the holidays, the birthdays. Day after day.

The dailies’ art, like the story are also almost invisible. King doesn’t have the technical sheen of McCay, the exuberance of Herriman, the flash of Caniff, or the wonderful crudity of Harold Gray (though he is closer to Gray than any of the others). King almost never varies the distance from which we see the characters. They are almost always pictured as full-figures that fit the proportion of the panels themselves: just tall enough for the character to stand with a word balloon above his head, just wide enough for two characters to stand next to each with a bit of background. King never alters the point of view for dramatic effect. About halfway through volume 3 I noticed a few close-ups, but even then they were strips where every panel was a close-up. The most adventurous the dailies get are a number of strips done as silhouettes (usually Walt and Miss Blossom out on a date, see above). Most often, over the course of the dailies, compositions are repeated with small variations. Repetition and slow change, the art reflects the story (see the first strip above).

In the endless everyday, there are always the days where we step outside the repetition, if only to find a new repetition in variety. Weekends bring a different repetition than our weekdays, and so does Frank King step outside the story and art of the Gasoline Alley dailies for the Sunday pages. The Sundays are both visually and narratively outside the dailies’ range, yet they maintain a certain sense of repetition, even in their stylistic and formal variance from the dailies.

The Sunday strips (at least the one’s I’ve read from the 20’s and early 30’s) step outside any of the storylines of the dailies to show brief meditations, dreams, fantasies, and various scenes of a more conventional type. With the expanded space of the Sunday pages, King can tell more self-contained narratives. He does make use of certain less direct series such as the yearly Autumn walks of Walt and Skeezix, the pages where the two use their “seven league shoes” to imagine traveling across the world, and a great three part series of Skeezix and friends playing around a house during three stages of its construction. Throughout, King puts most of his cast aside to focus on Walt and Skeezix alone with only the occasional appearances by others (most frequently, younger son Corky). Even Walt’s wife only makes a few brief (and non-speaking as far as I noticed) appearances.

The extra space also lead King to vary his artwork. The Sundays move away from the consistent side view middle shots of the dailies to use a greater variety of viewpoints and figure sizes. He pays much more attention to backgrounds, letting the characters breath in the panels and often letting the background become the focal point of the strips, with characters talking over an ever changing series of landscapes (the “seven league shoes” strips, many of the dream strips). The weekends are the times we look up from the world and see more of what is around us.

Some of the most famous Sundays use a single background that is divided up into the 9 or 12 panels of the page with the characters traversing from one panel to the next (the strips with the house being constructed do this). Reading these pages is an odd experience. The all over composition of the backgrounds tends to lead one’s eye along a path that is not consistent with the regularly organized action of the characters and their dialogue. I find myself wanting to read these pages like a Brian Chippendale page with a snaking path across the page, or else follow some other path from panel to panel, one that is not left to right, top to bottom. They are impressive pieces (and perhaps unique, at least for their time) but also problematic compositionally. It does make a direct use of panels as time, physical space (on the page), and narrative space (in the story) at once in a way rarely seen. 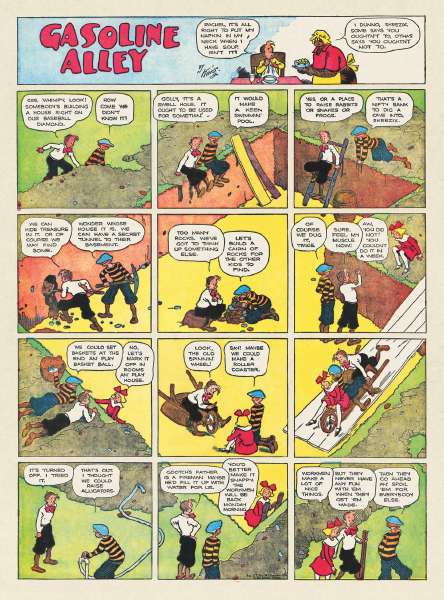 Some of the other most famous of the Sundays make use of stylistic variations, borrowing looks from wood cuts or modern art (cubism, fauvism, and the like). These seem to be much more the exception than the norm. Of the one’s in the Sundays book like this, I had already seen all of them elsewhere (online or in old Drawn & Quarterly annuals).

King didn’t jump right into these various excursions from his normal methods. The earliest Sunday pages look very much like a large daily strip. Over the course of time one can see him taking advantage of the space for greater detail and more dynamic compositions, then into other types of experiments. Unfortunately I think in reading these pages as a group they lose some of their power and become, ironically, repetitive and banal. When every page is large, colorful, and slightly novel, every page is kind of the same. Again, I am struck by the desire to read these pages in the place where they would fit between 6 dailies. The impact of the Sundays would be all that more impressive and new when contrasted to the Monday through Saturday conventionality.

A few words on the volume Sundays with Walt and Skeezix: Sunday Press has done a wonderful job with this volume: beautiful design, great reproductions. This is the largest volume of comics I have ever seen, which does make a completely unwieldy read. You pretty much have to sit it down on a table or bed to read it. The pages contained are selections from 1921-1934, which I assume are the editors’ favorites (and that were available to be reproduced with quality). A few essays preface the comics, but they are in large columns with small type. I couldn’t manage to read Donald Phelps’ essay, it’s just too hard reading that little text on those huge pages (luckily the Phelps piece is available in his “Reading the Funnies”). They are a number of images of Gasoline Alley related toys and games, an interest of the editors of this and the D&Q volumes that I am still baffled by. The dustjacket of the volume shows a daily and Sunday page at 85% of the original, which is impressive. Those drawings are big.

Overall, the Sunday volume is a beautiful book in its own right and an excellent company to the smaller Drawn & Quarterly daily volumes (the Chris Ware design is consistent enough that they look like parts of the same set).