I haven’t been making any notes on these daily comics (though they all have their particular origins), though sometimes I mention them on my twitter posts, for instance, I mentioned that the comic from 11-11-10 was inspired by Ozu.

The night before I had watched Ozu’s Equinox Flower (found in this wonderful boxed set from Criterion). It’s his first color film, but you’d never guess by how beautiful the colors are and how skillfully he organizes the shots to place the color. There’s one series of shots as one of the protagonist comes home that shows the same red teapot in three or four shots at different places in the composition. Which is where the comic came from.

Thanks to the magic of Twitter (a retweet from @Ozu_Yasujiro) I found this great fansite and this image of one of those teapot shots: 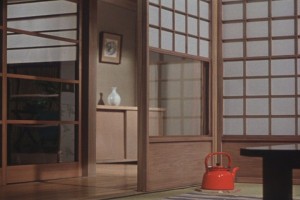 The red of the teapot is so vibrant and so in contrast to the rest of the scene that it seems to almost float in front of the rest.