1. A friend pointed me to the website One Sentence where are posted, in blog format, stories of one sentence in length. They seem to be all autobiographical (though as with any story, who can say?) and not particularly good, but I'm intrigued by the idea of narrative brevity and constrained format.

1.1 Constraint in art has been a particular interest of mine for a long time. Briefly, I mean a purposeful use of rules decided upon before the creation of a work, generally differentiated from conventional rules such as grammar. For some particular uses in comics see my blog posts here or the Oubapo America's page on constraint.

2. A great portion of these single sentence stories rely upon what is implied by the author and what is inferred by the reader. Much like comics, all the information is not there, but we can fill in what is not explicit.

2.1 A superb example: "For sale: baby shoes, never used." Attributed to Hemingway, though I haven't found a reliable citation for it. Either way, the concision here is countered by the implications of what is written.

3. I had been paging through the new collections of Hank Ketcham's Dennis the Menace from Fantagraphics at the bookstore. Not immediately taken with the single panel comics, I checked-out a retrospective of the series (Dennis the Menace: His First 40 Years from Abbeville Press) from the library, expecting to find more comic strips.

3.1 It turns out the comic strips I remember were only the Sundays of the series (an odd variation on the ways strips differentiate dailies and Sundays). The strips I found in this collection turned out to be much less interesting than the single panels.

4. The single panel comic seems most used for the purposes of a gag, as seen in The New Yorker, The Far Side, and others. I've not been particularly found of this genre. Most of the Dennis the Menace panels are gags too, but a few of them point to something more.

4.2 The form seems ripe with possibilities.

5. In his Case, Planche, Recit, Benoit Peeters discusses individual comic panels — those within a series of panels — as looking back to the previous panel and looking forward to the next. They are both individual and collective. We don't read one of those panels on its own, or if we do, they are without context, appreciated on that level for humor (as you see done on a number of blogs) or on a visual level for the quality or style of the art.

5.1 Single panel comics, on the other hand, stand on their own as a complete work.

6. The single panel comic, like its brethren in a longer work of comics, looks backwards and forwards. The difference being that what exists before and after is implied on some level by the single panel and inferred by the reader.

6.1 We might relate this in some way to McCloud's "closure", but I believe the implication of the author/artist is what creates the events in the gutter that surrounds the single panel.

7. The implied narrative is directly related to the density of content in the image and the the word-image interaction. The greater the density of content in the image, the more room there is for inference and the creation of the narrative past and future. The words underneath or within the image similarly create a sense of time having passed and continuing to pass. Words rarely exist in isolation in these panels, rather they are part of a mostly unseen dialogue.

7.1 This sense of narrative time is one place to look for the difference between a single panel comic and an illustration.

8. The terms "compressed" and "decompressed" are often used to describe narrative styles in comics. The use of these terms is relative to some platonic ideal of comics narrative probably related to the "golden age", because one can't consider any narrative to have some kind of original length which is then shortened or lengthened. I found these terms problematic to use but have no better ones to offer.

8.1 In a sense, single panel comics can be read as compressed narratives. They could be shown in more panels but are instead only one. This can lead to a certain density of information and use of shorthand. Reading the comic is often reliant on assumed context and pre-packaged signifiers.

9. Not all single panel comics work in this way. Some are very much an illustration and text that work together to create a gag. A different use of the word-image interaction.

9.1 For instance, see Silent Kimbly (picked from the WCCA nominations), where the strip is generally based on a humorous visual pun, more illustration with text than comic narrative. I don't see a story, a before or after, in it. (Which isn't to say it's a bad comic, just that it's not what I'm looking for narratively.)

10. As I am interested in the narrative possibilities of the form, I'm less concerned with simple gag panels.

10.1 Perhaps this is a call for narrative single panels. A story in a single panel. Something more than a quick laugh.

10.2 A challenge to create narratives constrained to one panel, word and image.

11. To me the most interesting single panels, contain a number of elements which work together to create the story: characters, objects, settings, and, of course, words.

11.1 A side-effect of this may be closer attention paid by the artist to compositional elements, since all the attention will be focused on the single panel, rather than spread out across many.

11.2 In the Dennis the Menace series, much comes through from the directed gazes of the characters or the expectation of the character's reactions to the action seen in the panel. There is enough information to set-up the narrative past and future. 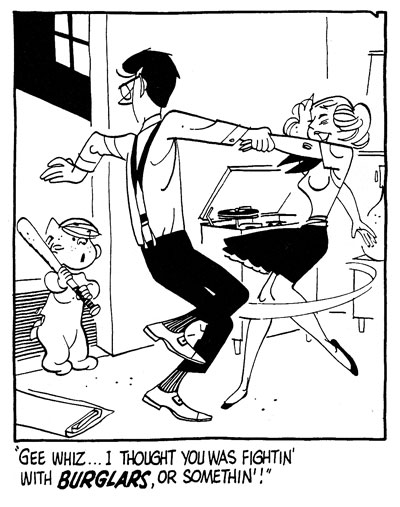 12.1 You have to appreciate not only the movement of the parents in this one but also the joyful smile on Alice's face. The blacks all point inward to the area between the parents, that is, the space of movement. Narratively, this is more than just a word/image gag. We can fill in the past with Dennis waking to noise coming from downstairs, as well as the parents taking a chance to enjoy some time with their troublesome son off to sleep. We can even imagine what happens after, the laughing parents trotting their son off to bed or maybe having him join them in dancing about the room. 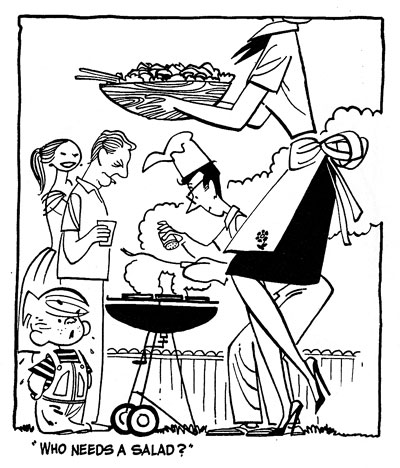 13.1 This is a masterfully composed panel, with multiple planes of depth as well as numerous different heights. Everything fits together into the space so perfectly, from Dennis down in the corner to the giant salad bowl hovering over the heads of the guests and Henry. The smoke going off the panel and breaking the border is a great touch that Ketcham used rather frequently. The text here doesn't make the panel funny, but it does work in conjunction with the relative size of the salad bowl. Perhaps it is just an unsuccessful gag (I don't find it funny), but I don't care.

[Originally published at: http://comixtalk.com/Panels_and_Pictures for my Panels & Pictures column.]