By way of a column by Jennifer de Guzman where she is lamenting the lack of depth and breadth in comics criticism/blogs, I was lead to Katherine Farmar’s two part (part one, part two) comparison of a page from Gaiman’s Sandman and a page from Matt Fraction’s Thor. She is mostly concerned with the text, with the prose itself, and makes good points on the comparison and relative uses of text in each page.

But, she asserts that Fraction’s page is, in one sense, better than Gaiman’s because “the art is given something to do other than provide a visual image of what we’ve already been told in the captions.” Gaiman’s page is text heavy and the image acts more as illustration of the text, but I’m not sure the Fraction page is much better. It is a less direct illustration of the words, yet still not exactly providing information that is not in the text. Farmar states: “The captions don’t tell us ‘Loki ate the squirrel’ — that’s left to the art. Likewise, the captions don’t tell us that the wilderness Loki was wandering through was snow-covered and windswept — again, it’s left to the art to convey this.” But the text implies that Loki ate the squirrel: “It was the first edible thing he’d seen since being cast away. This is no feast for a god, he thought. This is an unspeakable obscenity, he thought. But still: he gathered wood from the tree for a fire.” And it does say that the squirrel was “frozen to death in the snow” which leaves out “windswept” but not “snow-covered.”

I’d argue that the images on Gaiman’s page (drawn by Kelley Jones, I believe) actually does more for the page than the art on the Fraction page. The art on the Sandman page rhetorically supports the text in the way it is laid-out. Let’s take another look at that page. 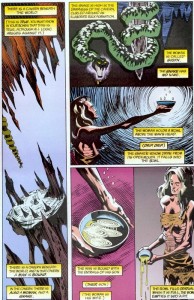 Page from Sandman by Neil Gaiman and Kelley Jones

Panel one is a page tall panel. The text is split up into four caption boxes, two at the top and two at the bottom. “There is a cavern beneath the world” is repeated in the first and third boxes, one at the top, one at the bottom. The first thing I noticed in reading this page was the long movement down the page I had to do in getting from caption two to caption three. This downward movement metaphorically recreates the long movement from above to below, from the world above to the cavern below. The depth is accentuated by the panels size and placement.

It’s a long jump back up to panel 2 at the top of the second column of panels. The snake is “high in the darkness” and once again the reader’s eye movement (guided by the lay-out) acts in concert with the location of the represented contents of the panel.

From here the text tells of the snake’s venom dripping downward, again, as the reader’s moves down through the page, this time at a slower pace than the previous downward trajectory. Panels three and four trace this motion down, then panel five moves to the side, just as the woman moves aside to empty the filled bowl.

While all that does not add to the content of the prose it does add weight to the narrative. It makes the prose more powerful and more memorable, I think (like Katharine, this section is one that clearly stuck with me). This is similar to the way you could have a sentence of prose and a line or two of poetry about the same content, but the poetry through rhyme/rhythm/assonance/alliteration/etc will have an enhanced effect. 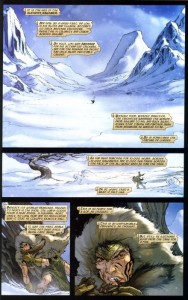 Page from Thor by Matt Fraction and Patrick Zircher

The Fraction page on the other hand (drawn by Patrick Zircher) gives us a conventional zoom-in sequence. While the first panel, by its large size and the contrasting size of the figure, does emphasize Loki’s isolation, the rest of the panels are not so rhetorically weighted. They just zoom in, there’s Loki with the squirrel. It’s not bad comics, but there’s no extra oomph to it.

At the end of her second post Farmar writes: “The aspects we (or at least I) struggle with are the aspects that are unique to comics: the nature of the interdependence between words and pictures on each page and in each work is one of those aspects…” We have to remember that the work of that interdependence is not just what is said and what is shown, but how the two are combined visually on the page. That is one area where comics are uniquely comics.