“Rebus”
from March 7 – April 20, 2014,
at the Craddock-Terry Gallery of the Riverviews Artspace in Lynchberg, VA

Gallery page on the exhibit

Rebus is five person exhibition of text and image based art comics. The artists featured are Warren Craghead, Bianca Stone, Derik Badman, Andrew White, and Sarah Ferrick. This Craddock-Terry Gallery exhibition will include poetry comics and ‘zines as well as original drawings. Artist workshops will be offered in conjunction with the exhibition during which children and adults can learn how to create their own comics and ‘zines. The exhibition opens at 5:30 pm on First Friday, March 7 and will be on view through April 20. Craddock-Terry Gallery Hours are 12-5 pm Wednesday through Sunday or by appointment.

Click here to read The Burg’s coverage of Rebus. The Burg is a weekly arts and entertainment guide produced by The News and Advance.

The image at the top of this post is a photo Warren took at the opening last night, showing my comics (all 4 panel strips from the past year or two), hung in a 5-7-5 format like a haiku. 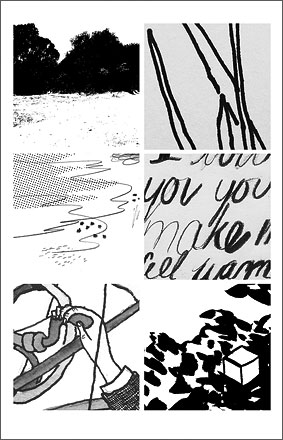 Warren Craghead put together an anthology featuring the artists in the show as well as curator Barbara Bernstein. It’s a 36 page black and white book you can order from Warren.

A few of us did some collaborative work for the book. Andrew sent me a folder of photos he took on a trip to Morocco and a list of text from his recent pages at Comics Workbook. I used a bunch of those photos and the text to autogenerate a bunch of six panel pages with my comic making program. I sent those to Andrew and he redrew versions of some of them to make a multi-page comic. I also used some of the photos and text to make my own 6 page comic. Later, Warren took the same pages I sent Andrew and drew something based on them (I haven’t seen it yet).