I originally posted this quote at The Panelists on February 27, 2011. 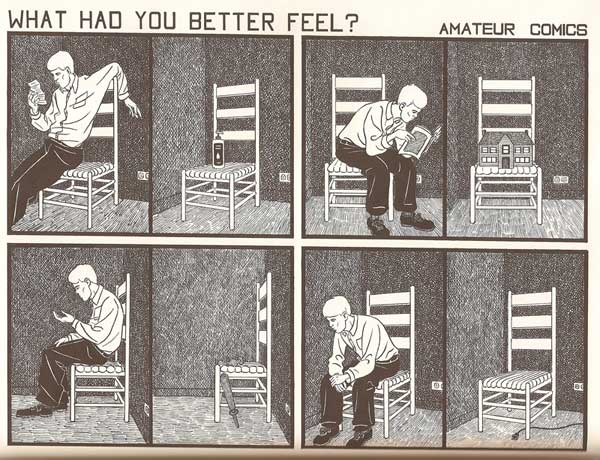 I think of comics in terms of collage because it provides me with a simple and non-threatening way to get started on a comic: just put things together. I guess I define collage broadly as the art of juxtaposition, and even though that’s hopelessly vague as an art-historical definition, it sort of makes sense when applied to comics, which are basically juxtapositions of little drawings, or juxtapositions of words and drawings, or words and a drawing, or maybe things in a single drawing. I’m not that interested in academic argument over whether all collages are comics. I’m more interested in the freedom suggested by the collage model. The alternative, or one alternative, is to think of comics as a story-telling medium which absolutely frightens me, because then you get into soul-killing rules about dramatic arcs and conflict and character development. Storytelling tends to champion a linear effect. Collage, on the other hand, aims simply for connections–sometimes linear, but sometimes intuitive–or counter-intuitive or absurd.