Yes, I spoil the larger plot points. Isn’t it the journey that matters, anyway?

I already wrote briefly about Phoenix Vol. 2 in my post on the structure of the series. It’s odd writing about this book the morning after watching the Battlestar Galactica series finale as there are some very clear similarities to the two stories, though how they are told and where they focused are completely different.

With Future, Tezuka begins his story in 3404 A.D. over 3000 years after volume 1. Earth has been mostly destroyed by unnamed calamities (though I assume, based on Tezuka’s other stories that these calamities were cause by humanity) and humanity lives in five large underground cities. Masato, a space patrol officer, lives in Nippon, an underground city controlled by a giant computer called Hallelujah. Masato’s companion is Tamami, a member of an alien race called Moopies (Tezuka’s not so good with his made-up names), creatures who can turn themselves into any form and have some kind of mental projection power that allows them to project humans into an imaginary landscape (kind of like Star Trek‘s holodeck or the Cylon projection in BSG). Unfortunately for Masato and Tamami, Hallelujah ordered all Moopies murdered, and Masato’s boss, Roc, discovers their secret. Masato refuses his order to murder Tamami so they flee Nippon onto the surface of the now most inhospitable Earth.

In the excitement over the two fugitives escape, Nippon’s Hallelujah computer ends up fighting with the computer controlling one of the other five underground cities, Lengud (based on a map shown at one point, an analogue for Moscow). A nuclear war is started, and all of humanity in the five cities are destroyed by nuclear attack on each other. This destruction is explicitly caused by the computers, in a way that, to me, seems completely illogical, but is the classic fear of computer’s acting on some crazy logic of their own. Tezuka doesn’t really dwell on the issue, the computers end up seeming completely irrational like a madmen.

In this early part of the story, Tezuka seems to be arguing against giving technology too much control over our lives at the expense of our humanity. Hallelujah regulates Nippon. We sees an argument between Roc, who carries out the computer’s orders, and the mayor of Nippon over people dressing in nostalgic clothing and over what they can eat. And in the end the computers destroy everyone including themselves. This technology and humans blindly following its orders are contrasted with acting human against the computer’s orders. Roc, who explicitly follows Hallelujah’s orders, actually breaks up with his girlfriend on the computer’s orders. In a contrasting scene, as Masato decides he can’t kill Tamami, he cries to her: “I’ve been cold-hearted for a long time… a machine… like Roc! You’ve finally made me think like a human!” (25) It takes an alien to bring Masato back to his humanity.

Masato and Tamami do not die in the nuclear holocaust. They find shelter with an extremely old scientist who lives with robots and test-tube lifeforms in a special structure on the surface of the planet. This scientist is Dr. Saruta, the second Saruta in as many volumes of the series, though certainly not the last. Like his predecessor, this Saruta also has a large bumpy nose, a feature that brooks no dissent on the similarly named character’s identity. Saruta has spent his life trying to recreate animals and people through science, but his creatures fail as soon as he tries to release them from their large test tubes (again technology fails).

The Phoenix comes to Masato and shows him a vision of the microcosm and the macrocosm. Life at all levels, where Earth is but one cell. It tells him that mankind was on a “mistaken course” and must be destroyed and reborn. Masato is tasked with watching over it. It is about halfway through the book that, in the wake of nuclear destruction, this scene occurs. Masato’s companions die, and he is left alone for millennium. He tries to create robots, he tries to create life forms, and finally he just lets some carbon, hydrogen, and oxygen into the ocean to let evolution occur all over again. Masato eventually loses all physical form, becoming a sort of spirit consciousness. Life evolves and a detour is taken through the evolution of a society of intelligent slugs. They grow and evolve and form cities, and destroy themselves off.

And then humanity begins again, evolving. Masato, who makes attempt to communicate with them, is looked on as “god” and Tezuka portrays him as a robed and bearded old man, clearly having fun with the cliched western image of God. As the humans evolve, we end up back at that hunter from Volume 1 searching out the phoenix.

This is more plot than I like to normally summarize, but it’s hard to cut too much out without confusing the story. Tezuka has created a hopeful apocalypse. Once again, a moralistic tale about mankind destroying itself, yet offering hope that mankind can, to quote the phoenix at the end of the story, “succeed” “this time,” “realize his mistakes,” and “make use of the life bestowed upon him.” (285-6) Tezuka does not here offer what use of life is the non-mistaken way to go, though I think many of the other volumes in the series attempt to answer this question. Like many apocalyptic tales, this is a tale laden with religious thought, in this case Buddhism. I wish I knew more about Buddhism in reading these volumes. Perhaps I should have reread Tezuka’s Buddha before taking up Phoenix, as the more I read Phoenix, the more I see the Buddhist themes. These two series, my favorite of Tezuka’s that I have read, seem to be an excellent paring.

This volume’s focus on the larger death and rebirth of humanity makes it a kind of macrocosm of the series as a whole. This is both the beginning and the end, or else, as I discussed in a previous post, a reset point between future and past. In a reading where this story is the end of a series organized non-linearly, “Future” offers hope after a long cycle of suffering. In a reading where this story is the reset point in a series of circular narratives, “Future” is hopeful yet less optimistically so. The humanity of the series goes through this point many times, yet never succeeding at erasing its mistakes.

(I won’t get into specifics of the Battlestar Galactica similarities. I think they are fairly obvious from my summary above.)

A few interesting pages to discuss: 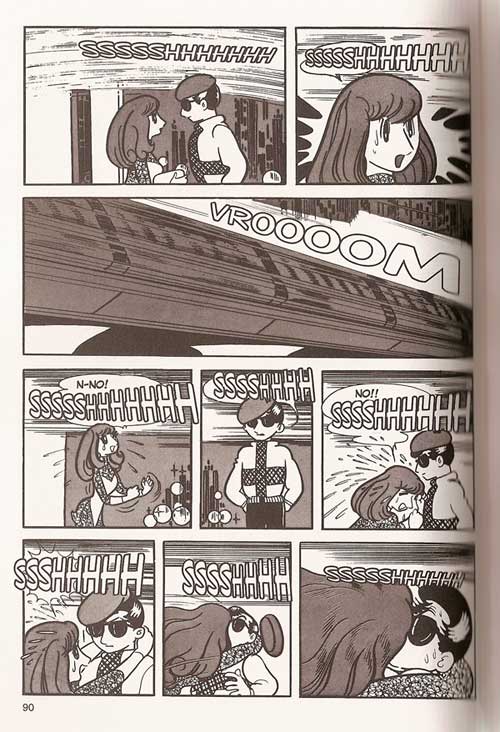 This page shows Roc breaking up with his girlfriend at the computer’s orders. As a train rushes by, he coldly breaks up with her, she cries, she kisses him, and, on the next page, he pushes her away. Instead of showing us the dialogue, Tezuka obscures it with the loud sounds of the train. The only words we see are the woman’s no’s. The body language says it all. Roc stands straight up, unmoving, hands in his pockets, trying to follow his orders as cleanly as possible. The woman lets out her emotions, she moves, she cries, she kisses. He is like a machine, while she is human, emotional. Later, Roc expresses his anger at the computer. He didn’t want to do this, but he followed orders. I just love the way the scene, one that is filled with words, is shown almost wordlessly. 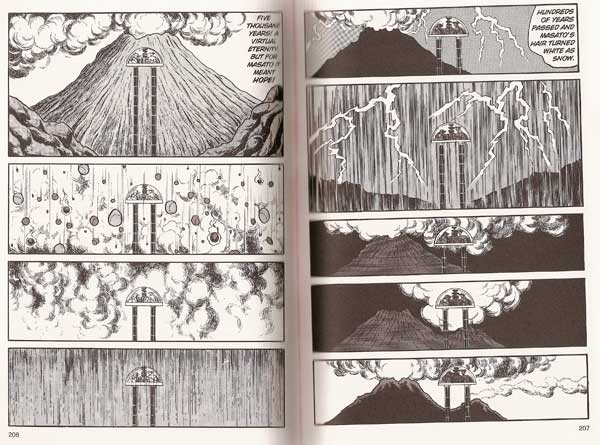 Much later in the book, time passes as Masato stays mostly holed up, alone in Saruta’s base. Tezuka goes back to the geologic events like those shown at the beginning of Volume 1. The base (and thus Masato) stands there unmoving as around it the world changes. The contrasting repetition of a foregrounded object with varying backgrounds is a variant on a core comics element of characters moving around in a stable background. The previous three pages of this volume actually feature such a sequence, where Masato moves around inside a room. The room remains an unchanging background, while the character changes positions, showing time passing. A similarly organized series of panels featuring a foregrounded character unmoving with a varying background might be more ambiguously as movements in space/place. For instance, a character in the foreground with a series of landmarks behind them could be read as travel. Here (above) Tezuka foregrounds an unmoving object so we have to read the sequence as time passing. 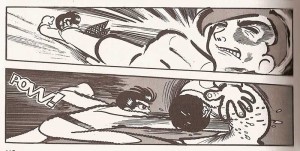 This is the final two panels in a page showing a fist fight between Masato and Roc (the one with the scarf and belt). What interests me in this panel is the thicker, brushy lines used in these panels. Throughout the book Tezuka tends to show characters at a distance. Close-ups are often done in small panels. This is a rare place where he shows an extreme close-up at a large size. He creates extra drama with the extreme depth of field in the first panel as well as the expressive lines on the fist and the edge of Masato’s head adjacent to the fist. The second panel has a strong horizontal movement, which, as the last panel on the left side (we are reading left to right in this flipped translation) of a page spread, pushes us onto the next page. Note also the thick wavy lines on the characters as they vibrate with intensity and the very thick lines on Masato’s open hand. These are brief stylistic variations for Tezuka which I thought worth pointing out.

Next up: Volume 3 which features two shorter stores, “Yamato” and “Space.”