This post originally appeared at The Panelists on January 13, 2011. 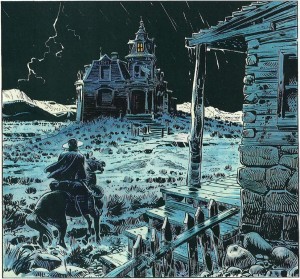 This panel from Blueberry: The Outlaw is certainly a dramatic, dark and moody, well-crafted image. The panel suggests a whole story surrounding it, a previous moment, a next moment. Alone it offers all sorts of possibilities and questions. Who is this figure on horseback? Why is he approaching that run-down gothic house which seems so out of place amongst the empty landscape that surrounds it? Who lives/lived in that house and what will the rider find when he gets there?

A certain strangeness infuses the scene. The odd house evokes a horror setting (not just for the Psycho reference which I never would have noticed if Craig hadn’t mentioned it). Is this the start of a ghost story? Lightning flashes in the background, illuminating the hills in white, a line that cuts across the panel. The style is realistic: proportioned figures (human and equine) and background, shadowing and texture that attempts to replicate some sense of reality. Yet, as we look closer, we can see rain falling on the roof of the building in the foreground and dripping over its edge. The rain doesn’t fall anywhere else. There is no indication of water anywhere else. The rain adds to the dramatic almost clichéd mood, yet it is also at odds with the stylistic realism. The colors too (done by the artist himself, I feel I should note) work both for the mood and against the realism. The monochromatic blue is perfect for a nighttime scene with that single spot of yellow to draw the eye and generate some plot-based tension.

This panel made me want to read the rest of the story, and it provides a lesson in taking the part for the whole. The drama that this panel evokes, the gothic horror, the mystery, begins and ends on one page. It starts with this panel and is deflated with the turn of the page. There is no real mystery, there is no real surprise. I tried to read the story, really, but… I couldn’t get through it. I’ve had this growing interest in westerns over the recent past, mostly films, finding examples that are more than just rote genre exercises. I’ve wondered about western comics, a genre that seems to have mostly disappeared. Many westerns are about individual heroes, and all the western comics I can think of are, from those based on tv/film stars (Roy Rogers, Gene Autry, Johnny Mack Brown) to those that seem are more superhero-esque (Blueberry, Jonah Hex, Rawhide Kid).

I realize now that what I like in the westerns I enjoy most is not the wandering gunfighter, the “man with no name” type, but the clash of characters and society, of society forming in a chaotic (if not lawless) setting, and characters fighting with and against their own desires and that of others: Deadwood, The Man Who Shot Liberty Valence, Johnny Guitar, Canyon Passage, Stage Coach.

I, for one, am glad Jean Giraud became Moebius, as the latter’s work is, to me, more interesting.

I feel like I should add some kind of brevity disclaimer for not better backing up some of my statements. When originally discussing this series, we said “about 500 words,” so I wrote both of my posts with exactly 500 words.

Your first paragraph reminds me, in a tangential and askew way, of a book that surfaced while I was cleaning my office the other day: The Mysteries of Harris Burdick. I guess the connection that I’m seeing is the ability of a single image to suggest, tenuously, an entire story—or, if not all the details of a story, the feeling of an impending story, the aura of significance that illustrations seem to possess.

Do you know the book? What do you think about that weird feeling of “storyness” that can exist even in the absence of a story?

Nope, haven’t heard of that one.

I think that feeling of “storyness” if pretty widespread in art and imagemaking. It’s hard not to look at a great majority of representational painting and not get that feeling. To take an example of a favorite of mine, DeChirico’s metaphysical paintings are very strong in that feeling. For instance this one at my local museum: http://www.philamuseum.org/collections/permanent/51288.html?mulR=6671

Even in less representational work I often get that feeling. The works of Cy Twombly for instance often have that sense of narrative lurking around the corner. Like his Four Seasons paintings, though you can’t get the feeling with these tiny reproductions, there is text in these paintings that blends with the imagery to create that sense:
http://www.moma.org/collection/browse_results.php?criteria=O:AD:E:5988&page_number=12&template_id=1&sort_order=1

Sure: there’s a whole tradition called “narrative painting,” after all. It goes way back, and I think it’s something Surrealists like de Chirico are invoking in the way they compose their images.

I’m just sort of wondering what makes some images have that feeling of “storyness” and others lack it. Might it have something to do with the “spectator position” being shared with a character in the scene, in this Blueberry panel, for example?

I love THE MYSTERIES OF HARRIS BURDICK, though I wonder how much its sense of “storyness” comes from the mix of Van Allsburg’s images with his evocative, single-sentence captions…words and pictures, just like comics…

On his website, Van Allsburg encourages kids to write full stories based on BURDICK, here: http://www.houghtonmifflinbooks.com/features/harrisburdick/introduction.html [.]

Derik, you’ve got to read BURDICK –it’ll take you five minutes–and then check out Robert Ray’s THE AVANT-GARDE FINDS ANDY HARDY, wherein Ray makes the immodest proposal to turn film studies into surrealistic and/or Oulipoian games! (You’ll love it, you formalist, you!) Ray has a nice section on BURDICK.

That Ray book looks totally up my alley, Craig (I’m also a big reader on Surrealism). Thanks for the recommendation (and there are even used copies for under a buck!).

Just looking at a couple images and the intro to the Burdick book it reminds me of the images Raymond Roussel had made for his Nouvelles Impressions D’Afrique by Henri-A Zo. On which more here: http://OFFLINEZIP.wpsho/archives/new-impressions-of-africa-by-raymond-roussel

And the images with accompanying text here: http://emamo.free.fr/text_fr/roussel.htm

I’m not sure we’re sharing the spectator position with Blueberry. Or at least we are sharing his position and taking a position of viewing his spectatorship.

For me, this panel’s “storyness” probably boils down to a combination of generic cues (cowboy-esque figure on horseback, creepy house in the middle of nowhere) and the placement of it as a kind of inbetween time. It sits narratively (even out of context, even moreso out of context) at a threshold. Blueberry is approaching the house, he’s not there yet, but it’s in the picture. The image feels incomplete, like a person who suddenly stopped in the middle of walking with one foot still off the ground.

I don’t think that can be generalized to all images with that “storyness” feeling. I think text could also play a big part in comics panels.

I think Derik’s right; I don’t think you can make storyness be about just formal issues (like position of the viewer.) It’s surely about cultural/social/genre cues as well. You know before you see a genre comic that there’s going to be a story; the storyness in historical paintings would be in large part because of a knowledge of the genre or a recognition of the scene itself, etc.

I love that you’re making your pieces 500 words exactly. You are such a formalist!

If nothing else, I am a formalist.

I’ve done a lot of writing projects that were word restricted. It’s not all that different from most comics which are page restricted in different ways (like the 8 page short story in re those recent Toth posts at HU).

Almost any freelance writing project is going to be word limited. Not usually to exact word count though.

i’m all for moebius’ experiments but for blueberry is what i go back to most naturally. of course i don’t know what the english translation is worth, but there’s just something so joyously dynamic about these comics, formulaic as they are (& giraud is quite good at making you forget the formula). that said, lately i’ve gotten into jijé’s jerry spring which, while usually acknowledged as the inspiration behind blueberry (giraud, like franquin & morris, learned most of his craft from jijé), is something else altogether. anyway, nice post, interesting series.

What little examples I can find online of Jerry Spring (a page or two from the recent integrale volumes from Dupuis) look really nice. High contrast black and white, kind of Toth-looking.

the stories are contemplative and unsophisticated, but full of charm. i would have hated that stuff as a kid. 🙂

seriously, it’s kind of hard for me to say, i really love these comics but they’re not “great stories”. in fact you could throw all sorts of criticisms at them (how they’re kind of careless & uninvolving) but that would sort of miss the point. with comics like these, it’s almost like you want to read the drawing more than the story.

i believe there’s been a bit of a jijé revival recently, with the jerry spring reissues & the recent spirou et l’aventure fac simile, which i’m looking forward to finally read at last. jijé single-handedly tutored pretty much all of the first-wave marcinelle school, but mostly he was an incredibly versatile draughtsman. hell, we’re only finding out now he was also an accomplished (post-)fauvist painter.

What goes down in the story? I’m curious.

Umm… he goes to the house and the woman who lives there (who he knows already) is living there (as he expected her to be)… Then there’s something about a dude dressed like a woman who is a sharpshooter and keeps his gun in a violin case that no one ever realizes because western guys don’t want to hear any stupid violin music. Then I think maybe the sharpshooter assassinates someone. This panel is in the second half of the volume, so it was at this point that I was really getting sick of reading it.

Funny, I expect I’d enjoy reading this comic. Even if I didn’t, I’d have to find something to say about the (cue Hatfield’s music) interrelation of theme and form. What I’m hearing from you, Derik, though, is that Blueberry rewards on the level of the single, evocative image, not so much on the level of architectonic form (let alone subject matter).

Well, it didn’t reward me. But, hey, I’m the type who was thrilled to get a book in the mail that is filled with pages of comic bricks.

I’d settle for the riff from Kashmir….

I might add that the book here in question “The Outlaw” is the fourth volume of a megastory that runs through the ten last books that writer Charlier was directly involved in. Reading it out of context might be confusing, though I don’t know whether that was what bothered you, Derik?

Thanks for these great posts, and welcome to The Panelists! — I’m only just catching up here.

Not confusing, no. I think perhaps the adventure genre is generally not my style, particularly for westerns. Unless there is something very compelling about the artwork, and Giraud’s realism is not something I found especially attractive (as opposed to the realism of, say, Raymond or Drake).

I’d settle for the riff from Kashmir….

Oh, yeah. That would work.