I didn’t really like Flesh and Bone the first time I read it. I’m biased against fairy tales, and the story has elements of that genre, not the Disnified version, mind you, but the darker versions of the past (or the darker version of the present, I guess). But, on my second read (I was interested enough to read it a second time) I realized that’s not really what’s going on here. There are some elements of the genre, but Gfrorer is telling a different type of story, one that seems more in line with Hawthorne (if he were a lot dirtier) or… I’m not sure. The story feels like something from the 18th or 19th century. It clearly is not a present day setting, and the use of witches brings to mind Salem and New England.

On my first reading, the protagonist was a young man, a Werther-esque figure, whose love has died. He wishes to join her in the afterlife, but, fearing suicide would lead to damnation, he asks a young witch for help. From this perspective the story is not so particularly unusual, but, again, on my second read, I realized the real protagonist is the witch herself. It’s a strike against me that I didn’t realize this the first time through, as the book opens on a scene in the woods where the witch is participating in a ritual with other witches and a horned beast-headed demon.

Throughout the story we are much more privy to the actions and therefore the thoughts or emotions of the witch than the young man. The story of a young man seeking a reunion with his love becomes the story of a witch that is, if not in love, at least having some feeling towards the young man, helping him get his wish, and getting some small token in return.

Which is all to say this book subverted my expectations a bit from one read to the next.

There is a conversation in the book between Jadwiga (great name), the witch, and Buer, a lion-headed demonic creature who she speaks to through some kind of spell, wherein she expresses some faith in the existence of love. She hopes the young man will meet his love in the afterlife, “love is a beacon.” Buer, on the other hand, calls love a “delusion” and “mutual masturbation.” This is a key scene in the book, as these words bring together a number of elements in the story. On Jadwiga’s side, perhaps love is a beacon, as (spoiler!) the last two panels of the comic find the young man, dead and dumped in a grave, embraced by his love. They are both poised, lifeless, reclined, yet she is clearly embracing him, first in the grave, then floating in dark space. Is this truly their reunion in the afterlife, a lifeless embrace in darkness? Perhaps it is their beacon in the dark, as they alone appear in the darkness of the panel. Jadwiga, too, seems taken by some kind of love for the young man, and, there is a moment (see image below), just before she puts in place the final part of her plan to cause his death (and reunite him with his love) where they kiss (her price for helping him) and look into each other’s eyes. You can picture an alternate path where the young man falls in love with her. 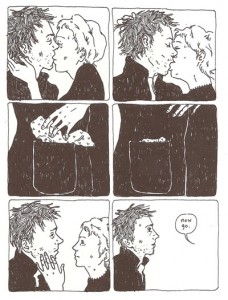 But Buer’s words on love also strike through the story. Is the young man delusional to give up his life for a dead woman? He asks the witch’s help because he is afraid of suicide and subsequent damnation, but isn’t he, by asking the witch’s help, effectively causing his own death as surely as if he had drowned himself? And there is that kiss, where love could perhaps almost bloom between he and the witch, yet it is the same moment where she slips a blood stained cloth into his coat pocket, the clue which leads to his execution for the murder of two children. And if Buer calls love “mutual masturbation,” even this definition seems insufficient for the both the young man and Jadwiga, for we see each engaged in pleasuring themselves. The young man does so while writhing on the grass atop his love’s grave, while Jadwiga ends the story using the mandrake root–sprung post-hanging from the young man’s seed (this is an old alchemical/mystical myth, only one indication of many that Gfrörer put some research into this)–for her own enjoyment (and possibly some subsequent child (so goes the myth)). Neither are mutual acts though, but solitary ones in the context of a death.

Is then, love, both more and less than both Jadwiga’s and Buer’s contentions? It is to Gfrörer’s credit that the answer remains (to my reading) ambiguous. One other nicely ambiguous plot point is the actual death of the young man’s love. Jadwiga uses her magic to see into the past. We see the lover’s together sitting on a bench, then the woman alone on that same bench with a shadowy figure standing before here, followed by a panel of the young man kneeling at his love’s sick bed. In that second panel, Jadwiga lets out a “heh!” which makes me question the identity of that shadowy figure. It’s too easy to read it as the young man based on the contiguity of the panels, but the figure is drawn considerably more ambiguous than that in previous panels (see image below). Jadwiga’s exclamation seems to indicate some more nefarious explanation, one which remains in mystery.

Gfrörer’s style uses a very consistent thin (rapidograph perhaps) line, even the “blacks” are primarily just areas of dense hatching. She uses lines for texture, pattern, and shading to a limited extent such that the panels never seem very dense (except in some darker night scenes) but also never too light. Her pages all are six panel grids, a consistency which she uses to great effect through repetition and slight variation in such a way that she is clearly paying attention to the page itself (or the two page spread) as a whole unit rather than just a series of panels.

The book’s opening spread is a great example (warning: part of this image is nsfw): 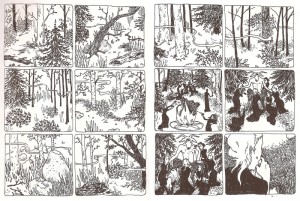 The panels move the viewer through the woods, lead by a sinuous smoky trail. The panels of woods continues onto the second page, before showing us the witches’ rituals on the last four panels. It’s a slow reveal to reach the character of Jadwiga in the last surprising panel. We don’t yet know she is the protagonist. The turn of the page then starts a new scene of the young man approaching her house. 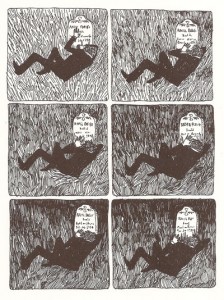 This later scene of the young man at his love’s grave is more direct example of repetition and slight variation, where the hatch marks slowly increase in density to show the coming of night. This could easily have been shown in two panels or one panel (the previous page takes place in the day, so placing the next panel at night would have been sufficient), but Gfrorer gives space for the time to pass, increasing the reader’s sense of time and emphasizing the young man’s isolation and resolve.

Another effective use of the page: 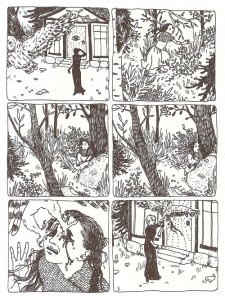 Jadwiga’s owl flies off the left side of the first panel. The panels then follow the young girl who is trying to hide. We see her from a distance and then panel 5 hits with a close-up, where the owl returns from its voyage off-panel, coming back in to the panel from the left side. The owls off-panel trip is made visual manifest through the layout of the page, plus, it’s a shocking return.

Subsequent to this, I read some of Gfrörer’s Ariadne Auf Naxos minicomics (earlier works, I think) and found them much less compelling. They all read like unplanned fictional autobiography as automatic writing mixed with fan fiction (Doctor Who appears a few times). Flesh and Bone is a more mature work (in many senses of the word), and hopefully a sign of even better things to come.