Got back from Small Press Expo (SPX) in Bethesda, Maryland last night. Drove down Saturday morning and stayed for the short weekend. This was definitely the most fun I’ve had a comics show. I expect some of that is having stayed over the night so I could hang out after the show. For other shows (like Mocca or the Brooklyn shows) I tend to just go for the day, walking around, seeing panels, chatting, and then leaving, which can make further socialization harder as you rarely get to just be in one place and talk to people. It also helped a ton that there were people at the show that I felt I was friends with and who I knew were excited to talk with me too. A big part of these shows is clearly the social circle element, and if you don’t have that social circle you are just floating around on the edges. That’s partly why I haven’t made it to SPX before, I don’t have a publisher or a collective or a school group, or even a local comics-making buddy, that I could go with, so I feared I’d end up by myself.

But this year, Simon Moreton come over from the UK and Warren Craghead came up from Virginia to table together. And that’s what made me decide I had to go this year. I’ve interacted with both online a good bit (and got to meet Warren once) and feel a certain comics making kinship with both. Andrew White was also going to be at the show without a table–I really enjoyed meeting Andrew a few weeks ago at Pat Ausilio’s Comics Barbecue–so there’d be someone else table-less to wander around with.

And thankfully (to those guys especially) it worked out and I had an awesome time. That’s probably the most I’ve actually talked (as opposed to written) about comics with people.

-Finally got a chance to hang out with L Nichols and her partner post-show. I think I first met L at MoCCA a few years ago and have only really gotten to chat briefly at shows since then, but I’m always impressed by the varieties of her activities she’s reporting about online (comics, painting, blacksmithing(!), canning, coding). That process of meeting a few times and then hanging out connection probably undoes my earlier concerns about going to the shows in the first place. It becomes a self-perpetuating cycle if I don’t go to the shows because I don’t know people, then I won’t go the shows and meet people (though online social networks help that some). Makes me wish I had had time to sit down with some other folks at the show.

-Lots of standing around Warren and Simon’s table talking (hopefully not keeping people from looking at their books!). I learned it’s way easier behind the table if you are hawking someone else’s work. You can avoid any conflicted feelings about self-promotion or ego, and just talk about someone else’s work’s greatness without feeling any rejection if the people pass.

-Briefly talked with 3/4s of the Comic Books are Burning in Hell guys (ran into Chris the other 1/4 a few times too). I don’t think I’ve met Tucker before, and it was kind of strange to hear his voice coming out of a person, going off about one thing or another.

-Kind of weird walking around and just seeing all these people whose books I’ve read over the years, though in many cases it was people I no longer have much of an interest in. At one point I looked up from a book and there was Seth and James Kolchalka talking. But in the fanboy vein, I met Kevin Huizenga and later got a sketch from Anders Nilsen in his new book. I didn’t manage to say much to either, but at least told them how much I like their work. I feel really awkward about those interactions.

-I moderated (very loosely using that word) a panel late Sunday (last of the day!) on “The New Comics Minimalism”. Video is theoretically forthcoming. Unfortunately we had no computer/projector connect so we couldn’t show anybody’s work on the screen, which would have been nice since I suspect there were few, if any, people in the crowd who knew everyone’s work. Panel was Frank Santoro, Jon McNaught, Simon Moreton, Christopher Adams, and Andrew White. I didn’t have to do a lot of moderating, since most everybody was pretty good at talking and asking questions. I don’t know we established much about comics minimalism, but we had some good conversation, perhaps a little too focused on process for people who aren’t process junkies. There was a good crowd (lots of familiar faces up there), though we only had time for a few questions. I’ll post a video link when it goes up.

-Frank said very nice things about my comics which was really flattering, and it was recorded so I can rehear them again later.

-Quotation I never got to use in the panel: “I like “minimalist” comics – not necessarily abstract and without a clear narrative, but something airy like the best painting, something without words so there’s nothing to translate. Just images – like a series of paintings – but sequenced in a way that is interesting to read and decipher graphically. When I saw Lenin Kino I thought, “Oh, it’s like a Luc Tuymans comic,” and I meant it in a good way.” (Frank Santoro, TCJ.com 2013-08-01) [Lenin Kino by Olivier Deprez (Fremok) is awesome.]

-Once again I went to a comics show and didn’t spend all the money I budgeted, but I did get some good stuff, I think. I got a bunch of minis from people who gave me something when I handed them a copy of MadInkBeard no.6 (even though I was telling people I was’t trying to trade the comic, just giving it out free). Bought a few things that I went to the show looking for. Found a few pleasant surprises by new names and a few new comics from familiar names. I slobbered over the new Seiichi Hayashi book Picturebox is putting out (they only had a few copies, didn’t buy one since I’ll be getting a pre-ordered copy in the mail). I have high hopes for that book, as I love his Red Colored Elegy. The only big publisher books I picked up were the new Anders Nilsen (so I could get the sketch) and Fantagraphics’ Barnaby vol.1 (pro tip: go to Fantagraphics in the last 30 minutes of the show for amazing deals, 50% off!).

-Unlike the NYC shows there wasn’t much of an international contingent. A good number of folks from the UK (like No Brow), but I didn’t notice many others.

-Got contributor copies of “Can’t Lose: A Friday Night Lights Fanzine,” which I’m in, from Melissa Mendes (printed on their risograph). Unfortunately the blue ink on yellow paper printing didn’t do my photocomic any favors, as it made my images a little too dark. Alas. I’ll post the original color version soon.

-I managed to miss all the panels except my own, but knowing they would be recorded did keep me from really caring about attending most of them (I wanted to see the Santoro/Shaw conversation but it was first thing and I didn’t wake up early enough on Saturday to arrive in time).

-Warren and Kevin Czapiewski both had newly printed compilations from last year’s 30 Days of Comics, which was heartening to see and a good reminder to start gearing up for this year’s edition.

-I didn’t give out all my copies of MadInkBeard No.6. I didn’t want to be too profligate with them on Saturday and then by later on Sunday when I realized I had a bunch left, I wasn’t sure who to give them too (or who I hadn’t already given a copy too). So I’ll have a few of those to put online for anyone who wants one for the price of postage. I’ll also post a digital version soon.

-The pile of stuff (about half trades, half bought… pretty good average):

These will be making it into my “Every Comic I Read” series, though I may split September into two posts since I’ve already gotten through a number of comics this month (thanks to panel prep reading).

-Read some of these comics Sunday morning before the show opened and there are some definite gems in here. Of course Warren’s and Simon’s stuff is awesome (shame on you if you missed their table), and a bunch of the comics I had pre-planned to find turned out to be good bets like Laurel Lynn Leake’s L3 no.2 and Rebecca Mock’s Solid State, and I’ve already written a bit about Samal Bemel-Benrud’s Abyss.

-I don’t think anyone I voted for won an Ignatz, though I didn’t even vote in all categories because I didn’t know or hadn’t read most of the entries.

-Covers are super important. Make your covers look like the contents. Make them cool, but don’t make them look so much cooler than the inside, because then people will pick up the book based on the cover, page through it, and be really disappointed. That’s not good for sales. I totally picked up Melancholy by Aaron Pittman from the Temporal table just because the cover was so lovely. I ended up buying it and convinced a few other people to get it too when I showed it off. The thing is, the cover is cool and it fits the book. It’s like a colored image from the black and white insides. Similar to the content but enhanced. Cover win!

-Looking forward to next year. Next up, though, is Comic Arts Brooklyn, which I plan on visiting (I’d really love to see Paul Auster but fear that panel will be ridiculously crowded and I dislike crowds).

-I didn’t take any photos, but I attached a shot of some of the comics I got that I’ve already really enjoyed (and plan on rereading soon to enjoy again). That’s (in the order you’d read them as panels): Pittman, Craghead, Czapiewski, Bemel-Benrud, Leake, Mock, Bemel-Benrud, Craghead, Craghead/Moreton, Czapiewski. Sorry it’s a little blurry, here it is again so it can be viewed bigger (need to attach the lightbox effect to those top images). 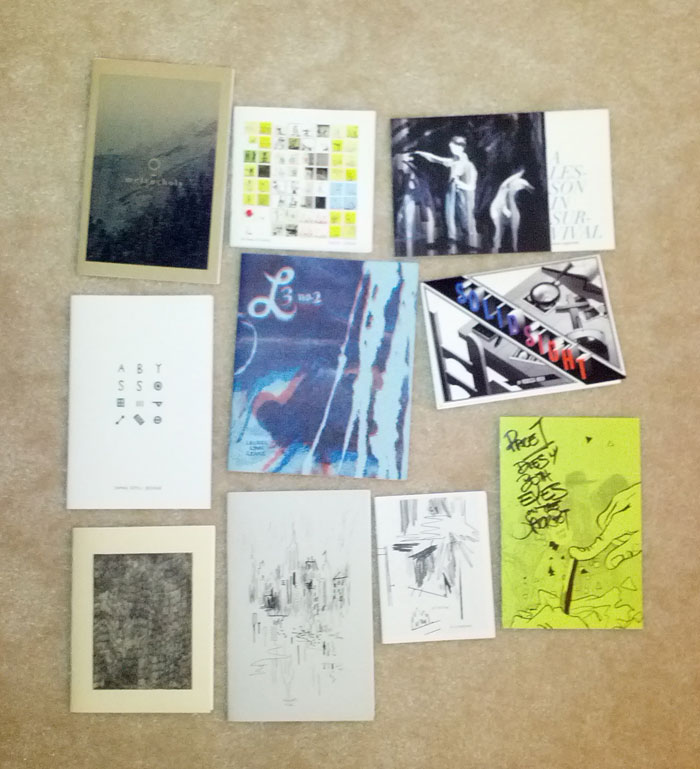