I looked around for reviews of this manga series. Six volumes have come out from Del Rey, yet I can only find reviews of the first (with some minor exceptions where the reviewer just summarizes plot). People seem to pay attention to first volumes and review them, but then no one writes about subsequent volumes (with some rare exceptions: lots of people seem to write about each Nana volume). That’s a shame, as I’d imagine most series don’t really hit their stride early on. Such is the case with Yuri Urushibara’s Mushishi. The manga-ka submitted a story for a contest and won. That story became Mushishi, what I assume is her first series. Naturally, it takes a little while to really find the direction of the series.

I read the first two volumes online in a scanlation. I’d heard some positive buzz about volume one, and the scanlation was a good way to see if it was to my tastes. At first I wasn’t convinced, but I was interested enough to keep reading. By the time I got to the end of the scanlations (a story or two into volume three) I knew I wanted to read more. Now I’ve read the six volumes available in translation (I bought print copies) and whole-heartedly recommend the series, particularly the later volumes (you could get away with skipping volume one and maybe two). In Japan, the series recently finished up its ten volume run, ending its serialization in the anthology “Afternoon” (also home of the now finished Yokohama Kaidashi Kikou). I look forward to seeing where it goes and how it ends (assuming it doesn’t get cancelled (which apparently has just happened to the only other manga series I’m following right now, Aria (Tokyopop))).

The premise of the series involves a form of life called “mushi.” Somewhere between plant, animal, and element, they are mostly invisible to mankind but have effects, often profound, on human life. Ginko, the protagonist, is a “mushishi” a kind of scientist and doctor. His motivations fall between the two: he studies the mushi and also helps people affected by them. The series is episodic, strictly so, very little crosses over from one story to the next other than Ginko himself.

The setting is during an indeterminate time in Japanase history. In the author’s notes to volume one, Urushibara says she envisions the time somewhere between/around the Edo (1602-1868) and Meiji (1868-1912) periods, which leaves a lot of room. The stories take place in rural Japan, in small villages and isolated locations. No hint of samurai or any of the normal and oft-used trappings of the historical Japanese settings are to be found (no ninjas, no battles or wars, no martial arts, no cities or fortresses, no monks, even). These are stories of simple people living often poor lives. In this sense, the story is little concerned with history or historical society.

The original story, now found in the middle of volume one, was set in modern times, though there are only subtle clues to such (one being a toy airplane seen in the background of a couple panels). Urishibara switched the time period to the past after drawing that first story, the only unexplained holdover being the protagonist Ginko’s dress. While everyone else in the stories wears traditional Japanese clothes (kimono’s and the like), Ginko wears pants and a shirt that have a modern cut.

I’m not usually a fan of strictly episodic series, in comics or in television. I like the long term narrative threads and character development that go on, even in the background of series that hold on to a mostly episodic structure. Yet, in Mushishi, I found an exception. Not only are there no ongoing stories, there aren’t even any recurring characters to speak of other than Ginko. Two friends of his appear in two stories each and that’s it. Even Ginko, as a character, is not really fleshed out. One story, “The Fish Gaze,” in volume three offers an origin story of sorts (and is one of the stand-outs in the series), while “The Sound of Trodden Grass” from volume four shows Ginko briefly as a child. Primarily, he serves as the investigator, the explainer, and, often, the voice of reason. He is a wanderer, carrying an odd chest of tiny drawers on his back. He only has one eye, though that fact is not obvious–because he has that manga hairstyle where long bangs obscure one of his eyes–until it is explicitly made use of in a story. 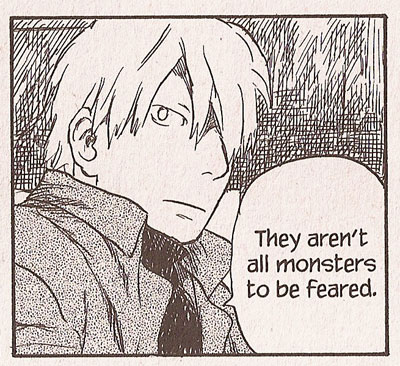 The stories find normal people affected in various ways by different types of mushi. Early on, this takes the form of a disease-like problem, with Ginko serving as doctor. A few stories are inflected with a horror element, particularly in volume one, though this tendency then disappears. The early stories also tend to make attempts at being precise in explaining the mushi and the story world’s unique characteristics. As the the series continues these explanations become less important.

Throughout the mushi are the invisible world, unseen nature–they are explicitly stated as being part of nature, part of life–that affects the life around it, much like germs or bacteria. They are only seen by those with some special quality. The mushi are an explanation but not really a solution or comfort. The affect they have on the world is not always malevolent (though that is often the case in these stories), or it is not always their presence that cause bad things to happen (sometimes it is their lack of presence). At times they serve as a representation of nature or the land on which people live, providing some vital gift to the people, at other times, they are like forces of nature, hurricanes or drought.

As the series goes on, the stories become increasingly about death and loss, often with the mushi serving as a metaphor for emotion, as illusions of comfort, or as agents to pry out the hidden, unconscious, or buried. In “Under the Snow” from volume six, a boy’s isolation and repressed memory of his sister’s death, is echoed by the mushi which cause him to be constantly snowed upon, his body slowly freezing. In “the Snake of Dawn” from volume five a mushi eats away a mother’s memory, leaving her only with memories that she actively thinks on. This memory problem intersects with her absent husband, whom she sets a place for every night at the dinner table, thus keeping that memory alive as many others disappear.

The stories have poetic qualities of displacement and hidden meaning. A second, less literal, meaning is always hidden beneath the stories of Ginko solving people’s mushi problems. Like much good fantasy, they are human stories manifested through the strange, through monsters of a sort. Though, again, in this case the monsters are, within the story world, just another part of nature. They are not aliens or supernatural or magic. That sense of hidden nature is one thing that attracts me to these stories and make them so novel. 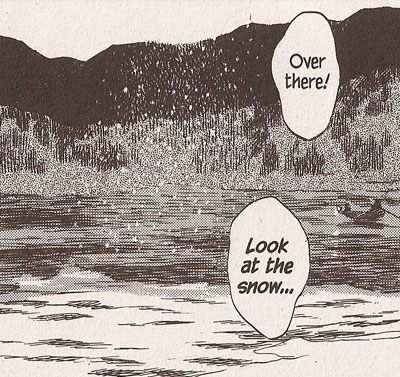 A landscape from v.5.

Urushibara’s drawing style has many familiar elements for a manga, but she hovers somewhere outside of the most common styles. She does not have the decorative excess of much shojo nor the amped up action and slanted layouts of shonen. Her layouts are fairly straight, rectangles, with many larger open panels. The characters tend towards realism (vaguely reminiscent of Katsuhiro Otomo, which I guess is to say some Western influence), and they are portrayed with restraint (no superdeformed transformations, no large eyes, no excess). She uses a scratchy almost rough line that is different than other manga I’ve seen in translation and a lot of hatching adds to this roughness. She also makes excellent use of certain textures, usually rougher more splattery than the classic grey dot tone. In almost all cases the stories take place outside, which means drawings of nature are prominent. The art is highly successful in creating mood through the backgrounds. At times the panels become abstractions of nature, fields of hatchmarks, taking shape into vague mountains, fields, or water. These panels are particularly riveting. 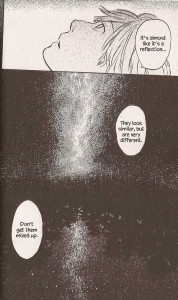 A woman looks up at the night sky, seeing a "river" of mushi from v.6. Also a nice simple point-of-view sequence. (Click image for larger.)

I’ve read the series through twice (some stories more times) and I keep flipping back through it. This manga is unusual, at least for what gets translated into English. I do wonder at Del Rey’s ability to sell this. I went to their website to find out when volume seven would be published (not until May) and found their posted description of the series:

Shortly after life emerged from the primordial ooze, deadly creatures—mushi—came into terrifying being. They still exist and wreak havoc in the world today. One man with a sardonic smile has the knowledge and skill to save those plagued by mushi.

Phrases like “deadly creatures,” “terrifying being,” and “wreak havoc” show a clear misunderstanding, or at least mis-representation of the series. They seem to be selling it as some kind of “guy fights the supernatural evil” series, while Mushishi is considerably more subtle and rich.