Formal experimentation in comics is often overlooked and under-attempted. While one finds bits and pieces of experimentation in various works, rarely does a comic seem to be produced solely as an ambitious experiment. Leif Tande’s Morlac is such a work, an impressive and well-executed experiment where such is the focus rather than a by-product. If the content of the book is of lesser quality, at least it is well-integrated into the form.

The first pages contain a single panel in the lower middle, approximately one-twelfth of the page. A man finds himself at a corridor offering two options for his path, left or right marked by arrows on the wall. The last panel in the sequence shows the man walking towards the T intersection. On the following page we find two panels to the left and right of where the previous page’s panel would have been. Each of these two panels shows the man following the corridor. With the options for his direction, the man has multiplied, as have the panels in which he exists.

(These two scans show a quarter of two pages just below the halfway mark. The rest of each page is blank.)

The next page still holds two panels showing the man continuing on his course in two directions. When he meets a ladder going down on the left panel, the following page adds a third panel below the left panel showing the man climbing down the ladder. Once again he has multiplied with the options, as have the panels. In this way the panels on the page increase with the man’s options. New panels appear on the page in relation to the direction of the man’s movement. If he climbs up, then he appears in a panel higher on the page. The page always holds the panels within a four rows by three columns grid. Occasionally one of the man’s multiples meets some horrible fate and the panel he is in disappears from the page.

(These two consecutive pages show the way the narrative expands into more panels. Click on each for a larger image.) 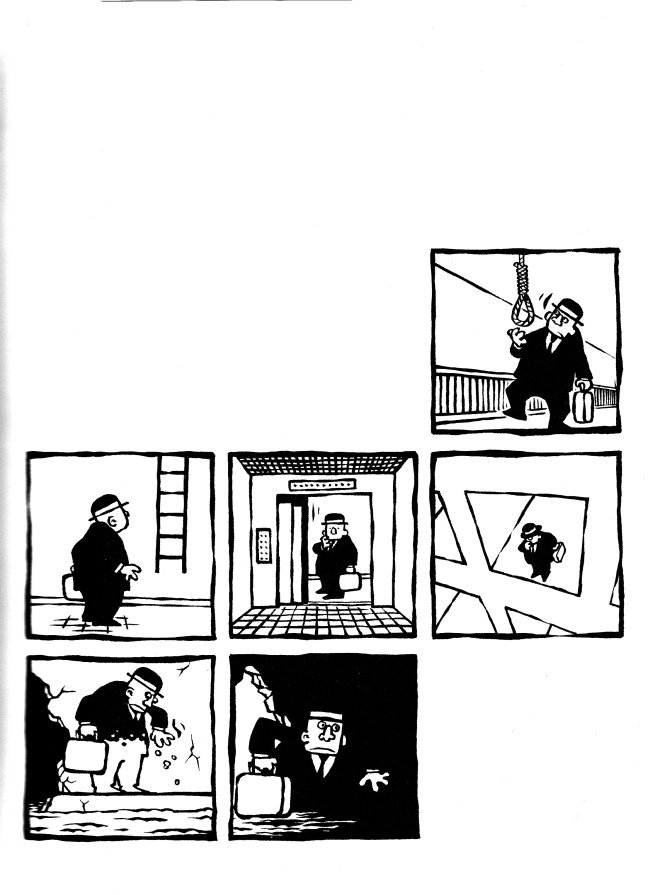 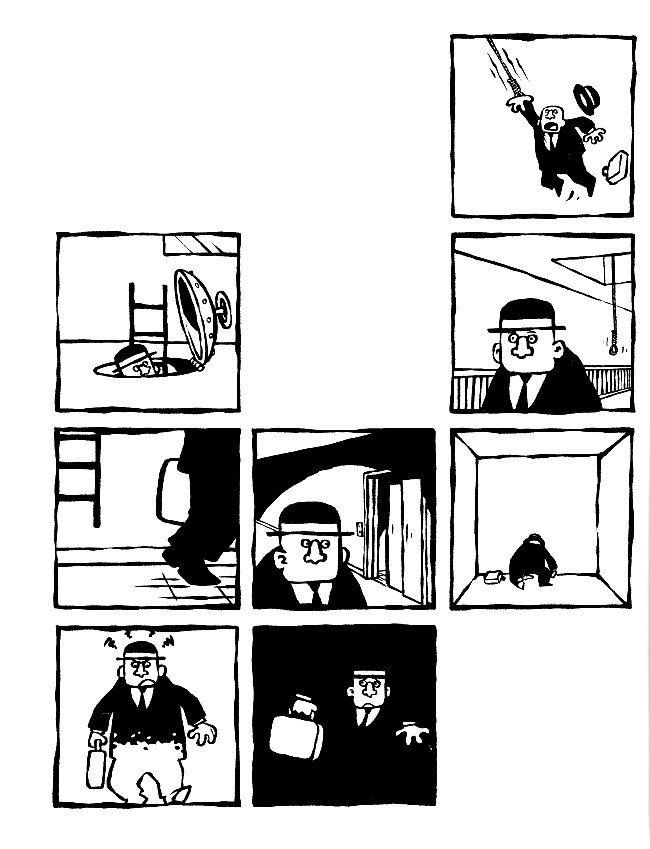 One quickly learns to read Morlac in a different way than most comics. Reading left to right, top to bottom becomes difficult and confusing as one jumps from one multiple of the man to another. A few alternate reading methods offer themselves. The first time I read the book I tried to follow each thread of the narrative, which means reading the same panel on each successive page (following the thread of the fourth panel on each page). This involved a lot of backtracking to follow the places where the narrative forked into other panels. It also caused me to miss a few threads where panels appeared in less obvious places. For instance, in one of the threads the man gets into (or doesn’t depending on the panel you follow) an elevator. On the following page he walks out of an elevator one panel higher than where he got in. But a page later he also walks out of an elevator at the top of the page. In this way panels appear in places where one may not immediately notice where their narrative thread originated.

My second time through the book I read it in two page spreads, taking each narrative thread in groups of two panels: read a panel on the left page and then the corresponding panel on the right. I had to juggle a number of narrative threads at once (up to twelve at some points) but it also enabled me to more easily find the interactions amongst the threads. At times some of the threads intersect with each other: a character moving from one panel to the next; a character seeing events happening in an adjacent panel.

The way Tande has layed out the pages of Morlac explicitly uses the space of the page as both visual and narrative space. Panels that sit on the page next to each other also take place in the narrative in adjacent spaces: space is not time here, it is space. Oddly, this use of page layout, combined with the content of the story reminds me of the old video game maps I used to see in friends’ Nintendo Power magazines, where screenshots of games were placed adjacent to each other as a way to map out the lay out of some dungeon, castle, or town. Those maps also had repeating characters (the player’s character appearing in each screenshot) and a sense of forking paths and narrative possibilities. Let me go back to talk about the actual story…

Inside this formal maze is a maze. The protagonist from the beginning of the story travels (in his multiplicity) through a structure that is not unlike a videogame. He follows corridors, climbs ladders, travels in elevators, goes through doors and trapdoors, falls in holes, and meets other obstacles as well as encountering different creatures: a robot, monsters, an alien of some kind, a (mad?) scientist, a ninja, even some kind of devil. He loses and finds objects (mostly sticking with the briefcase that he tries to hold onto); he fights and lives and dies. If Tande was not influenced by video games (like the Fort Thunder artists) he has at least well replicated many aspects of a certain kind of game.

Tande’s art is not particularly noteworthy. Simple abstracted rendering and a thick line with a wavering width give clear renderings but are not aesthetically interesting.

The title, Morlac, is taken from the Oubapo’s “morlaque”, of which you can see Trondheim’s much simpler example in this post [that post appears to have been deleted by me]. Like Trondheim’s example, Tande’s book can be read as a circular narrative, the last page’s single panel takes us back to the first pages.

In the end, the story itself is not all that interesting. What attracts me to the book and what got me to read it multiple times is the formal play: the way Tande utilizes his structure in different ways. One wonders what could be made of such a structure outside of the multiplying exploring character story. What if the story didn’t follow a particularly character through multiple pathways but followed the pathways to find the characters and their stories?

(While the text in the book is in French that includes only the frontmatter, the comic itself is silent.)